Found this old token in a hole with my first shield nickle (1870). Trying to ID the token. Says THE PALACE across the top, JL RICE Co. in the middle, and SILVERTON across the bottom. Real ruff shape just curious for info. Thanks

There was a palace theater in Silverton Oregon at 1 time but I read it was torn down maybe that was a movie token or for a free tub of popcorn or something like 1 free admission? or maybe from Silverton,Colorado. But there could be many more Silverton's maybe one in Nevada as Silverton would be derived from silver town.
Upvote 2

I believe it is an Oregon token, and I think you’ll find it says ‘A.L. RICE & CO’ rather than ‘J.L. RICE’. There are two recorded varieties (pictures from the Token Catalog website): 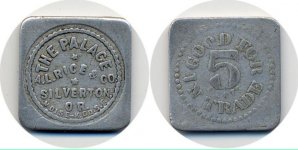 There was indeed a “Palace” in Silverton, built as the “Palace Opera House” in the early 1900s which also screened films from 1909 onwards. It burnt down in 1935 and was replaced the following year by the “Palace Theatre”, which still exists today.

One of the token varieties (which looks more like yours) includes the manufacturer name as “MOISE-K. CO. S.F.” which is for the Moise Klinkner Company of San Franciso. They were established in 1873 and changed name to the “Patrick & Moise Klinkner Co.” in 1930 when they were bought by Patrick & Co. so that particular token must predate the theatre but could relate to the opera house.

Note however that “Palace” was a commonly-used name for various establishments and it could relate to a saloon, billiards hall or whatever. Also, it doesn’t necessarily follow that the Rice company was based in Silverton. Tokens often had the names of suppliers to the establishments that used them, and they could be based elsewhere. A saloon might be using tokens carrying the name of their liquor supplier or a billiards hall using tokens carrying the name of the company that supplied their game equipment for example.
Last edited: Nov 1, 2021
Upvote 10
OP

Thanks for the info, amazing the knowledge on this site, the upper token is exactly what it is, can I ask where the pictures are from? I tried alot of searches with different words from the token and got nothing. Now to try and clean it up a bit. Thanks again.
Upvote 1

demano said:
Thanks for the info, amazing the knowledge on this site, the upper token is exactly what it is, can I ask where the pictures are from? I tried alot of searches with different words from the token and got nothing. Now to try and clean it up a bit. Thanks again.
Click to expand...

The pictures came from the Token Catalog website, as I said:

A searchable online Token Catalog. The Public Catalog is available to all vistors. The intent is to provide information about where these tokens were used (their attribution) and related data. This is a user contribution site and tokens from all states (and countries) are continually added...
tokencatalog.com

It's a great resource for identifying tokens if you can only make out some of the words, or know where the token saw use but doesn't give much in the way of history for most of them. For that you have to use other resources related to company histories, organisations, or genealogy of the named people.
Upvote 2

Great I.D. Red Coat.
Upvote 2
You must log in or register to reply here.