One silver earring and a new permission with some promise

Went to a little used ball field west of town. It?s not used much any more and I?m not sure when it was put in. I detected here a little several years ago. The scouts were camping by the pavilion for the weekend and doing some hiking so I managed to get in a few hours of detecting between sessions with the scouts. In 2.5 hours the CZ21 managed to sniff out 58 coin with a face value of $2.43, a brass whatzit, an Ertl hay bailer, one wheatie, a game tab, some whole aluminum cans and more tabs. 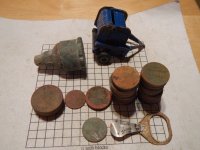 ​
The wheatie is a semi toasted 1935 D. Most of the pennies from this field were copper instead of the pile of zincs which is a nice change. The tab is a Pepsi Cola monopoly game tab. Not sure of the year they did this one. 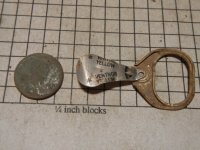 ​
The whatzit has a threaded cap on one end and what looks like an air hose connection on the other. No idea what it is. 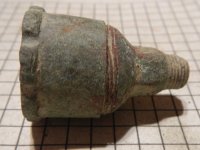 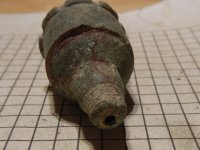 ​
I went back to the park where I searched for the lost diamond ring. I wasn?t planning on finding a lot, but I?m always hopeful. I parked, walked across the road and started detecting. The first signal was a quarter, then 2 quarters in the next hole and it went on like that. In 15 minutes I had 10 quarters. About that time a neighbor came over. I thought he might be there to complain about me detecting the park. Instead he asked if I was having any luck and said I could come and detect his house across the street anytime. He said the entrance to the fireman?s carnival was in his front yard in the 50s and 60s. He also said he found an 1897 V nickel in his front yard. We exchanged information and I am welcome anytime whether he is home or not.

I worked with the CZ21 for 4 hours and managed to find 106 coins with a face value of $10.48, a silver earring, 4 military blank cartridges, a Brinks lock, some large iron pieces, a large clump of copper, some bottle caps, foil and only 3 or 4 tabs. 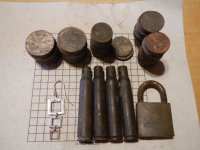 ​
The earring is marked 925 with a makers mark. 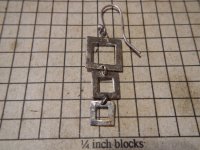 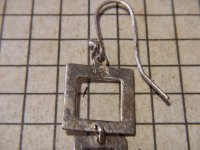 ​
The cartridges are all marked LC so they are from the Lake City Arsenal. 2 of them are marked 01 for 2001 and have a crimped end closure. 2 others are marked 69 for 1969 and have the cardboard plug types closure. I found them near the war monument and flagpoles. They were used for holiday salutes. 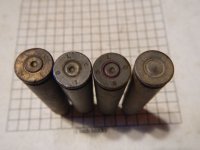 ​
The large clump is copper. It is very irregular and looks a lot like a chunk of native copper. But I don?t think there is any native copper in the area and this park has lots of junky iron and ash in the ground so I think it is more likely that it is just a piece of melted copper. I will add it to the recycle pile. 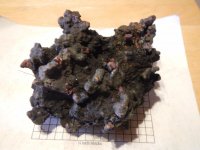 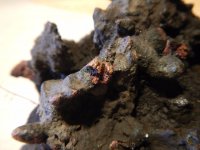 ​
I had one day at the scout camp. I tried a different site and worked a grid like usual digging all mid and high tones with the CZ21 for 6 hours. It started off really slow and after 2.5 hours I was ready to move on when things started to get better. I ended up with 128 coins with a face value of $9.65, 76 large camp tent pegs, a nice pile of sinkers, a good knife, 2 hat pin backs, a fishing spinner, 7 rope tensioners, 2 NO CASH VALUE tokens, a pinewood derby medal, a cob coin copy, an aluminum kids ring, a coat of arms token, a cut in half penny, a Webelos slide, a belt loop knife holder, some small personal tent pegs, same melted aluminum from the fire pits, aluminum foil wrappers and a few tabs. 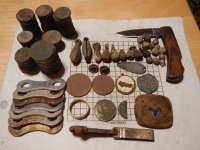 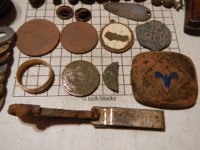 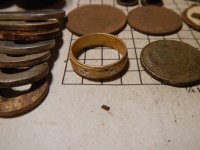 ​
I had a few hours before an appointment so I went to the new permission I got while deleting the park this week. It turns out the house was built in 1890. I spent 3 hours with the CZ21 doing a quick survey hunt of the yard. Unfortunately it looks like a lot of the yard is fill dirt and furnace ash so it may not be as good as I had hoped. I did find 42 coins with a face value of $2.88 ( including 10 wheaties), a soda fountain spoon made by Newark Silver, a Lido lighter made in Japan, an American Waltham watch face (you can only see the writing at an angle), a Studebaker radiator emblem, a blank mine chit, a Vigil padlock, a towel rack end piece, a few tabs, some brass fittings, a Ford key, and some large iron pieces. I?m not having a lot of luck getting info on the lock, the spoon or the lighter. 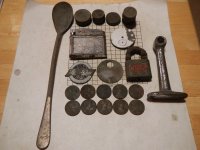 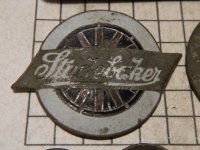 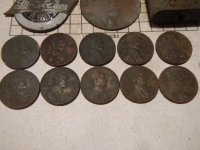 ​
While I was detecting the owner came out on his way to the doctor to see how I was doing. I showed him the stuff. I told him I would save everything and let him see it all and he could have some of the stuff if he wanted. He told me not to bother, I didn?t need to show him anything and I could have it all. He did mention that he had lost a truck key over by the driveway. He had looked and looked and couldn?t find it so he imagined that it fell onto the running board of his truck and fell off when he was driving to work. Later on as I was detecting in that area I found the key. A truck key with a chip in it that cost him a lot to replace. I left him a phone message and put the key on his porch for him to get when he returned later in the day. I?ll try to get back soon and start the grid. Maybe there is still silver here. 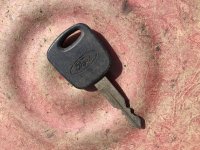 ​
It?s funny how some people view our detecting their property. Most say keep it all you worked hard for it. Some want special things they remember. The guy who owned the rental place l detected recently wanted all of it. His grandmother had owned the house and family members have lived there since the 20s. I would have liked to keep the POLICE button and the Indian, but I let him have it all including the trashy recyclables (because he wanted to go through it all and see if anything was worth keeping). But then he asked how much he owed me for finding the stuff for him. I told him nothing. It was fun to find and the stuff was more important to him than it was to me. He than said he had 2 other properties I could detect and he would see if he could remember some of the older places in town where I might have good luck finding old coins and jewelry. So being nice to the folks paid off again.

Sorry for the extra long post. It has been a busy week. Another clad heavy week with one silver and another pile of interesting stuff. I?ll be off for a few days as we get the house carpeted. We have to keep moving stuff around to stay ahead of the work crew. It?s been really hot here again. I need to get back into the water and cool off. Stay safe, good luck and may your coil lead you to good things.
Upvote 11
S

Sounds like a good spot. Where there's wheaties there's silver. Just a matter of time and effort. Good luck!

Oh yeah TNT I?m seeing a lot of promise I mean a lot. I?ll be Wayton to see what you come up with I want those mid tones I like that V-nick [emoji631]

What a great bunch of finds! I love the little hay baler! I have a similar lighter that belonged to my grandfather that he had in the war. The places he went is scratched into the side. Thanks for sharing!! I can't wait to see what else you find there!

Congrats, you have some really nice finds! And sounds like there will be more to come.

Fun bunch off finds! The brass whatsit is an automatic grease fitting for machinery. Very cool to get those permissions, good luck!

You made a lot of good finds and have a great story! Congratulations on all the goodies and thanks for posting and sharing.
You must log in or register to reply here.

Some 19th century water finds and a much older bucketlister