Poll - How long have you been detecting?

Detector(s) used
A stick with a box at one end and a round thing on the other.

Let's take a poll on:

1: how long you've been detecting.

2: what was your 1st machine you can remember using (doesn't have to be the 1st you bought).

3: Most silver coins in one day of detecting (and if you're as old as I am or older and been detecting as long or longer) you'll remember the days when you could swing a $49.95 detector and find 30 to 40 silver coins at a park/school in one day with no problem, finding most coins at 1 to 2 inches (and do it time and time again)!

I'll start (and I know there's some who are older and been detecting longer, and this is going to reveal some ages here!)

One of Garrett's best for the time (Garrett A.D.S Metal Detector) it was a VLF/TR detector.

Most silver coins in one day = (and I'm working from memory here!) 15+ mercury dimes, 25+ silver roosevelt dimes, 3 st. liberty 1/4s, 7 or 8 silver washingtons, 2 walking lib 1/2s< never forget those!.. Found at one school and a HUGE park that was used since before the civil war..

Soon afterwards (early/mid 80s) these kind of finds in 1 day or even one week or even one month became a thing of the past and, it's only gotten worse since then. Now, you're lucky to find this in one to 2 yrs or more, searching dozens of parks, schools, etc. etc..
Upvote 0
J

My first detector was in 1968. A White's BFO, non-discriminator. Didn't find much with it. In 1972 bought an A.H. Electronics Pro. Gave $3??.?? for it. The first two hours I used it, I found a double hand full of silver coins and three class rings, which more than paid for my detector. I then upgraded to A.H. Super Pro and then to A.H. Super Pro II, then to Garrett ADS III, A.H. Super Pro 5. Took a break from detecting in 1985 except an occasional outing. Went back to seriously detecting in March of this year, 2013, with a Garrett GTAX 500, I now use a Garrett At Pro.
The early years I found thousands of dollars worth of silver coins, jewelry, and watches. Since starting back in March, I have found approximately $450.00 of coins, jewelry, and relics but no-way does it compare to the early years. But I will keep on trying and eventually I may hit an unsearched area that will bring back the good old days.
The A.H. Super Pro II still has the best discrimination and ease of use of any of my detectors, but in today's hunting conditions, it lacks the depth to make good silver finds. I used to find bunches of silver coins at three inches or less, now all the silver I have found was about 4-5 inches deep.
L

There are still sites like that you just have to look I found one and found 60+ silvers and other oldies.

Me,
Since 1994
Whites Goldmaster
Most sliver in one day.... Couple bucks worth.

I'm 69+ years of age
Built detector and coil from electronics magazines in the 60's then a Heathkit
First real detector the White's 6000D Coinmaster:silver coins, gold rings, silver rings, wheaties, few nickels, silver quarter was the one I recall the most!
The Whites was stolen along with the car it was in and the thieves nearly killed us as they left us stranded on a mountain side, it was snowing and we were dripping wet! I still look for that very machine.

XLT, the original Gold Bug and then a GMT. Sold the Gold Bug a few years back. I've never counted the money I've found but I did purchase some accessories for the 6000 D from clad coins I"d found. I've never detected a great deal but I do enjoy it, the 6000 D spoiled me!! 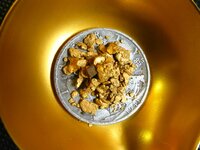 About 3 weeks. Had someone give me a bounty Hunter lone star.
No silver yet but I am hooked.
Only places I have detected is my house and one other place. I am old 50 years old so if I had found this hobby long ago maybe I would have some stories to tell. I am in Texas so there is surely some silver left for me to find.
S

1) Length of time detecting: a year and a half.

2) First detector: When I was a kid in the late 1970s, someone gave me a toy-grade Radio Shack detector that I fooled around with for a few months. I found some a couple of coins in my yard, but eventually my interests turned to sports, girls, etc. Fast forward to early 2012, when my wife got me a BH 3300 for my birthday. I tried hunting some local spots and found enough keepers to get hooked on the hobby. I upgraded this year to an AT Pro.

10 years.. Started off with a bounty hunter landstar.. currently run a AT PRO

I started detecting with my dad in the 80's. I'm now 35 and have gotten bit by the bug again for the last 2 yrs. Going strong now and get out as often as i can which ain't as often as i'd like. Well, only 50 more years to retirement.
J

Over 40 years. My first machine was a whites 4000. Then a 5000 hip mount. 5or6 6000's and now a Minelab explorer. The W6000 pro is probably the best machine. I still find most of my silver 3-4 inches deep. This may be the best year I ever had. The places are out there you just have to hunt. My son and I are over 4000 coins already and we have not been near a beach. I have hunted in Brazil in the past. The minelab is the only machine that has not paid for itself. I am 59 years old and not as fast as I used to be.


2. My parents bought a Jetco Mustang, and I believe that was for my birthday or Christmas in '69. Memory, what memory?!?!?! Think I lost it along with my hair!!

It's been an on-again off-again hobby for the past ~44 years, and I see it now as an enjoyable hobby that provides some well needed exercise. It's always a thrill to see what the next dig brings you, and my wife and I try to imagine some of the stories that lie behind the items I find.

Hope everyone enjoys the hobby as much as I have through the years.

1. Since the late 90's.
2. XLT, it was the latest and greatest.
3. 15 silvers, including a walking lib half, 2 standing lib quarters, (one a key date 1919D) and a bunch of merc's and 2 IH's. Found them in a park that we drove past for years. Found out it was an old railroad station after the fact.
You must log in or register to reply here.

Harder than it looks