https://www.esquiremag.ph/long-read...ide-meteor-impact-crater-a00293-20200429-lfrm
Could this place be worth travelling to to hunt ??
Am new to hunting meteorites and i have no idea where this place is it could be 500 kms away . I only found 5 other impacts dating from 1859- 1956
any info is welcomed ... And yes it could be just another old volcano .

You can easily find Malasiqui on a map. It’s in Pangasinan province, north of Manila: 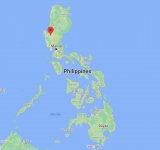 The ‘Malasiqui Ring’ was first suggested as a possible impact crater around 15 years ago I think, having been spotted in Google Earth images. However it was subsequently pointed out that, viewing at ‘ground level’ using the 3D features in Google Earth shows it to be a vast mound with undulating hills, rather than what looks like a depression when viewed ‘overhead’. That makes it really unlikely to be impact-related.

A commentator called ‘Rocel Pereira’, saying he was a remote sensing specialist, broadly agreed with that assessment of the Google Earth images and suggested that the way to confirm the area inside the ring is of higher elevation than the land outside would be by purchasing topographic maps from the National Mapping and Resource Information Agency (NAMRIA).

That proved not to be necessary when another commentator called ‘Alfredo Sarmiento Centeno’ said that his family owns a piece of land in the centre of the ring and confirmed that there is no depression. It’s a mound with undulating hills.

As far as I know, nobody has provided any geological findings to support an impact hypothesis (no shatter cones, planar deformation features in minerals, high pressure mineral polymorphs, impact melt sheets or dikes, pseudotachylytes, or impact breccias). As such, it doesn’t meet any of the criteria for inclusion in the Earth Impact Database.
OP
I

I guess its either click bait or just another philippines scam . Thank u so much for pointing all this out
OP
I

I have a area nearby that has 2 crater lakes they say are volcanic . To me its possible they are impact craters i could be totally wrong . It seems that the 2 craters are between 4 hills and the 2 big volcano (2000 meters) cones are to the West and South . The big lake 90 meters deep . Am wondering if its worth my time to explore this area around the smaller lake . Yes this is tourism spot which mean problems with a metal detector . Any ideas on what to look for to figure out which type of crater this is ? Yes am in the land of the volcano but there no known big meteorites on this island thats impossible .
Last edited: Sep 20, 2021
You must log in or register to reply here.