I welcome your thoughts and am open to being wrong, but I had a nice morning at two Thrift stores that deliver for me about once a year.

I got all four pieces for a total of $6.00+ tax.
The spoon just looked and felt right. Looking at the roses, it has probably lost a few grams from numerous polishings. When I got it home, I could just make out some lumps of former marks right were the bowl meets the handle. And it tested silver. If anyone recognizes the pattern/era let me know.

I have spent some time on researching the cake knife. It weighs in at 114 grams, is 11.5" long, and tests silver.
It is marked with what appears to be an "X" and "RIKEMAN". What is up with the "X"?
I have been able to find a Horton and Rikeman who made silver in Savannah in shop from 1850-56.
The pie knife in the last picture is a Horton and Rikeman and seems very similar in style. Maybe they broke up? Can't find either of them in most major online guides.

Let me know if you think I am on the right track. I love the idea of finding some home grown antebellum silver. 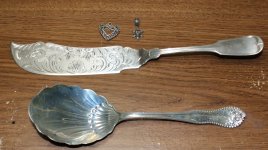 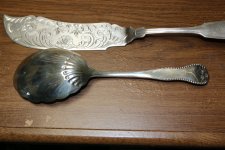 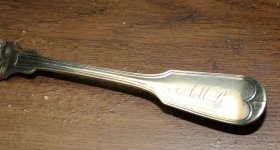 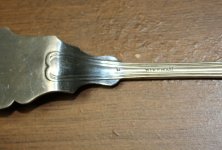 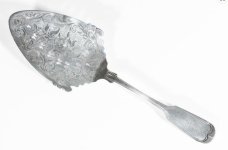 Very nice. Yes, I think you have an antebellum piece by Cornelius H. Rikeman and that it’s a rare mark. It will probably be ‘coin silver’ (.900 fine) but note that this doesn’t mean that coins were melted down to produce it. Silver was also purpose produced to that standard before America began adopting the sterling standard after the war.

Humphrey Phelps Horton was born on 2nd February 1823 in Glastonbury, CT and is recorded as a jeweller in the 1850 Hartford, CT census records. He seems to have moved to Savannah, GA and formed a partnership with Cornelius H. Rikeman later that same year. The partnership was at 116 Broughton Street and lasted until 1856. He then seems to have gone back to Connecticut since he’s listed in the 1859 Hartford city directory at 133 Congress and in the 1860 census as a jeweller (working solo) in Hartford County. He must have returned to Georgia shortly afterwards since he seems to have fought on the Confederate side in the Civil War and is listed on the Savannah City War Roll of Honor. He died just after the war ended on 26th April 1865 from wounds received during the war and is buried in his home-town at the Old Church Cemetery, South Glastonbury.

Cornelius H. Rikeman is not well documented, but he was born in 1810 or 1811. He may have been working as a jeweller/silversmith in Savannah before he formed the partnership with Horton, and/or possibly for a few years after the partnership dissolved. But he was buried in Laurel Grove North Cemetery, Savannah on 17th July 1861 only a few months after the start of the war, so anything with his solo mark must be before that date (and likely pre-war).

Horton’s solo mark is documented (in two styles, one of which is an impressed capitalised mark with the letter ‘X’ preceeding it) as shown below. I don’t know what the ‘X’ denotes. Horton wasn't active as a jeweller during the war, so that mark couldn't be later than 1861 (either pre-1850 or from between 1856 and the start of the war).

So, it seems that that Horton (solo), the partnership with Rikeman, and Rikeman (solo) all used a styling with the letter ‘X’ preceding the name but it can’t be said for sure who was the first user. My guess would be the partnership and that both Horton and Rikeman continued using it after they split. Whichever is the case, your mark would have to be antebellum or first few months of the war at the very, very latest.

The spoon, I don’t know, but I think it’s rather later. I think I can see very worn letters ‘ST’ at the beginning of what’s left of the mark, which might be the beginning of the word ‘STERLING’ and (possibly) a ‘G’ at the end. It’s a thankless task tracking down flatware patterns without a maker mark to go on, but I’m pretty sure it’s one of the variants of Gorham’s Lancaster pattern, first introduced in 1897: 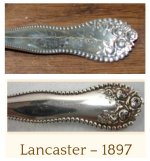 Note that it’s not an exact match, but this is not unusual on popular patterns produced over a number of years. I don’t know how long Gorham used this pattern but I have seen an example engraved with a ‘1910’ date. Subtle variations of design were introduced over time as seen on this later example which has the two rosebuds near the top spaced closer together, as on your spoon: 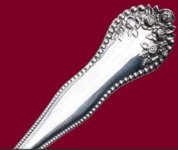 Wow. Thanks Red-Coat--that is all valuable information. I didn't think to look at census records--next time I will remember that. I am glad you confirmed what I was hoping--a very likely antebellum piece from my state, a state not known for silversmithing. And a state that didn't see much silver survive the war.

I had no idea how you were reading anything close to "Sterling" on the spoon until I looked at the photo--the lettering shows up much clearer on the photos than to my loupe-aided eyes.

Thanks for sharing your knowledge and time on this! I don't know how you do it, but your generosity is appreciated.

Wonderful find and beautifully made pieces of antique silver.
You must log in or register to reply here.

Over 16 Troy Ounces of Silver melt put in my pocket today.