sorry only copy I can find is damaged. 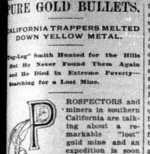 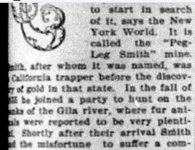 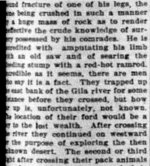 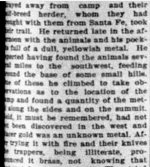 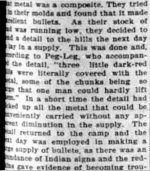 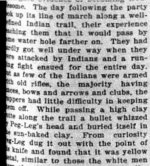 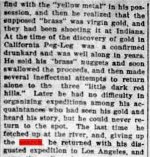 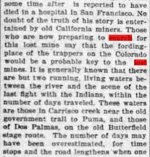 Nice story, but not very factual. Lead melts at around 450 degrees but gold melts around 1900 degrees and it is not really possible to pour gold bullets in back country situations and even in good conditions (having a high temperature forge) it would not pour well in old bullet molds.

Here is a more readable version:

“Peg-Leg” Smith Hunted for the Hills But He Never Found Them Again and He Died In Extreme Poverty — Searching for a Lost Mine.

PROSPECTORS and miners in southern California are talking about a remarkable “lost” gold mine and an expedition is soon to start in search of it, says the New York World. It is called the “Peg-Leg Smith mine.” Smith, after whom it was named, was a California trapper before the discovery of gold in that state. In the fall of 1835 he joined a party to hunt on the banks of the Gila river, where fur animals were reported to be very plentiful. Shortly after their arrival Smith had the misfortune to suffered a compound fracture of one his legs, the same being crushed in such a manner by a huge mass of rock as to render ineffective the crude knowledge of surgery possessed by his comrades. He is credited with amputating his limb with an old saw and of searing the bleeding stump with a red-hot ramrod. Incredible as it seems, there are men who say it is a fact. They trapped up the east bank of the Gila river for some distance before they crossed, but how far up is, unfortunately, not known. The location of their ford would be a key to the lost wealth. After crossing the river they continued on westward for the purpose of exploring the then unknown desert. The second or third night after crossing their pack animals strayed away from camp and their half-breed herder, whom they had brought with them from Santa Fe, took their trail. He returned late in the afternoon with the animals and his pockets full f a dull, yellowish metal. He reported having found the animals several miles to the southwest, feeding around the base of some small hills. One of these he climbed to take observations as to the location of the camp and found a quantity of the metal along the sides and on the summit. Gold, it must be remembered, had not yet been discovered in the west and placer gold was an unknown metal. After trying it with fire and their knives the trappers, being illiterate, pronounced it brass, not knowing that metal was a composite. They tried it in their molds and found that it made excellent bullets. As their stock of lead was running low, they decided to send a detail to the hills the next day and lay in a supply. This was done and, according to Peg-Leg, who accompanied the detail, “three little dark-red hills were literally covered with the metal, some of the chunks so large that one man could hardly lift them.” In a short time the detail had picked up all the metal that could be could be conveniently carried without any apparent diminution in the supply. The detail returned to the camp and the next day was employed in making a large supply of bullets, as there was an abundance of Indian signs and the redskins gave evidence of becoming troublesome. The day following the party took up its line of march along a well-defined Indian trail, their experience teaching them that it would pass by some water hole farther on. They had hardly got well under way when they were attacked by Indians and a running fight ensued for the entire day, but as few of the Indians were armed with old rifles, the majority having lances, bows and arrows and clubs, the trappers had little difficulty in keeping them off. While passing a high clay butte along the trail a bullet whizzed by Peg-Leg’s head and buried itself in the sun-baked clay. From curiosity Peg-Leg dug it out with the point of his knife and found that it was yellow metal, similar to those the white men were shooting. After Marshall’s discovery of gold Peg-Leg compared that find with the “yellow metal” in his possession, and then he realized that the supposed “brass” as virgin gold, and they had been shooting it at Indians. At the time of the discovery of gold in California Peg-Leg was a confirmed drunkard and was well along in years. He sold his “brass” nuggets and soon swallowed the proceeds, and then made several ineffectual attempts to return along to the three “little dark red hills.” Later he had no difficulty in organizing expeditions among his acquaintances who had seen his gold and heard his story, but he could never return to the spot. The last time he fetched up at the river and, giving up the search he returned with his disgusted expedition to Los Angeles, and some time after is reported to have died in a hospital In San Francisco. No doubt of the truth of his story is entertained by old California miners. Those who are now preparing to search for this lost mine say that the fording place of the trappers on the Colorado would be a probable key to the lost mines. It is generally known that there are but two running, living waters between the river and the scene of the last fight with the Indians, within the number of days traveled. These waters are those in Carrisco creek near the old government trail to Puma [sic: Yuma?], and those of Dos Palmas on the old Butterfield stage route. The number of days may have been overestimated, for time stops and the road lengthens when one is compelled to fight Indians day and night. Taking all these things into consideration, a search for this lost wealth entails the perilous hardships of prospecting over 15,000 square miles of hot, dry desert and mountains.

The Old Bookaroo
A

i have no gold bullets but, i have twelve loaded rounds of silver bullet tips in 38spl. a buddy of mine poured a bunch 30yrs ago to give as christmas presents. i have them in a old smith model 10, 38spl in the drawer. ya just never know.

autofull said:
i have no gold bullets but, i have twelve loaded rounds of silver bullet tips in 38spl. a buddy of mine poured a bunch 30yrs ago to give as christmas presents. i have them in a old smith model 10, 38spl in the drawer. ya just never know.
Click to expand...

You should be okay as long as you avoid the moors during the full moon!

Mike
You must log in or register to reply here.