The other day I came across this spoon handle, or at least that's what it looks like... and the design is interesting, and I wondered if anyone had come across anything similar. I only found the end of it, and that part is about 2" long. It's about 5/8" wide and it's extremely thin.. apprx. 0.67 mm.

The handle appears to have pine trees flowing from something. I cannot figure it out. Maybe there isn't any meaning, and it's just a very laborious etching on a spoon handle. I believe it's brass but not positive. Not magnetic at any rate.

Here it is... any ideas or feedback would be appreciated. Along with it I found my first V nickel, 1902, and a beat up but readable Indian head, 1865. 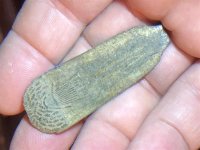 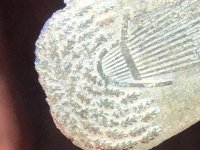 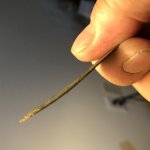 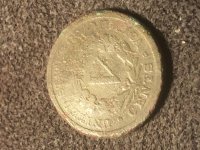 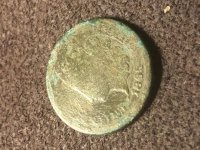 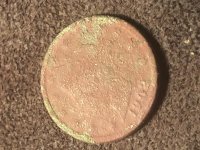 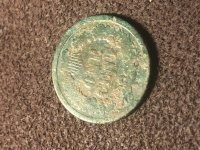 RussM, that is a nice assortment! The piece of eating utensil handle may have been part of a fiddleback design. Not sure about the pattern - looks like the lower half of a tree.
Upvote 0

Nice! Maybe a grain bale of some kind on the handle, like wheat.
Upvote 0

Nice finds! Thanks for sharing!!
Upvote 0
I

After looking at the pattern in Powerpoint, I thought it might be a bundle of wheat sheaves and a sickle - see pic #1. Then Google that and found the same/similar pattern in pic #2. More info found on https://www.smpub.com/ubb/Forum19/HTML/001050.html

I see a stylized, "R." My late aunt left my mother a set of spoons purchased as a tourist. And each state had been making them as she travelled. Could this be for Rhode Island?
Upvote 0
OP
R

invent4hir-- Incredible... you nailed it. Thank you very much!

While the origin and possible meaning for it remain a bit obscure to me, you have certainly found the same image on another spoon handle, given me more to go on, and a basic time frame of it's introduction and reasons for it to show up on silverware.. . very nicely done!

Thanks very much, I am considering this SOLVED as far as I'm concerned... yet it has given me another avenue to maybe find out more about it.

Thanks to everyone here... I appreciate all the input!

Although you've marked this "solved", could we please see the back of the handle? Often the maker's mark runs far enough along the handle that it reaches the fiddleback section. Even if only the tail end is visible that might be helpful.

There has been a lot of discussion on silver forums about who made these spoons (they have subtle differences in the design and don't always have a discernible maker's mark). For sure there wasn't a single maker, but I believe this one might be by Isaac Davis, active in Boston at 32 Cornhill between c.1800-1820. This eBay offering was believed by the seller to be either by Joshua George Davis ('I' was often substituted for 'J' in those times) who was active in Boston between c.1796-1840) or by Isaac Davis, but I can confirm the mark is for the latter: 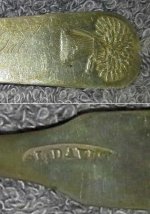 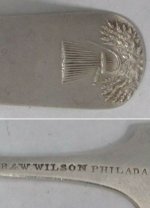 Robert Wilson began making silver at 25 Dey Street (New York City) in 1803, had moved to Philadelphia by 1812 and was joined in partnership by his brother William in 1825 as "R. & W. Wilson". Around 1860, the factory was listed at the northwest corner of Fifth and Cherry Streets. Although Robert had died in 1846, the company name continued to be used until 1877 when the mark changed to "Wm. Wilson & Son". That makes it a slightly later example and note that the design is crisper, with the shoulders on the fiddleback also sharper. That's also the case for the example posted above.
Last edited: Sep 18, 2021
Upvote 0
OP
R

Thanks Red-Coat for all that information as well.. this is pretty fascinating stuff.. I took a pic of the back, but there isn't anything that I can see. I'll post it nonetheless as I appreciate all the awesome input here... 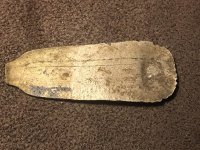 Way to go Red-Coat! Every artifact has a story, if you're willing to dig for it - and that add'l info sure helps

Man I’m glad I checked out this post. I have a thin copper or brass utensil handle with the same design. Found it a couple years ago at an 1830s fort site.
Upvote 0
You must log in or register to reply here.