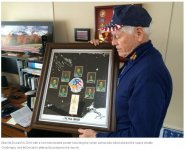 McDonald directed the booster rocket project at NASA contractor Morton Thiokol. He was responsible for the two massive rockets, filled with explosive fuel, which lifted space shuttles skyward. He was at the Kennedy Space Center in Florida for the launch of the Challenger "...to approve or disapprove a launch if something came up," he told me in 2016, 30 years after Challenger exploded.


His job was to sign and submit an official form. Sign the form, he believed, and he'd risk the lives of the seven astronauts set to board the spacecraft the next morning. Refuse to sign, and he'd risk his job, his career, and the good life he'd built for his wife and four children.


"And I made the smartest decision I ever made in my lifetime," McDonald told me. "I refused to sign it. I just thought we were taking risks we shouldn't be taking."


McDonald persistently cited three reasons for a delay: freezing overnight temperatures that could compromise the booster rocket joints; ice forming on the launch pad and spacecraft that could damage the orbiter heat tiles at launch; and forecast rough seas at the booster rocket recovery site.


He also told NASA officials, "If anything happens to this launch, I wouldn't want to be the person that has to stand in front of a board of inquiry to explain why we launched... ."


Now, 35 years after Challenger, McDonald's family reports that he died Saturday in Ogden, Utah, after suffering a fall and brain damage. He was 83 years old.


"There are two ways in which [McDonald's] actions were heroic," recalls Mark Maier, who directs a leadership program at Chapman University and produced a documentary about the Challenger launch decision.


"One was on the night before the launch, refusing to sign off on the launch authorization and continuing to argue against it," Maier says. "And then afterwards in the aftermath, exposing the cover-up that NASA was engaged in."


Twelve days after Challenger exploded, McDonald stood up in a closed hearing of a presidential commission investigating the tragedy. He was "in the cheap seats in the back" when he raised his hand and spoke. He had just heard a NASA official completely gloss over a fundamental fact.


McDonald and his team of Thiokol engineers had strenuously opposed the launch, arguing that freezing overnight temperatures, as low as 18 degrees F, meant that the O-rings at the booster rocket joints would likely stiffen and fail to contain the explosive fuel burning inside the rockets. They presented data showing O-rings had lost elasticity at a much warmer temperature, 53 degrees F, during an earlier launch.


The NASA official simply said that Thiokol had some concerns but approved the launch. He neglected to say that the approval came only after Thiokol executives, under intense pressure from NASA officials, overruled the engineers.


"I was sitting there thinking that's about as deceiving as anything I ever heard," McDonald recalled. "So ... I said I think this presidential commission should know that Morton Thiokol was so concerned, we recommended not launching below 53 degrees Fahrenheit. And we put that in writing and sent that to NASA."


Former Secretary of State William Rogers chaired the commission and stared into the auditorium, squinting in the direction of the voice.


"I'll never forget chairman Rogers said, 'Would you please come down here on the floor and repeat what I think I heard,' " McDonald said.


The focus of the commission's investigation shifted to the booster rocket O-rings, the efforts of McDonald and his colleagues to stop the launch, and the failure of NASA officials to listen.


Morton Thiokol executives were not happy that McDonald spoke up and demoted him.


That alarmed members of the presidential commission and members of Congress. Rep. Edward Markey, a Massachusetts Democrat, introduced a joint resolution in the House that threatened to forbid Thiokol from getting future NASA contracts given the company's punishment of McDonald and any other Thiokol engineers who spoke freely.


The company relented, McDonald was promoted to vice president, and put in charge of the effort to redesign the booster rocket joints that failed during the Challenger launch.


In 1988, the redesigned joints worked successfully as shuttle flights resumed.


McDonald continued to work at Thiokol until 2001 and retired after 42 years. He later co-authored one of the most definitive accounts of the Challenger disaster: Truth, Lies, and O-Rings — Inside the Space Shuttle Challenger Disaster (2009. University Press of Florida). 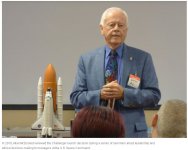 In retirement, McDonald became a fierce advocate of ethical decision-making and spoke to hundreds of engineering students, engineers and managers. He and Chapman University's Maier held leadership and ethics seminars for corporations and government agencies, including the U.S. Space Command.


Maier says that one of McDonald's key moments in his talks helps explain his ability to reconcile his brush with history.


"What we should remember about Al McDonald [is] he would often stress his laws of the seven R's," Maier says. "It was always, always do the right thing for the right reason at the right time with the right people. [And] you will have no regrets for the rest of your life."


"It's really that simple if you just keep it focused that way," McDonald told me in 2016.


He seemed inconsolable immediately after the Challenger explosion in tearful calls home. He recalls the painful conversations in his book. "I feel like it's my fault," he told his daughter Lisa, a nursing student in Boston at the time. "Don't blame yourself, Dad," she said, also crying.


Maier believes McDonald lived out his life with neither blame nor regret. "He died with serenity and equanimity," he says. "I will miss him dearly"


Allan McDonald leaves behind his wife Linda and four children, and a legacy of doing the right things at the right times with the right people.

Beautiful example of how science gets muddied by politics making liars out of scientists. R.I.P. Mr. McDonald.

The night before the launch freezing temperatures occurred at the launch site..The large orings near the engine manufacturer and the space center just before the launch had a telephone call,The manufacturer recommended due to low temps to delay the launch.McDonald went to mgmt.to say the flight should be canceled,,But because of previous delays and added costs they decided not to listen to him and they launched
You must log in or register to reply here.

This is a little "off" - but it concerns chickens!

Please. Need help. Trying to find crystals with my family in Mexico