Greetings Everyone,
I am currently working on a book that involves two particular explorers, with the most famous being Thomas Cavendish. The goal is to find any records of where and when his ships were built. In 1586 he had a fleet of 3 ships;

I am hoping to find information as to where and when all three of these ships were built, unfortunately the Gallant and Content were both lost at sea. My main interest is in the Content if possible..

The second one is a fleet of three ships that were built in Acapulco in the early 1600's for Nicolas de Cardona, one report states that they may have been caravels, yet Dr. Mathes, noted Pacific coast historian, states that they were frigates. Originally Cardona had ships built in Seville, but for some reason he left them, or sold them while in the Caribbean. Cardona along with his crew traveled overland to Acapulco where he had three other ships built, the San Diego, San Francisco and the San Antonio. These ships set sailed in August of 1611, so I assume the ships were constructed in early 1610??

I'm only trying to confirm that these ships were real and what type of ships they were. And lastly, what exactly was a 17th century Spanish frigate (fragta). I have come across the term a couple of times and it seems that it was used to describe virtually any type of ship. But I'm hoping to find an accurate account as to what they truly were.

I'm hoping someone might have the answer, or maybe knows someone else who might or even a place/organization that might hold the answer... Thx for any and all help anyone could provide...

Detector(s) used
A sharp eye, an AquaPulse and a finely tuned shrimp fork.

I found mention of navigator John Davis sailing with Cavendish and his ship being lost from the fleet in "Maritime Exploration in the Age of Discovery 1415-1800' by Ronald S Love, 2006, Greenwood Press. No mention of the name of the ship. When I find time, I will look for other references to Davis.

"To that end, he sailed with an expedition underThomas Cavendish, which planned to circumnavigate the globe. But
the small fleet was unable to negotiate the Strait of Magellan. Davis’s
ship then became separated from the others in a storm, lost its sails,


and drifted in the south Atlantic to the Falkland Islands. He man-
aged to return to England in 1593 and spent the rest of his nautical


career leading commercial voyages to the Far East, where he died in
battle against Japanese pirates near Singapore in 1605."
Last edited: Aug 1, 2017
OP

Davis sailed with Cavendish on his second and final voyage.. I am hoping to find info in Cavendish's own hand about his first voyage in 1587/88, particularly around November 1587 when he attacked the Santa Ana... THX in advance for any and all help you can find Ropefish!!!

Detector(s) used
A sharp eye, an AquaPulse and a finely tuned shrimp fork.

Here are a couple of other references I have found:
From :
We find this: https://www.amazon.com/gp/search?index=books&linkCode=qs&keywords=9781573060479

From a preview of this book:https://www.amazon.com/gp/search?index=books&linkCode=qs&keywords=9781573060479
I found this snippet...might be worth following up on: 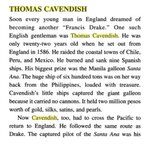 Is exactly what I'm looking for... Only I'm looking for his account of his first voyage, not the second.. I do TRULY appreciate the help my friend!!!

Is exactly what I'm looking for... Only I'm looking for his account of his first voyage, not the second.. I do TRULY appreciate the help my friend!!!

Pegleglooker. Are you still here. I have info on the Content.

bobinsd said:
Pegleglooker. Are you still here. I have info on the Content.

Unfortunately, I just came across a post that said he passed away around the beginning of this year. RIP PLL
You must log in or register to reply here.