I went back to the scout camp for my weekly detecting trip. When I called the ranger he told me they had permanently removed some of the staff tent frames in one of the camps 3 areas. These frames are sturdy and have remained in place for at least 30 or more years so I was hoping there might be some good hunting.

I spent 6 hours with the CZ21 and only covered the area occupied by 4 of the 9 frames they removed. I found 322 coins with a face value of $17.81 (186 pennies), 66 camp tent pegs, a screw driver, an adjustable leather punch, 3 knives and a fork from the dining hall, a squeeze change purse, a necklace with a LOVE pendant, a clevis pin, 4 rope tensioners, a laser pointer, a Webelos neckerchief slide, a nice silver chain and a bunch of tabs. The targets were thick under some of the frames. I would have stayed longer, but I had my granddaughter?s volleyball game to go to. 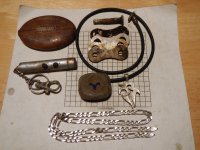 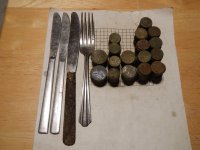 ​
The coin purse is not as old as most of the ones that you see posted here, but it?s the only one I have found and at least it had a nickel in it. If you look closely you can see that it has the University of Minnesota football schedule for 1974 on the back. The nickel is from 1977 and the camp didn?t open until 1980 so someone used it for a while before it was lost. 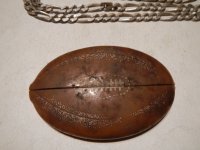 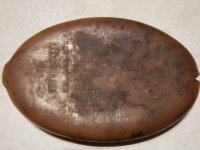 ​
The silver chain was a real shock. That?s 2 hunts in a row at the scout camp where I have found silver and that is a very rare occurrence. It is a nice heavy Italian silver chain. When I found it it had a rusty paper clip replacing the clasp that is missing. Obviously it did not do its job and it disintegrated when I touched it so it has been there for a while. It was just under the leaves on top of the ground, no digging required. 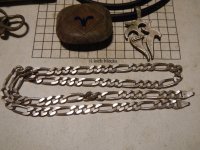 ​
I had such good luck I decided to go back again the next day. I called and got the ok to come (I call before each trip to get the ranger?s ok before I go). I worked the rest of the tent frame sites for 6.5 hours with the CZ21 and finished the last 5. I found an additional 304 coins with a face value of $17.96 (196 pennies), 27 camp tent pegs, a small digital watch with an elastic wristband, a flashlight, a knife holder for a scout belt, a stainless knife, 2 keys, a live .22 round, 2 rope tensioners, a dissecting tool, 2 scout hat pins, a cooking belt loop, a large chunk of melted aluminum and a few tabs. At the bottom of the picture with the coins you can see 12 NO CASH VALUE tokens from the FUN FEST ENTERTAINMENT CENTER in Pittsburgh, PA. Those were all found in about an 18 inch square area beside one of the frame sites. Probably a spill. 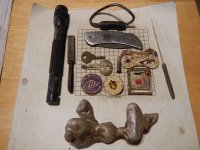 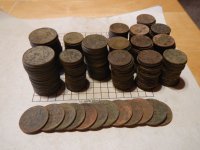 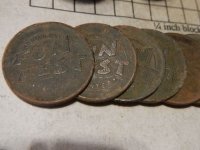 ​
So 2 good days harvesting clad at the scout camp with a nice silver surprise and a few scout items. 12.5 hours of detecting brought 93 pegs and 626 coins. Unfortunately there was a very high percentage of pennies this trip (382). The fresh air was nice, but my back and knees got a real workout. Thanks for looking, stay safe, good luck and may your coil lead you to good things.
Upvote 11

Congrats on all the finds! My knees hurt just reading about it!
C

Man,that little coin purse brings back a lot of memories.When i was a kid every little old lady had one of those she carried her change in,sometimes a bill or two folded up in there.Banks,stores,football teams,gave those away free.Thanks.Great hunt there for you.
L

Wow great hunt! Makes my back hurt thinking of that many holes! Congrats!!

such productive hunts, love the silver and scout stuff

That's a lot of digging! Congrats on the silver chain, a very nice bonus.
You must log in or register to reply here.

Another Bucket lister this afternoon