Found 15 inches down with my metal detector. in Silverton Or took it to a local rock shop said looks like silver ore. Thoughts? 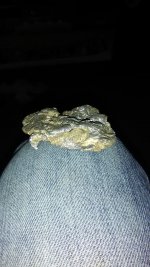 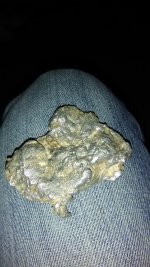 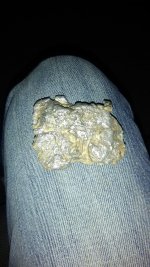 To my eye it doesn't look like a natural formation. Are you sure is not just some metal that was heated and melted and maybe even partly aluminum? A previous post by you in another thread puts the total weight at about 49 grams which is about 2 ounces
Last edited: Mar 28, 2019
OP
D 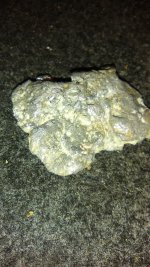 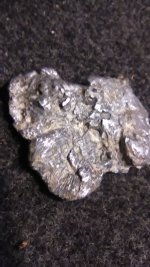 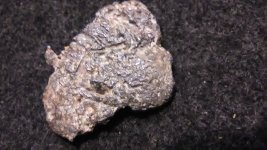 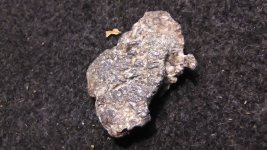 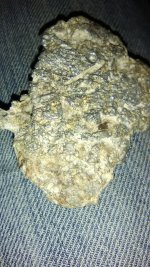 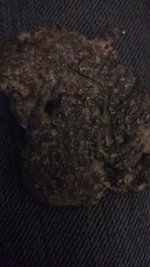 It actually looks like a rock thats silver for the most part. some yellow in it, but does not look like anything that was melted down.
OP
D

Aluminum wont hit on a metal detector this hits at 123 121 125 everytime. in the silver reading.

Interesting find. If you get a chance, have it tested and let us know what it is.

All the best, and thanks for the pictures,

I wish that was true.

drakerick65 said:
Aluminum wont hit on a metal detector this hits at 123 121 125 everytime. in the silver reading.
Click to expand...

Sorry boss but billions of pull tabs and cans found...half by me alone

ok i read thats true, hits like a pull tab, this hits on silver everytime.

Metal detectors CANNOT tell what kind of metal one has. Metal detectors only measure the electrical conductivity of the object and some can measure a ferrous value. Large aluminum, iron, steel, brass, copper, items will all make a detector say "silver" by giving high TID or tones since large pieces of most metals will conduct electricity well. I too think the item drakerick found is melted aluminum, it is a common find. Silver does not really occur in nature in large nuggets or even small nuggets as gold does. Drake, put your detector up to a soda or beer can, it will blow your ears out and read high just like silver.

Regardless of how it "hits" on the meter, I'd still love to know what it really is after you get an analysis done, and for you, I hope it's great news and it turns out to be silver. That would really be a cool find.

sorry, i wouldnt have opened my mouth if i knew you were going to get beat up. take it to a lapidary, they will know better than anyone. looks like the real mccoy to me

Hi Everyone… very little information is provided about the questionable sample above. Photos unfortunately don’t give us viewers any idea about the weightiness of the sample. This factor alone would clearly help us to eliminate melted aluminum from consideration. Aluminum is as light as a feather so to speak. Nor does a photo permit us to do a quick streak test on a bit of unglazed porcelain from around the house such as the unfinished bottom of beige / white coffee cups or soup bowls. This test would eliminate all brittle white / silvery sulfides from contention, because these sulfides do not produce a metallic silvery streak, but rather they produce darker non-metallic streaks.

The sample above does not look natural to me, but even silver that has been melted will look unnatural. So our first question is if the silvery material is embedded in a rock matrix. If so, that too would certainly eliminate melted aluminum from contention.

What is responsible for producing the widespread creamy / slightly yellowish discoloration on the sample? Does it result from using artificial lighting for the photos? If we had the sample in our hands, we would immediately know the answer to that question. It looks similar to commonplace lead oxide, the same stuff we see on lead bullets that have been in the ground for decades. That could indicate possible galena smelting / lead melting at some time in the past.

A simple specific gravity determination in conjunction with a streak test on your sample would go a long way towards identifying it. But I think it would be a better idea to simply have a quick XRF or some other type of analysis completed to be sure.

Gunsil’s comments above are correct. Most silver does not occur in the form of nuggets or native silver embedded in rock specimens. In actual fact, most of it is smelted primarily from sources of acanthite and to a lesser extent from other non-native silver ores. Acanthite is a brittle, dark silver sulfide (Ag2S) with 87% silver composition. It is not field detectable unless it contains detectable native silver, obviously we recover acanthite incidental to digging native silver signals.

Galena, a brittle lead sulfide ore that produces a very dark streak test result, is a primary source of silver because it often contains a considerable amount of acanthite as an impurity. Acanthite does not influence galena to be more easily detectable, in fact if the acanthite concentrations were typically much higher than we normally see, the opposite would be true. Galena, depending on its structure and configuration, is normally easily detectable with a prospecting-capable / sensitive VLF detector. It does not react to either of my ground-balancing PI detectors, even utilizing the most sensitive settings and small mono coils, and with the ground balance feature turned OFF for use in a sensitive bench test.

Native silver occurrences in North America are well-documented in mineralogical and applicable mining literature. In the silverfields of northeastern Ontario it occurs in the form of hardrock veins, and as hardrock and nugget float material similar to the examples depicted below. There are a number of documented (photographed) examples of our silver float found exposed on the surface at the turn of the previous century that weighed several hundreds of pounds. Modern day electronic prospectors have found countless fine examples of native silver float over the past 40 years or so…………………….Jim. 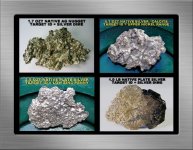 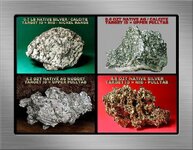 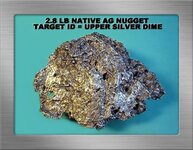 If it is a natural silver nugget, which I doubt, it is not native to the area of Silverton, Oregon, as there are no known formations that could produce such a nugget.

galenrog said:
If it is a natural silver nugget, which I doubt, it is not native to the area of Silverton, Oregon, as there are no known formations that could produce such a nugget.

well that might be a good thing to know....i assumed because of the name silverton that.... oh well i know how that saying goes.
G

Silverton, Oregon was originally called Milford, then Silver Creek, and in 1855 became Silverton. Silver Creek, which runs through Silverton, has several name origin stories, none of which involved silver mining. One story includes the loss of silver, however.

Maybe he'll start a third thread on this "nugget."
You must log in or register to reply here.

Newbie question on finding nuggets in creeks and rivers