Some Hunts Over the Last Couple of Weeks - Old Silver

Howdy Yall, the last couple of weeks I've gotten out a few times. The weather here this spring has been a little crazy. If it wasn't snowing it was raining. When the sun peeked out, I took advantage of it. I made my way back to the spoon woods on two different occasions for few hours. Finding spoons and digging trash was the norm when I got a solid 82. To my surprise, it was a Mercury Dime. The next good tone was an 83-84. It was about 8 inches down. When I got it out of the hole I knew what it was, another watch fob. It's my sixth one that I've found in two years. I also found another wheat cent. When I got back to the woods the second time I got a nice tone and dug it. At first, I thought it was a dog tag. I was right about it being a tag, just the wrong animal. Pulled a token out of the ground also. 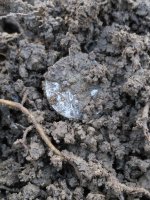 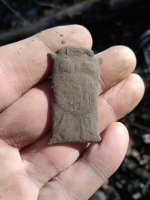 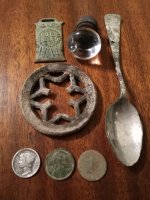 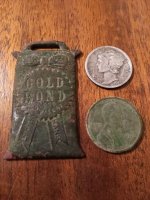 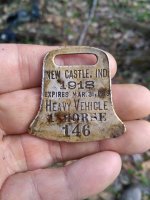 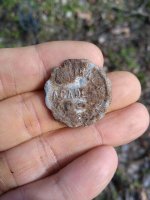 Last Sunday I made my way back to the 1800's field for about an hour. Even tho it was a short hunt it turned out to be one of my better hunts there. The first tone was a bouncy one. It was bouncing all around, 50 to 70 to 60. Seemed odd. When I popped the plug out of the ground, it was in the plug and coming in as a solid 81. I knew it was a dime. To my surprise, my second seated dime. Both were found in the same field. I made a couple more passes up and down the field. I came across a part of the field that was washed out a little bit. Snow and water running off the field. In this area, I got a solid 81. Six to eight inches down and I was guessing Barber Dime. I got it out of the plug and surprised again. Another seated Dime. This one was 1877, the same year as the first one I found here almost a year ago. 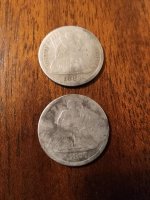 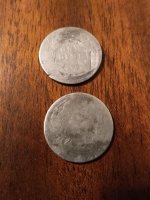 Monday afternoon we got off work a little early because the Site Manager had to leave. When I got home I grabbed my things and headed out to the field where I found the LC. This field has a lot of iron and I was going thru it very slow. The first decent sound was coming in around 67, only two inches down. I stuck the tip of the shovel under it and popped an IHC. I was working the grid back and forth. I was getting good sounds in the low 80's, all over the place that were pieces of brass. I got another that was ringing up at a solid 84. When I got it out of the plug I knew it was a ring. I was also very dark. I saw it was shining on parts of it. Cleaned it up a little and tried to see markings on the inside. There are no markings. I think it's silver and old silver at that. Every coin I've found here is in the 19th century. I kept at it for a little bit longer finding a flat button, the back of a two-piece button and an old padlock with a pat date 1895. I've kept you long enough. Thanks for looking. Best of luck on your hunts. SD 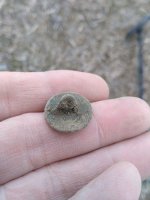 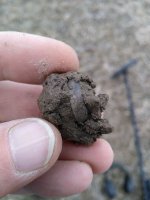 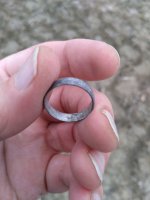 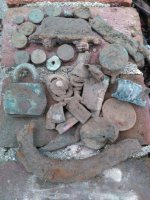 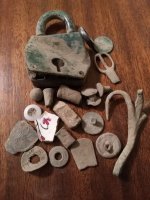 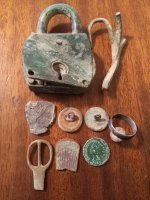 Great hunt there, you got to love the old seated. HH
I

The token is from Terre Haute. There are a couple of varieties shown on tokencatalog.
https://www.tokencatalog.com/displa...Word=&ImagedOnlyOption=&action=DisplayRecords

wingmaster said:
Great hunt there, you got to love the old seated. HH
Click to expand...

Thanks wingmaster... I love the seated. Those two are very worn.

idahotokens said:
The token is from Terre Haute. There are a couple of varieties shown on tokencatalog.
https://www.tokencatalog.com/displa...Word=&ImagedOnlyOption=&action=DisplayRecords

Thanks idahotokens for ID'ing the token for me.

Some great digs there Dave!!!! Seats are always a welcomed find but I really luv the fob and tag!! Those WILL stand out in the display case for sure!!!!!! Keep the hoosier finds a comin bud...... CONGRATZ.......
OP

Thanks Mark, hows that AT Max working out for you?

fishstick said:
Some great digs there Dave!!!! Seats are always a welcomed find but I really luv the fob and tag!! Those WILL stand out in the display case for sure!!!!!! Keep the hoosier finds a comin bud...... CONGRATZ.......
Click to expand...

Thanks fishstick, one of these days when I find a fob it's going to be silver. The day I dug the tag, it was almost a hundred years old to the day.
You must log in or register to reply here.