✅ SOLVED Something else I cannot ID

I found this today on a farm field where a Civil War battle took place. It is made of cast brass, tapers at the end and has the square "tab" on the other end. Diameter is about 3/4" at thickest part. Ideas? 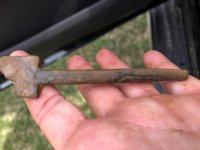 It just has a blunt end, does not appear to be broken on the round part. There is no curvature to it. Of course it could be 20 years old too, but unlikely with that patina.
Sort by date Sort by votes

Are you sure it is brass? It looks like a broken top clevis pin.
Upvote 0
OP

Yes, but I haven't cleaned it yet.
Upvote 0

Is it a gun tamper-part you push the ball and powder pushed I to old guns?
Upvote 0 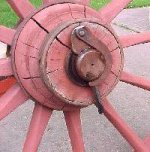 Not real sure what we are looking at in that photo, but whatever it is, it would be iron and not brass.
Upvote 0
I

GoldieLocks said:
Is it a gun tamper-part you push the ball and powder pushed I to old guns?
Click to expand...

I cannot BELIEVE that someone else actually thought it was the same thing I thought it was! Brass would make sense, wouldn’t damage the barrel. A clevis pin obviously wouldn’t be made of brass, if it indeed is...but we know this...I too thought it was a pistol ram rod! Good one Goldie!
Upvote 0
OP

It is way too big for a ramrod. It is in the truck. I will take a magnet to it but it rang up as big brass. HAPPY EASTER! I originally thought of clevis pin but...
Upvote 0
R

My first thought was a tool for cleaning the touch hole on a cannon.
Upvote 0
A

Not sure I agree that's what the items is, but I always thought brass was used around firearms because it would not create a spark (and thus set off any gunpowder).
Not necessarily the softness of the brass compared to other metals.

I like AARC's wheel pin ID, if the material matches.
Upvote 0
OP

Ok, I have some more accurate information. It is 4" long. There is evidence the square tab has been snapped off. So it is also made of cast brass! At least I got that right. The diameter on the small end is 1/4" It expands to 1/3" right below the square tab. It was hand formed after casting.

It would never have been strong enough to hold a wheel on anything. What about the part of a guidon that went into the wood handle of a pole? More research is needed.
Upvote 0

Reversed from what the mind wants to use it as , a file handle or similar could go on the pointed end.
Making it a broken scraper. A scraper for what though?

ARRC has got the shape and size in his picture.
The history of Macon Georgia had citizens donating brass for a works there.
Pistol frames were made of brass not out of it being choice material. But available material.
Not saying his pic. is what it is. But brass was substituted for iron or steel where it could , or had to be sometimes , by the Confederacy.
I'm no good student , but have not noted complaints of failure in substitutions. But when folks were dying and more material was needed , complaining about material and construction were likely not big topics. They made do best they could. And often succeeded at substitution..
Upvote 0
OP

It is very possibly Confederate manufacture. If the 4" length is not an issue, it could be one of the pins for a smaller size wagon wheel. The Confederates would have had better luck smelting brass than iron due to the temps required.
Upvote 0
OP

Any final ideas? I researched cannon vent picks, this is way too big. Confederate brass substitute for a wheel pin is the leading contender right now.
Upvote 0

If it was steel I'd say it was some kind of alignment pin. Being brass (bronze, maybe?) rules that out. But opens up the anti-corrosive possibilities. Especially as you are in Maryland.

As a WAG, perhaps something once used as a rudder pintle? Size is good for a smaller (under 20 ft) boat. Or some other pin for boat use? 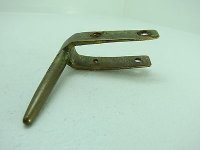 Possible. This piece was found in the mountains of Virginia.
Upvote 0

The tapered end went up the shaft of the wood implement. What the use was or what the broken end was fir- I got nothing.
Upvote 0
OP

Shaft is kind of big to put in wood. A slight bend to it also.
Upvote 0

I would like to help you out Smokey... but, I have no idea!!!
Upvote 0
You must log in or register to reply here.

What kind of horn

Help this is one of many things I have found lately