State park gives up some silver and detecting etiquette

I got to the park early and waited for the gates to open. I got geared up and headed for the water. A guy who shows up every year was there as well. I detect shallow to deep starting on the left side going toward the right. He usually starts deep and goes back and forth working toward the shore. We have done this for about 5 years. Well this year he did my pattern and started about 12 feet to my right and worked ahead of me for the whole swim area. When he had a problem and stopped to make the fix of his detector I told him that I thought what he was doing was rude and he should have started at the other end and worked toward the middle. He replied that when he detects on virgina beaches with lots of other detectorist they go all over the place and it doesn?t matter. Well on a huge ocean beach with lots of space it may not matter, but in a small well defined swimming area it matters. I probably should have gone to the other end and started back toward him from the other end, but I felt like I would be doing almost the same thing he did and I didn?t want to sink to his level.

He moved on to the second swim area of the park while I was finishing the first and a third guy showed up. He introduced himself and said ?Where do you want me to start?? I replied anywhere you like (I was mostly done and the other guy had finished so it didn?t matter.) Later on when the first guy had left guy 3 and I worked the second swim area. Without saying anything I started at one end and he started at the other. I did mostly water and he did mostly beach and we respected each other?s space. It turns out he has only been detecting for about 6 months, but he is a courteous person and the first guy is a jerk. The only good thing is the jerk is not very thorough and I am so I managed to find some coins and silver jewelry he missed. He did get 3 rings, and a few coins, but nothing good.

I spent 5 hours with the ATPro searching for goodies, mostly in the water, but about an hour on the beach with about half the coins in each area. The bottom in this area is gravel and rocks and there is only a thin layer before you get to hard rock and clay that is pretty impenetrable and there are some rocks that stick up so recovering items can be a chore. I managed to find 21 coins with a face value of $2.14, 3 sinkers, a fishing lure, 2 tabs, a bead, 5 cheapie earrings, a shoe grommet, a belly button ring, a cord necklace with 3 ring pendant, a ring a silver earring, and a few bits of foil. Targets were few for all 3 of us. 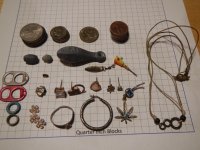 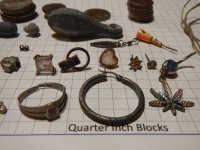 ​
The ring is an odd one with an unusual blob on the top and a split ring so it can be adjusted. It doesn?t have any marks on the inside, but is stamped on the front with DH-100. I?ve never this mark on jewelry before and can?t seem to find anything about it on line. I know that in Egypt and other Arabic countries they often place the quality mark on the front for all to see. The earring is a nice etched silver hoop made in Thailand. 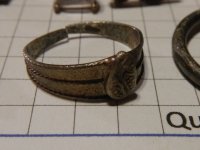 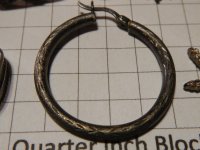 ​
So more silver for 7 hunts in a row with 4 gold. A good start for this week and the state park clean up. Thanks for looking, stay safe, good luck, and may your coil lead you to good things.
Upvote 15

Yes he was rude. I need distance from other hunters and if that means I need to change my location I would so I would have gone as far right as possible and worked my way towards him. But the biggest thing is to not let an irritating hunter cause you to lose concentration - tune them out as best you can and focus on what you are hearing,

Competition! I'm lucky. I've never seen anyone detecting around here and I've lived here for 28 yrs. I think the reason is because there is very little to find in my corner of the world. Gary

Sounds like the same guy that pulled the same move on me at Tahoe about 5 weeks ago! What an ass.
Anyway, you found some interesting stuff, congrats!

That's when I would have said, "oh really, we can detect anywhere we want? Ok, we'll play by your rules today" I'd then go get the PI machine and hunt right up next to him and blow his ears off! I've had to do that to a few local knuckleheads until they get the message that being an A-hole doesn't pay off.

In my opinion jerks like that are often impatient people, and impatience at metal detecting translates to tons of missed targets. This is the kind of asshat who thinks "covering everything" is more important that swinging the coil correctly and being more thorough and consistent in a search pattern.

Glad the other guy was cool, though. You did the right thing and were rewarded.

May have been frustrating, but you still brought in some goodies. That pot leaf earring looks vaguely familiar.

Congrats, nice finds!
You must log in or register to reply here.

Got another hour in not bad