I haven't had a chance to post much lately because of having to get remodeling projects completed. Back in June, I had a new permission for an older home that had been demolished. (I had worked across the street and those customers told me the new owner's name.)
The long and short is that the new owners were very interested to see what history I might come across and granted me permission to dig.

I started around the perimeter since I felt there would be lots of debris under the footprint of the home's concrete foundation.
Lots of the usual copper pipes, fittings, some melted lead, and a ring with two wings flanking the top of an anchor.

I couldn't find any maker's mark but it did have the size (6) and "STERLING" on the inside and weighed 6 grams. One interesting feature I noticed while taking images was a "square dimples" effect on the face surrounding the main feature. A size 6 seems on the smaller size, like it may have belonged to the better half of someone in the naval aviators branch. (I'm not sure if females would have been naval aviators in WWII.)

I gave it two soaks in hydrogen peroxide to remove some of the dirt and dust and it brought out some of the details a little better.

I offered it to the owner as a thank you and he was very grateful. Since he's a real estate agent I'm hoping it might lead to possibly some more permissions. (Apologies go to my digging buddy SPhillips who I was going to give it to for his son. )

This area of Florida is home to the WWII training camp for soldiers going to the beaches of Europe and the Pacific. The Navy Seal museum is located in the next town over so there is a lot of potential history behind this ring. (The local airport was taken over by the military for training as well in 1942, I believe.)
Enjoy and thanks for looking.

Oh yeah, the oval copper piece is about a foot long and seems to have been an insert for a planter or pot. 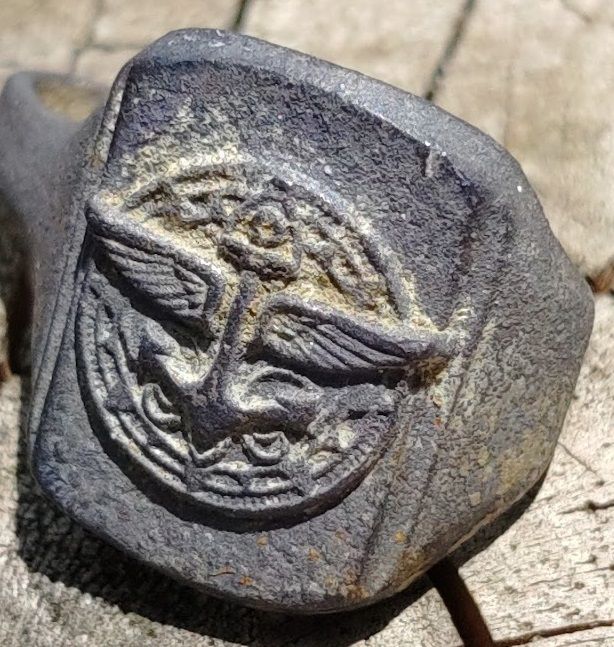 Bump (in case I posted this in the wrong forum and others would like to see this design.)
You must log in or register to reply here.