TEDDY ROOSEVELT WAS A MEMBER OF THE ORDER OF AMERICAN KNIGHTS

"Originally started by the French, the Panama Canal was intended to drastically shorten the travel time of ships going between the Pacific and the Atlantic. The French project turned out to be a disaster, and they were eager to hand the project off. So when Theodore Roosevelt offered to buy it, they were more than willing. However, the United States Congress was less eager to spend the money. In order to speed things up, Roosevelt helped organize a revolution that overthrew the government of Panama and replaced it with a nation whose constitution had been written by Americans and whose flag had been designed by the wife of a pro-intervention congressmen."

Imperialism of the Panama Canal? Building the Panama Canal took from 1903 until 1914 a total of eleven years. To support the revolution there, Roosevelt sent some American warships to the area as a show of force knowing the ones revolting wanted the canal completed. The victorious Panamanians gave the United States control of the Panama Canal Zone on February 23, 1904, for $10 million establishing permanent U.S. rights to a Panama Canal Zone that stretched across the isthmus. The agreement for the 10 million had been made on November 18, 1903. With the support of the U.S. government, Panama issued a declaration of independence from Colombia. The revolution was engineered by a Panamanian faction backed by the Panama Canal Company, a French-U.S. corporation. They bought the Panama Railroad Company in 1881 and sold it to the United States in 1904. 1904 who imedietly rebuilt it on higher ground and with a heavier gage line. Two hundred train loads of dirt removed every day from the work sites. The railroad also transported materials and labor in addition to the trains servjng as sleeping quarters for workers.
Last edited: Mar 2, 2019
OP

L.C. BAKER said:
He was most likely initiated when he was the head of the Civil service for Grover Cleveland. It was during that time that he came to Arbor Lodge with Julius Sterling Morton and met his future Sec. of the Navy.....Paul Morton. Teddy is standing between Paul Morton and Joy Morton in this picture from 1905 View attachment 1396284
Click to expand...

He was most likely initiated when he was the head of the Civil service for Grover Cleveland. It was during that time that he came to Arbor Lodge with Julius Sterling Morton and met his future Sec. of the Navy.....Paul Morton. I was mistaken, Teddy was not standing next to Paul Morton who he had just appointed to Secretary of the Navy with absolutely no military experience what so ever.

Maybe Teddy had the same kind of investment Hillary did during Bill's first term. She took 1k and turned it into 100k in 30 days. I thought at the time the U.S. Gvt. should give her a couple 100 mill and take care of the national debt. Maybe Teddy just did it w/ bigger bucks.

L.C. BAKER said:
I was mistaken, that is not Teddy Roosevelt at Arbor Lodge on that occasion. Thanks for finding out who was there that day Ol Kentuck! 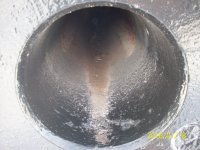 Escape tunnel, or another rabbit hole?

Does that lead to the yellow brick road and onto the lost highway?
R

That leads the way gentlemen.

Although I make assumptions here and there about what I think I may know along the way, I am right from time to time also!

I have been there and found what I was supposed to find. What makes that amazing is that the location had been located in 1976 but they did not find what they were sent there to find at that time! It was not gold, but it is what leads you to it. I will show it all to you after the recovery is complete. There are several sites that have not been finished in this sort of fashion. They ended up there but did not recover what they were sent for because they had the wrong idea about who left what they were searching for. My Father is the only one of the original four that has lived long enough to learn about it and see it for himself.

"Theodore Roosevelt and he had a very close relationship as cousins. Emlen was not interested in politics other than to support his cousin's bids for public office, and Theodore, busy with conservation advocacy, had little time to attend to financial matters. Thus, "Cousin Emlen" was Theodore's financial adviser before, during and after his presidency"

The naked truth. Has to do with a fur company on the "Gulf Coast." It takes several generations to fully develop, but the result is evident. The take over started before the Civil War.

L.C. BAKER said:
Teddy Roosevelt knew about them because he was a member! How else would he have known about the secret societies of the K.G.C. and the O.A.K. 's symbolism? Think about it.

?Behind the ostensible government sits enthroned an invisible government owing no allegiance and acknowledging no responsibility to the people. To destroy this invisible government, to befoul the unholy alliance between corrupt business and corrupt politics is the first task of the statesmanship of the day.?? Theodore Roosevelt, 26th President of the United States.

A picture is sometimes worth MORE than a thousand words. L.C.

Still waiting on a rebuttal.

Teddy Roosevelt was not a member of the Order of American Knights as stated the title of the thread, but he was Illuminated by another secret society made up of wealthy monopolists who created a syndicate of themselves and bought the control of the U.S. Government. Those monopolists included members from the K.G.C., the O.A.K., the I.O.O.F., and the Freemasons. If he was not Illuminated by them, then he would not have known how to use the symbol of the X to represent standing in the dark.....with no ILLUMINATION! In laymen's terms written below the X, he drew the explanation of the large symbol that he wrote above so the uninitiated would understand how he felt.

In the ritual, the sun rises upon you and you are directed what to do by the season it rises in { told by the direction of your shadow on the ground}. ALL aspects of your life were dependent on its direction on that day, at that time of day. Methodism was drawn from ancient texts and used in your life philosophically. A method that was similar to the Freemasons and King Solomon. Teddy most likely became aware of the symbol and its invisible meaning sometime after meeting J.S. Morton and his son Paul whom he became very close within the following years.

L.C. BAKER said:
In the ritual, the sun rises upon you and you are directed what to do by the season it rises in { told by the direction of your shadow on the ground}. ALL aspects of your life were dependent on its direction on that day, at that time of day. Methodism was drawn from ancient texts and used in your life philosophically. A method that was similar to the Freemasons and King Solomon. Teddy most likely became aware of the symbol and its invisible meaning sometime after meeting J.S. Morton and his son Paul whom he became very close within the following years.

L.C. Baker, you would be correct in assuming Teddy Roosevelt being in the "know." Do you have any ancestors for J.S. Morton say 3 or 4 generations? Ebenezer Morton was in on the Greatest Treasure Recovery of our countries history and possibly the Greatest Treasure Recovery in the World even by today's standards of gold recovery. He was in the know of the Knights Templars Treasures that were recovered to finance the American Revolution. He was in on the meetings in Boston at the Green Dragon with a lot of our Founding Fathers. He was in charge of ship load of treasure and it has not been recovered as far as I know. I know the Island the treasure was concealed and buried. Ebenzer Morton's father was Captain Byrant Morton of Gorham, Mass. Teddy Roosevelt was the man that started the US Government Interior and Conservation and the first of our National Parks. Wonder why? Also he later owned the Island where the treasures were buried that financed the American Revolution. There was 7,290 cubic of gold, silver, church artifacts, jewels and other treasures in this enormous treasure. I have the inventory but where it went after the Revolution is still a mystery.
R

There you go thinking ahead. The best news is there are 6 times as much treasure yet to be recovered than the treasures mentioned above. One of those treasures 1/2 shipload was recovered from Oak Island in 1770 along with another 5 ship loads of the 14th Century. The treasures were loaded onto 18th Century ships and filled 3 of them. You are getting close with Mt. Rushmore but I believe the treasure is somewhere else. There were over two shiploads of treasure of the 17th Century taken out West.

I am gearing up for some hunts. I am going tomorrow to visit the location where Robert Morriss of the Beale Treasure died. Wonder if there are any copies of the Job Print Pamphlet laying around the surrounding areas. I will check with the local home owners.

Also I am investigating a warehouse in Danville where hundreds of gold bricks were found. I hope there is at least one left. That would be $725,000.

There is a lot on my plate. I am also getting ready to go to Washington, Georgia to recover some of the Virginia Bank Gold.

HH! Good LUCK! Have FUN!
You must log in or register to reply here.