I always liked this story, going to post a few things as I work on them. From a research standpoint, it'll be impossible to do a better job than Steve Wilson and Bill Townsley have done on the topic. Lots of solid research out there but I find what you can dredge up online pretty interesting.

Spider Rocks presents a unique history of a site(s), that by all accounts clearly had something on it, but never seemed to surrender the big one no matter what.

Strangely, there aren't very many threads on the topic on Treasurenet...
OP
R

This is one of the first, fairly substantial as well...

This is the oldest I've found thus far, relates to the same area as above. Not nearly as detailed but itsets the stage and contains some unusual details that are present in the longer article.

Carved stone maps, containing European letters of the alphabet as well as Arabic and Roman numerals, were discovered near the West Texas towns of Clyde, Aspermont and Rotan between 1902 and 1909. It was assumed that these stone maps led to buried Spanish treasure, but no treasure has been found and the maps remain an unsolved mystery of West Texas.

The discoveries sparked unprecedented searches for gold or other treasurers in each of those areas that lasted for much of the 20th century.

Amazingly the hundreds of people who dug holes (sometimes with bulldozers) and combed the hills of Fisher, Stonewall, and Callahan counties were never able to determine who buried the treasure or what was actually buried. It was assumed that it was Spanish and some of the symbols that were carved were numerals that appeared to be dates.

The name “Spider Rocks” comes from a spider web-like symbol on the rocks.

A sheepherder from Mexico seemed to know more than the Anglo searchers who dug up the Aspermont Rock — he was able to lead them to a Spanish sword, a silver cross and some Spanish epaulets that were buried some 200 yards to the southwest near a ledge that was the beginning of a large ravine or canyon that ran into the Salt Fork of the Brazos River.

At the Aspermont site a copper plate, a copper key, and a copper dagger were found on top of the map rock.

The search began in 1902 when Dave M. Arnold arrived at the Sembritzki Ranch north of Clyde, saying that he had followed a sheepskin map that led to a buried treasure and if he could find a certain map rock, he could locate the burial site.

Was Dave Arnold promoting a hoax? Anne Sembritzki Fuguay, who was a 16-year old girl when the rock was dug up, stated in 1970, “My mother and father were with him when he found the map rock and they had to chop it out of the roots of a big oak tree.”

One day Arnold disappeared from Clyde and reappeared northeast of Aspermont near the forks of the Brazos River, repeating a similar story. He stayed with the Allen family who lived along the river.

Two Allen sisters, who were 13 and 14 years old when Arnold appeared in 1908, were interviewed in Haskell in 1971 and stated, “We believe Dave Arnold was honest, but they plowed and plowed and they dug up the plot rock, and he couldn’t read a foreign thing that was on it.”

Dave Arnold dug up a third Spider Rock along Gyp Creek east of Rotan in 1909. George McBeth of Rotan, a man with a good memory, was interviewed in 1976, and he said, “When I was 18 years old, I was hired for one day to dig for the Rotan Rock; Arnold had two groups of men digging 200 yards apart.” They found a rock, and Johnny Terrell of Waco placed the Rotan Spider Rock in the Lela Lloyd Museum in Cisco, Texas.

Most of the artifacts found at Clyde and Aspermont were placed in Dr. C. L. Terrell’s drugstore in Haskell and supposedly destroyed by a fire in 1909. Terrell had financed the digging at the two sites.

Duane Hale and Steve Wilson traced down the artifacts in 1976. It seems that many of the copper plates and daggers had survived the fire, as well as the epaulets, the silver cross, drawings of the Clyde and Aspermont maps, and letters sent in secret from the Clyde site in the year 1905.

These are in the Lela Latch Lloyd Museum in Cisco. Evidently the Aspermont and Clyde rocks were destroyed by the fire. Joe Woods and Joe Cauble dug at Clyde as late as 1939. Cauble had also dug in Kent County near Clairmont.

Two determined searchers were Gurney E. Ward, an Abilene photographer, who was at Clyde and Aspermont from 1907 to 1911. Ward died in New Mexico after spending 22 summers digging on a site in the Sacramento Mountains that he claimed was linked to the Clyde location.

Also Frank Olmstead, from La Salle County, Illinois, lived in a dugout northeast of Aspermont from the 1920s until his death in 1948. He was buried in one of the trenches that he dug while searching for the Aspermont treasure.

Much knowledge of the original search at Aspermont was passed down from Bud Jones to Dock Henderson of Rule, Texas, when Jones and others returned to renew their search in 1924. Henderson was 21 years old and lived in a dugout on the site with Jones and his group. Henderson looked for the supposed treasure until his death in 1985.

Searchers, including James and Larry Armour, continue to look for the elusive treasure the Spider Rock maps must point to. 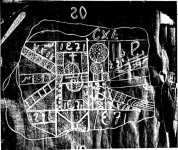 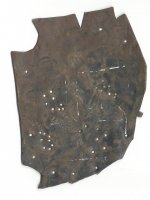 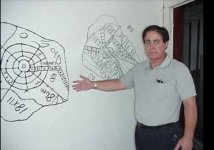 Yes this is one that doesn't get much time in the limelight. The map designs evoke some of the so-called KGC maps floating around and with a bit of imagination - maybe the LUE map as well. Quite interesting how the Dave Arnold character emerges from out of nowhere with promise of treasure and is treated to bed and breakfast by these rural Texans who probably weren't exactly living in luxury.

It's a common theme - many occurrences have been noted. Occurrences in early 20th Century, circa 1930s, and again circa 1980. About a generation apart.

Map suddenly appears. Map purportedly leads to treasure. Frequently, it was a stranger showing up somewhere with it. In the 1930s, he was often a Mexican. Stranger befriends locals. Stranger and locals use map to find enigmatic carvings. Stranger leaves the scene, but locals continue with a full-blown quest, finding more carvings and clues. Speculation implies a clever pattern but never a solution. The word slips out to others, the mystery grows, a legend is born. The legend is often published. Nothing of value is located, but the clues and stories become imprinted. The legend begins to fade but never disappears.

I was personally involved with a 1980 iteration of the theme near Santa Rita NM. There's a method to the madness, and I've got my speculations, but I'm not yet 100% certain what it it.

Early settlers built dugout homes due to lack of timber. I wonder if the "maps" were the product of semi-literate builders or planners, and the treasure seekers were digging up old collapsed shelters ?

Here some other alleged rocks or copies

Does anyone know anything about Bald Eagle Mountain in Taylor County, TX?