The buried ship found on an English estate

The buried ship found on an English estate

Netflix's The Dig tells the story of the Anglo-Saxon longship that was unearthed at Sutton Hoo in 1939. It was an extraordinary find in more ways than one, writes Neil Armstrong.


They began at first light. The strongest of the king's guard, sinews straining, rough ropes chafing, hauled the heavy oak ship from the river on to the shore. And then, with the rising sun slowly burning off the chill morning mist, they heaved the vessel over the plain and to the foot of the hill. The crowds on the slope watched silently as they inched it up to the summit and the graveyard reserved for royal descendants of the one-eyed god. When the craft had been manoeuvred into the trench prepared for it, mourners laid the grave goods in the burial chamber in its centre. Then a mound was raised over it. And there the ship lay, moored fast in the East Anglian earth but journeying through time until, 13 centuries later on the eve of World War Two, a man called Basil Brown discovered it.


The incredible find, dubbed "Britain's Tutankhamun", is the subject of The Dig, a new Netflix film adapted from John Preston's novel of the same name. It stars Ralph Fiennes as self-taught archaeologist Brown and Carey Mulligan as Edith Pretty, the landowner who employed him to excavate the mysterious barrows on her estate at Sutton Hoo overlooking the River Deben in Suffolk.


Pretty, a widow who was interested in spiritualism, had a feeling about the mounds. They were thought to be of Viking origin. A houseguest had once seen a ghostly figure among them, and there were long-told local legends of buried treasure. 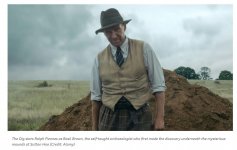 Brown was a Suffolk man who had left school at the age of 12. He had been a farm labourer and an insurance agent but had also taught himself several languages, astronomy and archaeology. That led to him being employed as an archaeologist by Ipswich Museum, and it was the museum that recommended him to Pretty.


He began in June 1938 with some of the smaller mounds, and found evidence that they had been raided by grave robbers but also a bronze disc suggesting they might be earlier than Viking-era. When he started on the largest mound, in the summer of 1939, as war clouds gathered, he quickly came across lumps of iron that he identified as ship's rivets. And then he found it — an astonishing 90-ft (27.4m) vessel, big enough to accommodate up to 20 rowers on each side. The timber itself had dissolved into the soil along with any human remains but a clear imprint remained: a ghost ship more than a millennium old.


Other ship burials had been excavated but nothing of this size. Before this, a 78-ft (23.8m) Viking vessel in Norway, discovered in 1880, had been the biggest. Because of previous finds elsewhere, Brown knew there might be a cargo of grave goods and on 14 June, he found what he thought could be the burial chamber — a wooden hut-like structure, now disintegrated, which had been constructed in the centre of the ship. But by now the men from the British Museum and Cambridge University had got wind of his great find and, just days later, muscled in on it. Before he could explore further, he was sidelined and relegated to basic labouring. The professionals couldn't have a local man — a mere amateur — dabbling. Why, the fellow didn't even have a degree!


A team of archaeologists was brought in and it was one of them, Peggy Piggott, who, on 21 July, just two days after her arrival, found the first piece of gold. Then she found another. And before long they had uncovered a glittering haul of more than 250 items for which the expression "treasure trove" barely seems adequate. There were feasting vessels and drinking horns and elaborate jewellery, a lyre and a sceptre, a sword, stones from Asia and silverware from Byzantium and coins from France (which helped date the hoard).


There was a gold buckle engraved with intricately interwoven snakes and beasts — a piece so extraordinary that the British Museum's keeper of Medieval antiquities almost collapsed upon seeing it; jewelled shoulder clasps and belt fittings; a wonderful, ornate helmet with a full face-mask — the haunting visage of some ancient hero seeming to gaze out across the centuries.


What the discovery meant 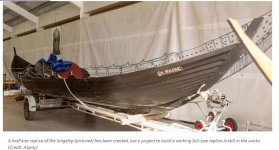 Brown’s find literally caused the history books to be rewritten. The ship and its contents were, it transpired, from the Dark Ages, and the discovery illuminated those four centuries between the departure of the Romans and the arrival of the Vikings, about which so little was known. The Anglo-Saxons who ruled over England's various kingdoms during this time had been thought a crude and backward people — primitive almost — but here were exquisitely made items of great beauty. This was a society that valued skill, craft and art, and that traded with Europe and beyond.


And these relics of a sophisticated, lost civilisation turned up just as our own was being threatened with obliteration by the Nazis. The lead archaeologist gave a speech to visitors to the site, and had to shout to be heard above the roar of a Spitfire.


When author and journalist John Preston, whose book about the disgraced British politician Jeremy Thorpe, A Very English Scandal, was recently adapted into a hit TV series, discovered that Piggott, his aunt, had been involved in the excavation, he researched the story and immediately recognised what a rich seam it provided for a novelist. The Dig was published to acclaim in 2007. Robert Harris called it "a real literary treasure", and Ian McEwan proclaimed it "very fine, engrossing, exquisitely original".


Producer Ellie Wood, who has previously worked on a number of TV adaptations including Decline and Fall, Bleak House and The Line of Beauty, says she wanted to make a film version as soon as she read the manuscript of the novel in 2006, before it was even published.


"It was incredibly cinematic," Wood tells BBC Culture. "As the ship is revealed, so are the inner lives of the people involved, and that's what seemed so powerful and original to me. I could feel the profound emotions of the characters, although they are unable to express them. All those simmering feelings kept in check by British reserve and the class structure. There was a Remains of the Day feel to it."


Moira Buffini, co-creator of the TV hit series Harlots, wrote the screenplay. "Ellie Wood sent me the book in 2011 and I read it and immediately thought, I have to write this," Buffini says. "It was that instant. You know you're on to a good thing when you feel like that about a project, and it doesn't happen that often. 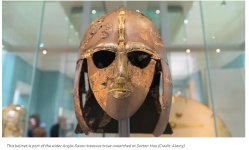 "The book profoundly moved me. I just felt raw when I finished reading it. I think it conveys a feeling of the fragility of everything, including us. As I was writing the screenplay I came to think that the act of opening up the earth — of digging down to disinter the dead — in a way opens up everybody who is living."


Over the years, various actors have been linked to the film, including Cate Blanchett and then Nicole Kidman. Kidman reportedly had to pull out because of conflicting work commitments and Carey Mulligan stepped in at fairly short notice.


Wood says that, although it has taken a long time, her determination that The Dig would be made never faltered. "I think it was because of Basil Brown's story," she says. "Due to class and intellectual snobbery, his invaluable work went unrecognised for so long, and I felt it was really important that more people should know what he achieved."


Brown's name was not mentioned in British Museum's permanent display of the Sutton Hoo treasures until relatively recently. But although his crucial contribution is now acknowledged, there is much that remains uncertain about the ship burial. Who was it honouring? The lead candidate is Raedwald, a powerful regional leader who died around 624, and who was part of a dynasty that claimed descent from the Norse god Woden. He was the first English king to convert to Christianity, while also being cannily careful not to upset the pagan gods.


And what exactly was the nature of the vessel? Was it a warship or more of a ship of state — a 7th-century Britannia? We may be in a better position to judge when a project to build a working full-size replica of the ship comes to fruition. It will give us a far better idea, for example, of exactly how it handles on the water. The Sutton Hoo Ship's Company aims to have its vessel built and ready to begin trials in three years, and hopes that The Dig will generate more interest in its undertaking.


The film is understated but powerfully affecting, with tremendous performances from both Fiennes and Mulligan. During a recent Q&A event for the film, Fiennes explained how he first read the screenplay on a plane “and at the end of it I was just in tears. I can't quite tell you why, but it's something to do with the integrity of the people unearthing this thing which represents something to do with nationhood."


And current circumstances mean its depiction of a world on the precipice of disaster resonates in a way unforeseen at the outset of this project.


"I do wonder if we all now have a keener sense of our own mortality, of our insignificance in the grand scheme of things," says Buffini. "But I think there's something very hopeful in the idea that we are links in an unbroken human chain. I gave Basil the line, 'From the first human handprint on a cave wall, we are part of something continuous'."


The Dig is on Netflix from 29 January.
https://www.bbc.com/culture/article/20210127-the-buried-ship-found-on-an-english-estate
OP 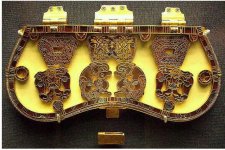 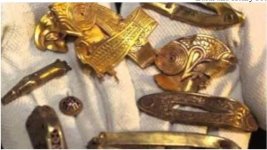 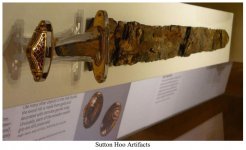 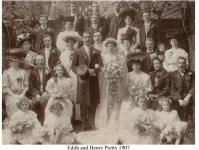 Just watched it and really enjoyed the story!
You must log in or register to reply here.

An adventure from my life....

I really don't know where to start here, been isolated so long.