Adventures in the Apache Country; A Tour Through Arizona and Sonora, with Notes on the Silver Regions of Nevada, by J. Ross Browne (New York: 1869) 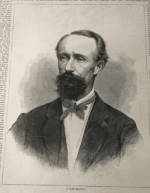 THERE is a class of men peculiar to our new mineral territories to whom the world has not yet done justice. In truth they are but little known individually, though in the aggregate they have accomplished wonderful things. I speak of those vagrant spirits, commonly called “prospectors,” who never make any thing for themselves, but are always on the move to make fortunes for other people. Regular miners, traders, and speculators belong to an entirely different genus. They come in after the way has been opened; but with them the spirit of adventure is not a controlling power. They are no more to be compared with the genuine “prospector” than the motley crowd of merchants and artisans who flocked over to the new world in the tracks of the great Columbus are to be named in the same day with that renowned discoverer.

The prospector is a man of imagination. He is a poet—though not generally aware of the fact. Ragged and unshaved, he owns millions, yet seldom has two dimes to jingle in his pocket—for his wealth lies in the undeveloped wilds. The spirit of unrest burns in his blood. He scorns work, but will endure any amount of hardship in his endless search for “rich leads.” There is no desert too barren, no tribe of Indians too hostile, no climate too rigorous for his researches. From the rugged canons of the Toyabe he roams to the arid wastes of the Great Basin. Hunger, thirst, chilling snows, and scorching sands seem to give him new life and inspiration. It matters nothing that he discovers “a good thing”—a nest of ledges, worth say a million apiece—this is well enough, but he wants something better; and after a day or two spent in “locating his claims” he is off again—nobody knows where—often with scarcely provision enough to last him back to the settlements. He travels on mule-back, when he happens to own a mule; on foot, when he must; with company, when any offers; without, when there is none; any way to be driving ahead, discovering new regions and locating claims. He locates so many claims that he forgets where his possessions are located. If he discovered a ledge of pure silver, six feet thick, he would die in a week if he had to work it on his own account. His industry runs in another direction. Variety is the spice of his existence, the motive-power of his life.

By no means do I intend to depreciate the services of this class of men. They have done more to open up our vast interior territories to settlement and civilization than all the scientific expeditions ever sent across the Rocky Mountains. The indomitable courage, the powers of endurance, the spirit of enterprise, the self-reliance and the fertility of resource exhibited by this class of men under circumstances of extraordinary difficulty, have no parallel in the annals of daring adventure. Where is there a desert so barren or a mountain so rugged that it is not traversed or explored by the irrepressible Prospector? In the wild declivities of the South Pass, in the desolate wastes of Colorado and Utah, in the alkali plains and sage-deserts and rugged mountain ranges of Nevada, you find him with his pick and shovel—ever hopeful, ever on the strike for “a new lead.” He is the most sanguine of men—the most persistent of explorers. Neither disappointment nor the vicissitudes of climate can check the ardor of his enthusiasm. As privation is his lot in this world, it is to be hoped he will strike “a better lead” in the next.

Early in the summer of 1852 a train of sixty wagons left the Mountain Meadows for San Bernardino. The party consisted chiefly of Mormons, but among them were some Gentiles who availed themselves of the protection afforded by the train against the attacks of hostile Indians. The road taken was that known as the old Spanish trail between Salt Lake and San Bernardino. It was the intention of the emigrants to cut off a bend in the road running by Las Vegas Springs, which approaches within thirty or forty miles of the Rio Colorado, and considerably increases the distance. At the Armagosa a difference of opinion arose as to the proper direction to be pursued—some being in favor of striking straight across the desert, while others, who knew the terrible sufferings likely to be encountered from want of water in those arid wastes, thought it more prudent to keep within range of the river. As usual in such cases, the discussion ended in a quarrel. Fifty-one of the wagons started down the Armagosa, determined to gain the old road again and follow the beaten track. The remaining nine crossed the range of mountains between the Armagosa and Death Valley. On reaching Furnace Creek another dispute arose. The weary wanderers were in the midst of a wilderness, with nothing in sight but barren mountains and desolate plains save the wretched little water-hole at which they were camped. Seven of the wagons finally started to explore Death Valley for an outlet to the north-west. The other two struck out to the south-west; but were soon lost in the rugged declivities of the mountains bordering on Panamint Valley. On their route they discovered the skeletons of three men, at a point called Poison Springs —the waters of which are supposed to cause death. The bones of cattle and of various wild animals were found scattered about in the vicinity. From the train that went down the Armagosa there was a further division of three men, named Farley, Cadwallader and Towne; who, tired of the slow rate of progress and the constant dissensions that prevailed, determined to strike out for themselves. Providing themselves with some jerked beef and such other articles of subsistence as they could carry on their backs, they left the wagons, taking a route a little north of west. For several days they wandered about in the wilderness, suffering greatly from thirst and heat. At Day-light Springs they found water. Thence they crossed Death Valley and ascended the range of mountains lying between that desolate region and the Valley of Panamint, at a point called Folly’s Pass. In the course of their wanderings they saw many wonders in the way of mineral ledges; but were unable to examine them carefully owing to their sufferings from thirst and the necessity of reaching some spring or water-hole while they had strength. At one place, supposed to be in the foot-hills of the Panamint range, they discovered a silver-ledge of such extraordinary richness, that in the language of one of the party the “virgin silver glittered in the sun.” Weary as they were, and precious as their time was, they stopped long enough to break off a few masses of the ore and locate a claim. The ledge cropped up boldly out of the earth, showing a well-defined vein of four or five feet in thickness, and so rich that the virgin ore was visible all over it.

After great hardships and terrible suffering from thirst, the three men found water at a place called the “Last Chance Springs,” where they camped for several days. While resting there, the two wagons that separated from the nine at Furnace Creek, came in with the small party accompanying them. They had been many times lost; their stock was nearly broken down with fatigue and thirst, and they were now seeking to get on some known trail that would lead them to California. A Methodist minister named King, with his wife, occupied one of these wagons. The three men, Farley, Cadwallader and Towne, told King of the wonderful discovery they had made, and showed him the ore they had obtained from the ledge. King knew but little of mining practically, but he was an intelligent man and saw no reason to doubt the representations made to him. Provisions were getting short, however, and there was a long journey before them. It was not possible to go back to the ledge and make any further examination of it without a strong chance of perishing in the attempt. The party then joined together and pursued their way in a south-westerly direction till they struck the San Bernardino road and entered California. King and his wife had relatives in the Santa Clara Valley, and settled there. Accounts given by them of the great silver ledge attracted considerable attention, though not so much, probably, as would have been the case after the discovery of the Washoe mines. The people of California were not prepared to attach any great importance to discoveries of silver while their attention was so fully occupied in the development of the gold mines. The Kings had with them a specimen of the ore presented to them by the discoverers, which of course tended to authenticate their statement; but they were not skilled in getting up speculations, and consequently the matter soon died out, so far as they were concerned.

Farley, Cadwallader, and Towne separated on their arrival at San Bernardino. Cadwallader went on a prospecting expedition to Sonora. Farley and Towne roved about the southern country for some time, finally stopping at Los Angeles. While there they talked freely about their great silver ledge near Death Valley. The attention of some practical gentlemen in Los Angeles was attracted by the specimens of ore which these two men carried with them. A company was organized and capital paid in to make the necessary tests and fit out an expedition to work the ledge. Some of the ore was taken to San Francisco by a member of the company and assayed. The yield surpassed their most extravagant anticipations—being eighty-five per cent, of silver. Such a yield from croppings, taken at random from the surface, by travellers hurrying along on a journey of life or death, was well calculated to inspire confidence in the richness of the ledge. Provisions and mining implements were purchased, and a party fitted out, under the guidance of Farley, to find this wonderful deposit and work it. On the approach to Folly’s Pass, Farley got into a quarrel with a member of the party named Wilson, in the course of which Wilson shot him dead. There was no hope of finding the ledge after this unfortunate event without the aid of one of the remaining discoverers.

Not knowing what else to do, and none being willing to stay behind upon an uncertainty, the members of the expedition returned to Los Angeles, where they procured the services of Towne as a guide. Another start was made, and all went on successfully till they reached Owen’s Lake, on the eastern side of the Sierra Nevada Mountains. There Towne was taken with a fever and died. It seemed as if fate were against the enterprise. Compelled once more to return to Los Angeles, the company next set to work to find Cadwallader, the only surviving member of the party by whom the ledge was discovered, and who knew of its location. Without his guidance the whole enterprise must prove a failure. A reliable agent was sent down into Sonora to search for him, and make him such propositions as would secure his services. The search was successful, in so far as Cadwallader was found; but he was in such a condition from habits of intemperance into which he had fallen, that it was almost impossible to get him sober. When he became sober enough to listen to any proposition understandingly, he died.