Peg-Leg Smith, whose death was recently announced, as most of our readers are aware, was an old mountaineer, and one of the most noted of his class. He was the contemporary of Greenwood, Bill Williams Walker, Joe Meek, Black Harris, and the older class of mountaineers, and his active career had well nigh closed when Fremont made his first trip to the Rocky Mountains. For many years he has lived In California, but those who have only seen him here as a poor, broken down old man, can have but little idea of what he was in his younger days, when by his superior sagacity and coolness he was instinctively chosen the leader, either in an Indian fight or a horse stealing raid. Many stories are told in the mountains of his daring achievements and hair-breadth escapes, some of which are doubtless fictitious, but his least adventures, if properly written out, would till an interesting volume. One of his most successful and profitable adventures occurred about forty years ago, when, with some dozen followers, he made a trip to Southern California. Either from some misbehavior on their part, or on account of a suspicion as to their intentions, the Californians ordered Peg-Leg and his party to leave the country. They left, as entered, but took with them between three and four hundred head of horses. The Californians immediately raised a considerable force and started in pursuit of the raiders following them through a pass of the Sierras. Being well mounted, the Californians were rapidly gaining on Peg-Leg's party, who were encumbered with their pack animals and the large drove of stolen horses. Knowing they would be overtaken, Peg-Leg resorted to strategy. After crossing a desert of some twenty or thirty miles, they came to a stream of water where the party divided, four of the men being sent ahead with the horses and the remainder secreting themselves among the willows along the bank of the stream. As anticipated, the thirsty Californians dismounted for a drink as soon as they reached the water whereupon Peg-Leg and his party rushed from their hiding place with an Indian war whoop, and ere the astonished Californians recovered from their surprise, their horses were stampeded and driven off by the daring mountaineers. The Californians were thus left on foot, and how they got back was never known. Peg-Leg and his followers returned to the mountains, with what they considered their honestly acquired property. This incident was related to us in 1845, at Fort Hail, by an old mountaineer, who was one of the party.

Dan Higgins, an old time prospector who has spent much time in searching for coal and minerals on the Colorado desert, returned Sunday after a long trip into the supposed "Lost Peg Leg" mine country, says the Yuma Sentinel. He brought back some fine specimens of silver ore which he took from the veins, and also some excellent samples of coal which he found in narrow seams, near where he picked up the large piece several months since. The largest seam was about six inches thick on the surface. The quality is good. It has all the appearance of the imported channel coal. He believes that the small seams will all unite when depth is attained. There is no doubt but that good coal will be found in paying quantities in the coal measure which is known to exist in the great valley just west of Yuma.

Another Search for the Peg Leg

A CITY IN THE DESERT.

THE DISCOVERY OF A PATRY [sic] OF YUMA PROSPECTORS.

In Searching for the Pegleg Mine They Came Across the Ruins of a City Built by a Prehistoric Race.

San Diego, July 22. The ruins of a prehistoric city have just been discovered by a party of prospectors from Yuma, while on the Colorado desert in search of the Peg-Leg mine. The wind had laid bare the walls and remains of stone buildings for a distance of 420 feet in length by 260 feet in width. Gigantic pillars, quaintly carved to represent dragons' heads and rattlesnakes, still stand in the sands of the desert, supporting on their tops huge slabs of granite weighing many tons. The frieze ornamentation resembled Egyptian sculpture and exhibited a greater degree of skill than is possessed by the Indian artisans of the present day.

Fragments of pottery were found underneath the debris, and together with a crumbled piece of frieze, were brought by Hank Ferguson, one of the prospectors, to this city. One of his associates came to San Diego and the others returned to Yuma nearly two weeks ago, but the story of their discovery was carefully guarded in the hope that in some way they might profit by it. Ferguson called the matter to the attention of H. C. Gordon, who interested John H. Gay, jr., a wealthy man of this city, in the discovery and a week ago yesterday, in company with four others, they went to the desert to explore the rivers. They were driven back by a sandstorm, reaching this city today, but will make a careful examination of the rivers later in the season, when the conditions are favorable for an extended exploration.

From the relics exhibited it is evident that an important archaeological discovery has been made.

Here's another reference to the Ferguson story (courtesy Google Books). Sounds a lot like the Kinkaid discoveries in the Grand Canyon as reported by the Phoenix Gazette April 5, 1909. 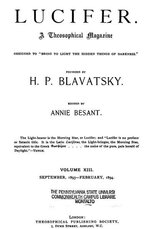 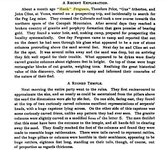 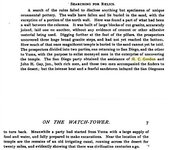 Thank you for posting that!

When I first read it, I thought about the people who found the ruins of the Cleopatra movie set out in the desert...

Good luck to all,

Vikings?
again, there _are_ stories of them having visited California (unsubstantiated, of course) - and there are also stories about one of these ghost-ships that comes and goes with the shifting sands was infact a Viking-ship ... no?


Oooops - should have read Springfields 'clippings' before opening my big mouth - sorry yall.
Last edited: Nov 16, 2013
You must log in or register to reply here.

"Pegleg Was A Liar" - The Pegleg Smith Chronicles, Continued