Found this in northern Illinois. The Wedge Patent. Unable to find any info. TIA. DFW

It is a napkin holder, and most likely had an enamel decoration attached to the hole. Lots of different designs. Early 1900s. I saw some like that also. The one I found may have been an earlier design.
Upvote 0
C

I saw some like that also. The one I found may have been an earlier design.
Click to expand...

Interesting little thing. I don’t think we can say for sure this was a napkin clip, for reasons which will become clear.

Although the patent was filed in the US in 1909 and granted in 1910, it was filed as a “foreign patent” and so I can’t find a picture in the US database. The original patent was British, from Thomas Morton of Moseley, Birmingham for which I can only find the abstract, not the patent in full. At least for the moment. It reads (with the numbers referencing the illustrations in the patent):

Improvements in Clips.
14,778. Morton, T. June 24. Clips, flexible-jaw. A serrated spring jaw 22 is pressed by the bulbous or roller end 16 of a rod 15 mounted to slide in the inclined hollow upper portion of a U-sbaped frame 12, the spring having a raised portion 23. A similar rod 15 may also be mounted in the lower part of the frame 12. The spring jaw 22 may be dispensed with, the enlargement 16 acting directly.

There are numerous small items in various shapes to be found bearing the words ‘The “Wedge” Patent’ – some highly decorative and some not – often with the addition of a 1909 date and/or the patent reference “14,778”. Sellers variously describe them as clothing clips, tie clips, money clips, napkin clips and a variety of other terms. However the words just refer to the fact that the devices rely on Morton’s patent for “improvements in clips” which could be used for a multitude of purposes. Difficult to say what yours is from with pieces missing. Even when complete, it can be a challenge to guess the purpose.

This one, I’m pretty sure, was a tie clip rather than a napkin clip (the seller wasn’t certain): 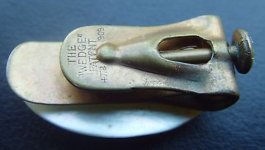 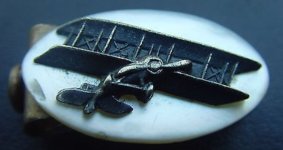 May have been gold plated
Upvote 0

Money clip circa 1909
Upvote 1
You must log in or register to reply here.

Going through finds from 15 years ago and finding many unidentified items.