I’ve got a site where I’m noticing more and more of these flakes with roughly a quarter inch of retouch. They are found near the top of a bluff on a ledge so I’ve ruled out water action like creek chatter or farming practices. I’m trying to wrap my mind around them, I understand a quick cutter but why only sharpen a small area and why chose such a small flake? Plenty of fully developed biface and uniface tools are around so it makes me wonder why go back to a flake? Are these a purposeful type to preform a certain task? … any thoughts or wags are welcome, I know it’s not as exciting as a Clovis but I’m trying to reconstruct the past, and more details make for a better picture. 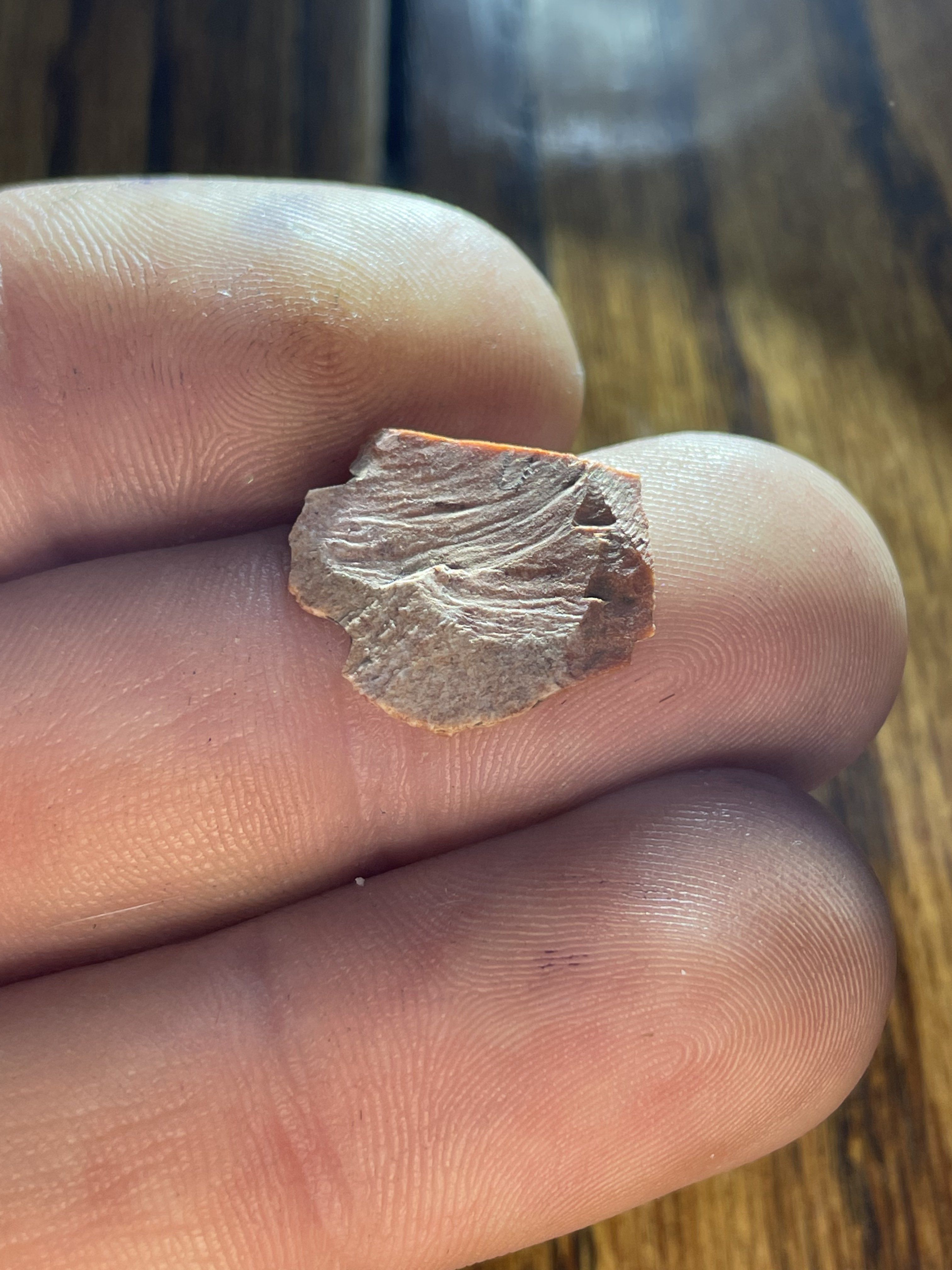 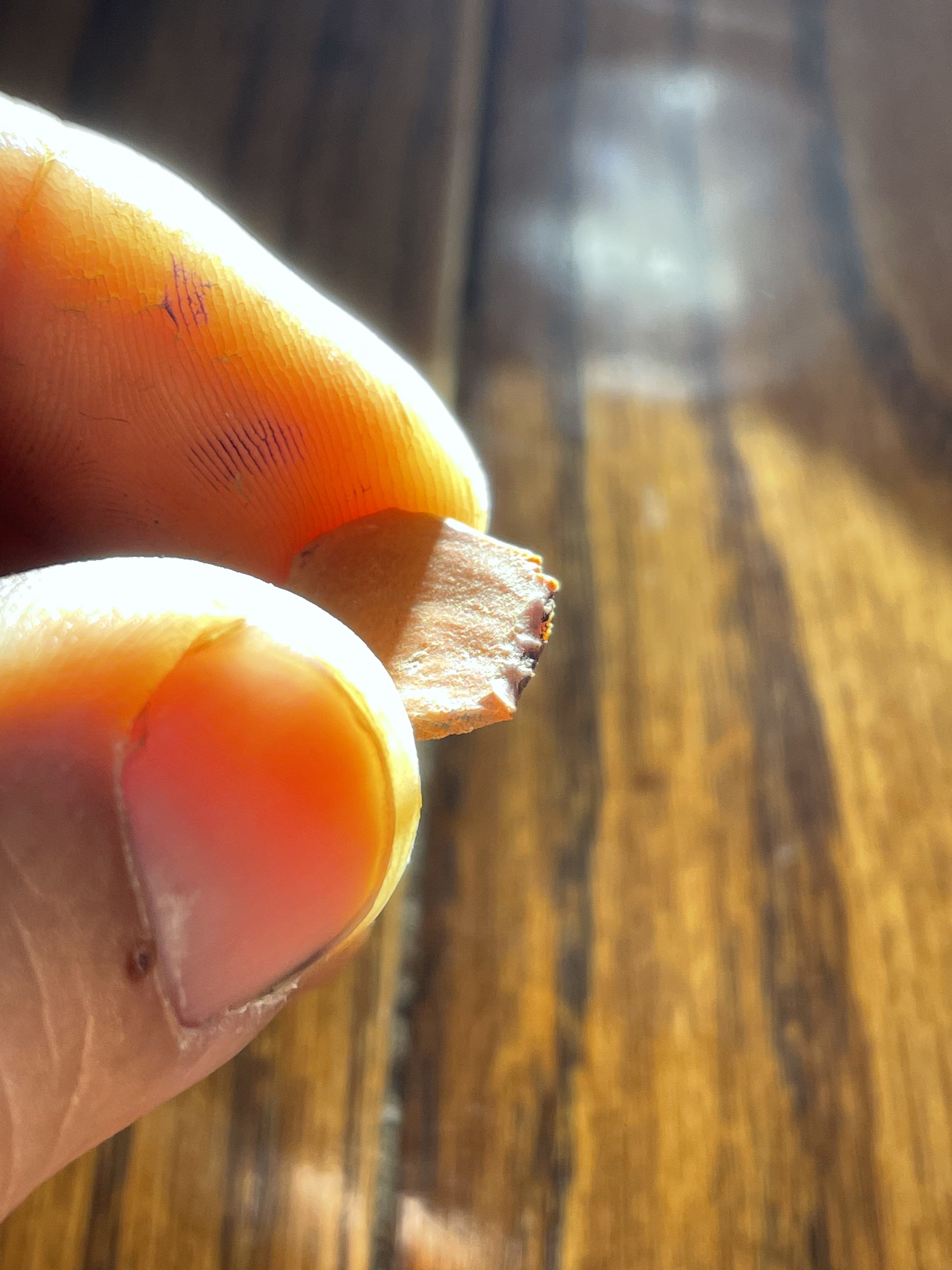 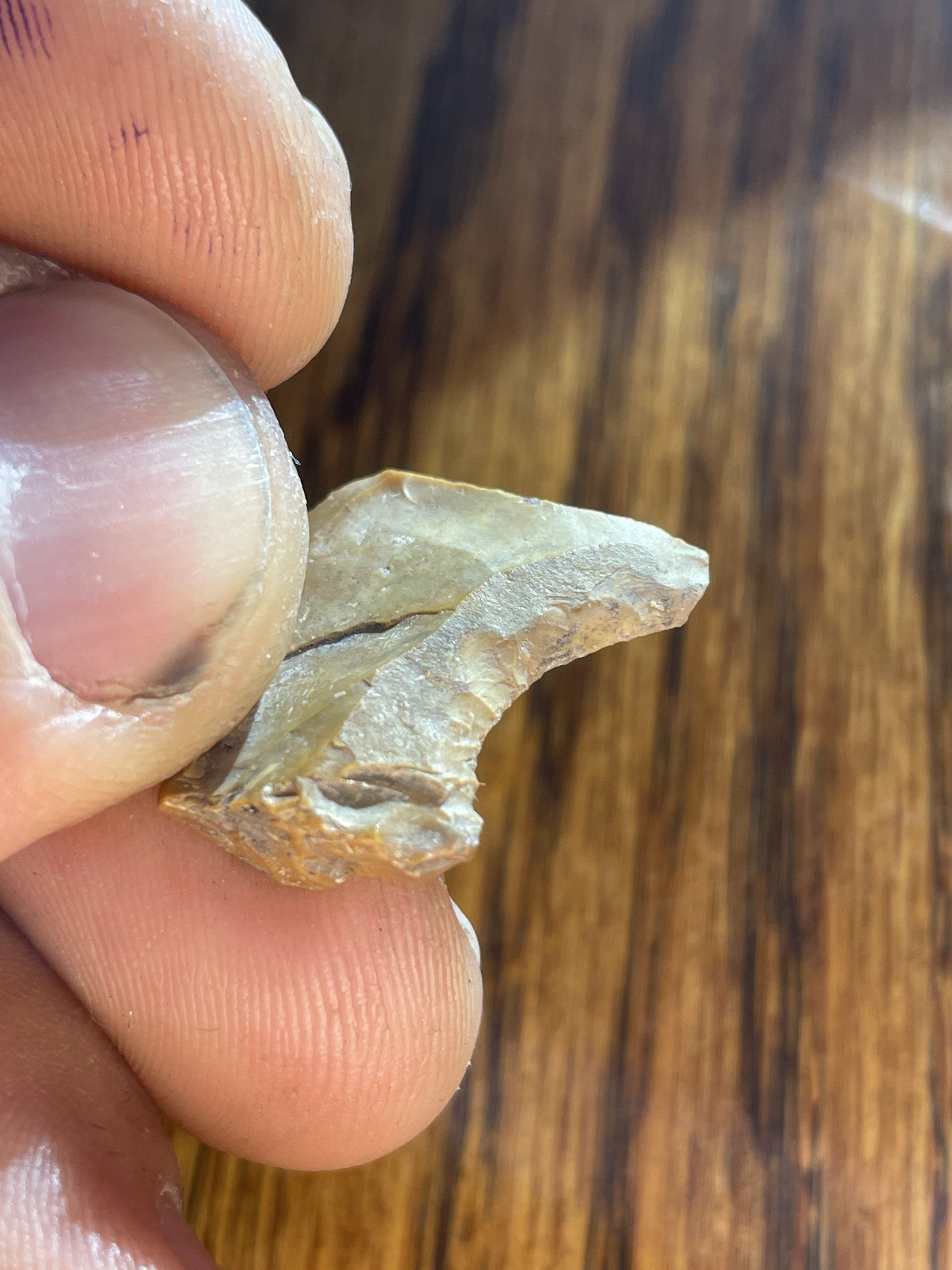 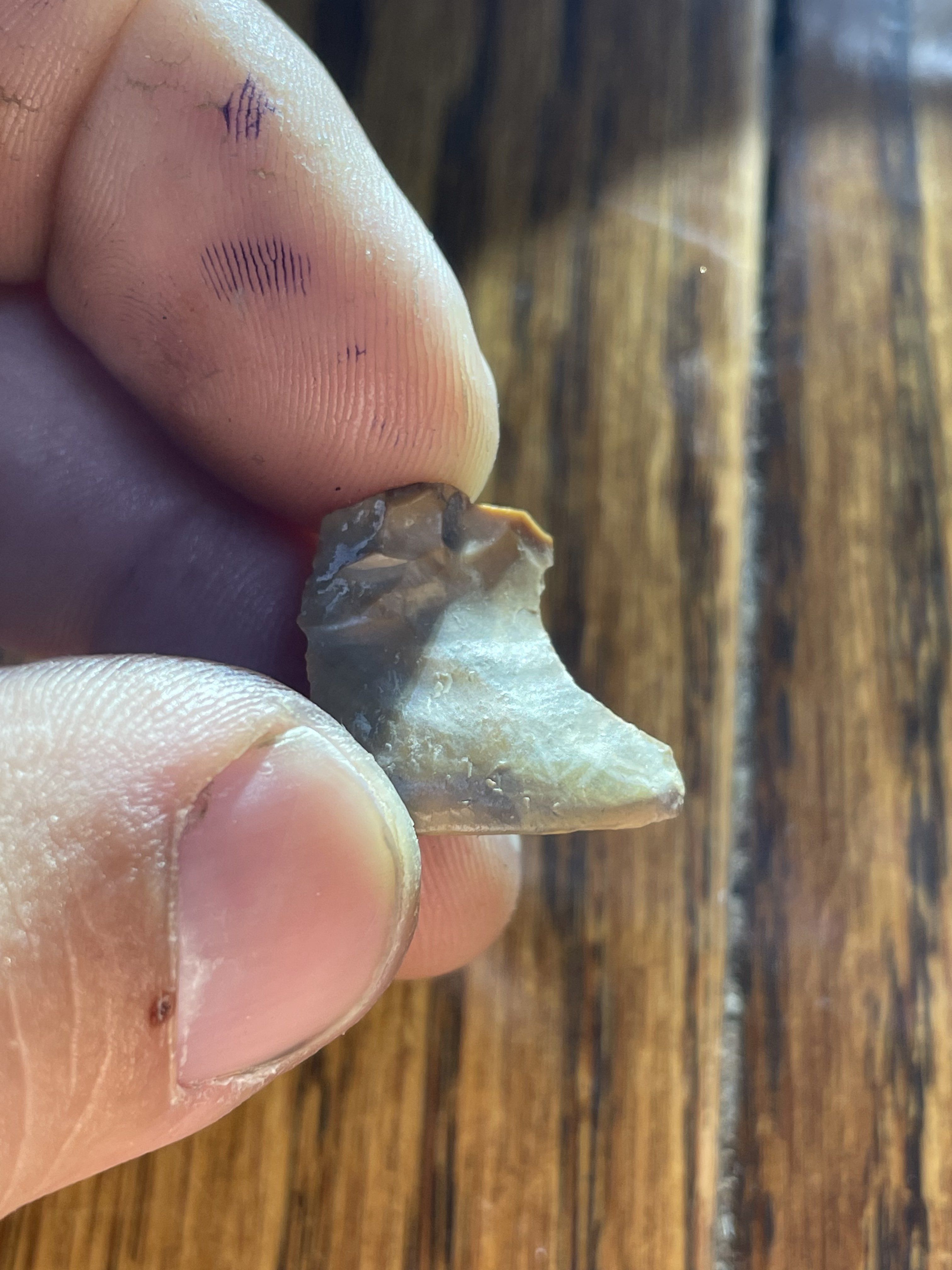 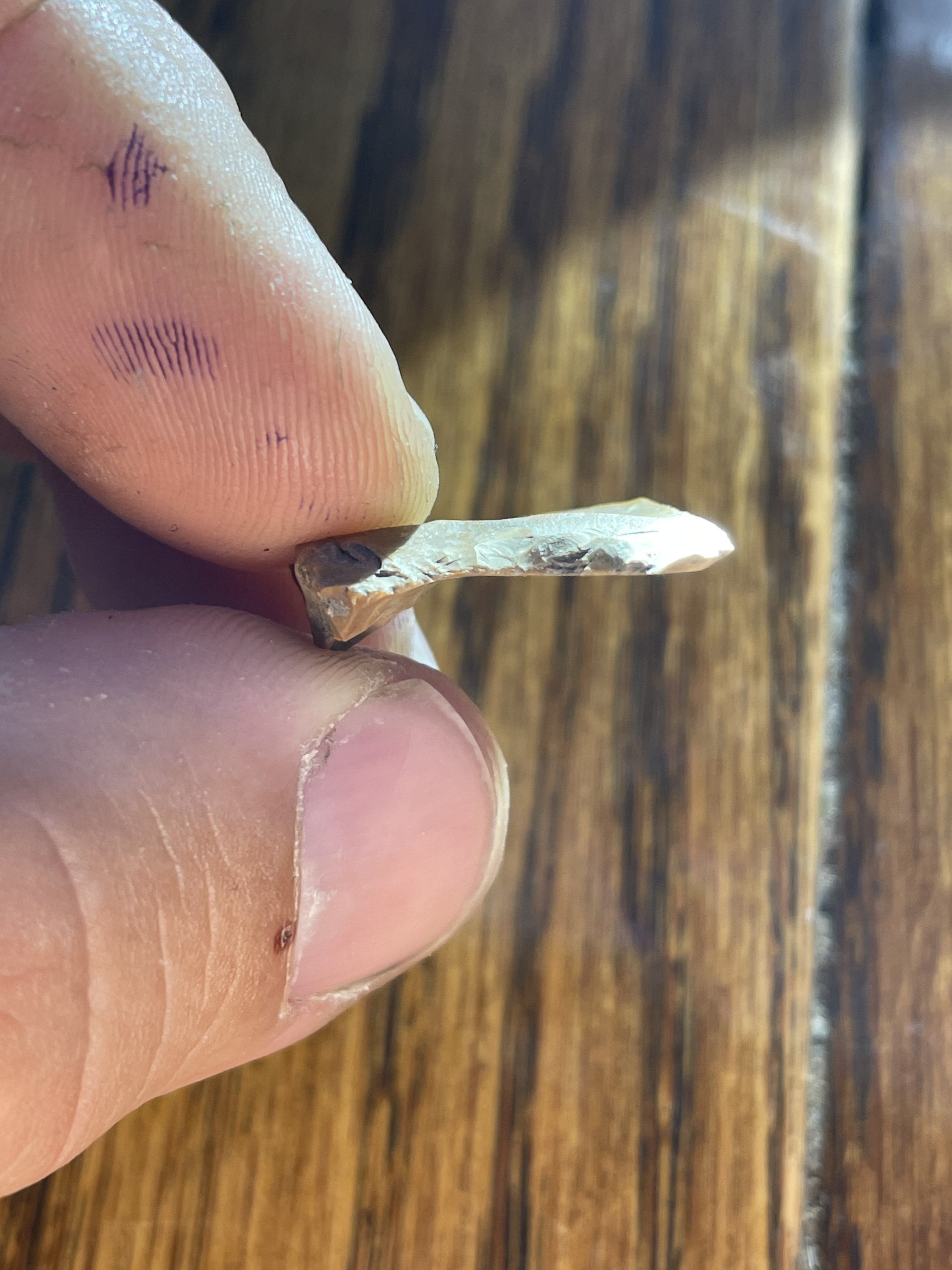 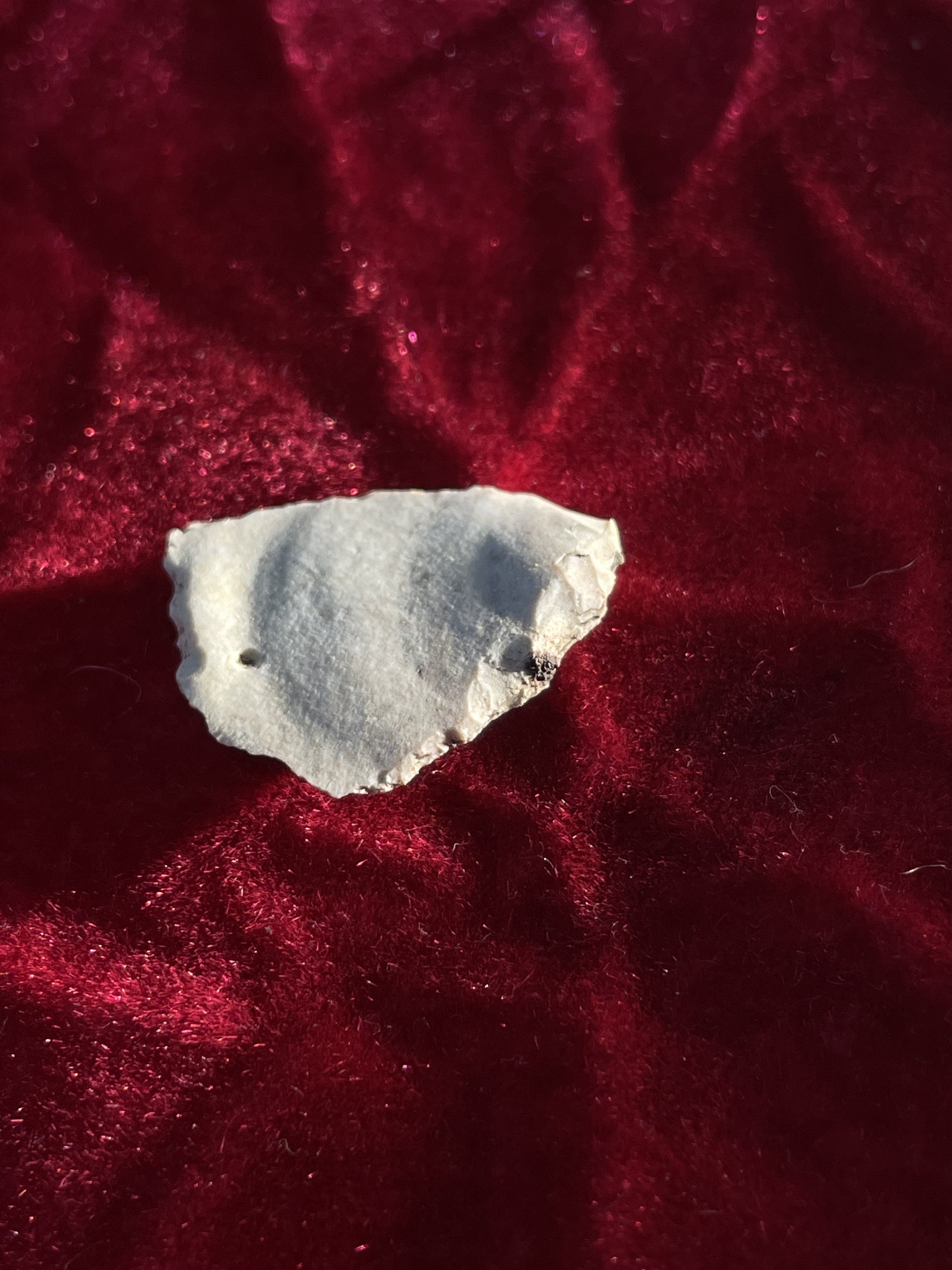 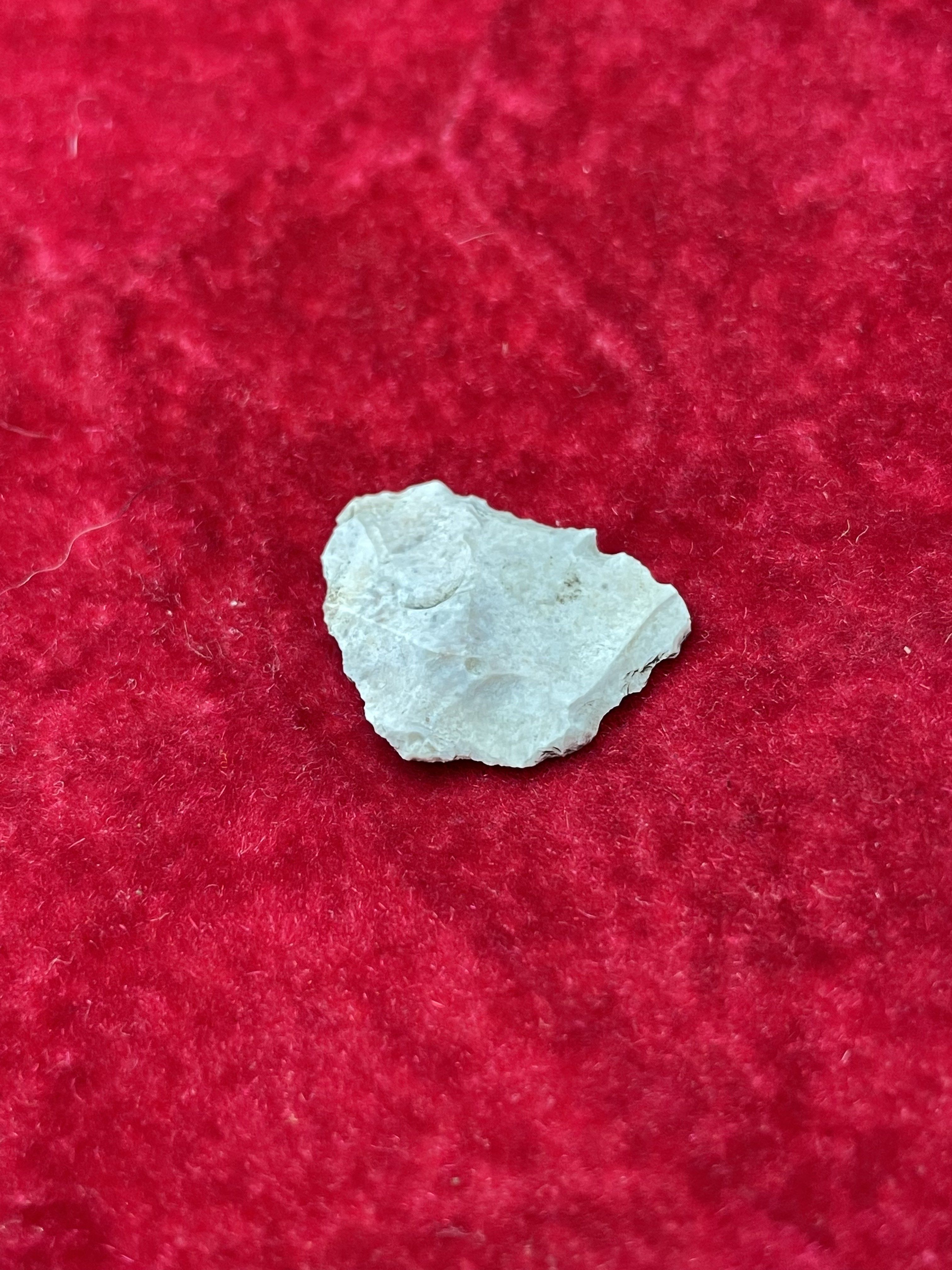 From the perspective of 35+ years of studying exactly such stuff, to the near exclusion of "points" (Jack Webb voice: "Just the tools, Ma'am"):

People virtually disable themselves from understanding NA tools by focusing on "arrowheads" early on. Once the assumption is established that "arrowheads" (points) are real artifacts, then the rest of the lithic assemblage (except for no-brainers like endscrapers) must only be waste flakes, produced and discarded in the process of making bifacial points.

If they would only question their default assumption -- that they would have reduced a 2-3 pound nodule to one point, letting the rest go to waste, it might dawn on them that, unless they were at an outcropping of easily available chert, or a rich alluvial deposit of it, the idea underlying such profligate behavior is absurd : you don't waste what you need to survive (!) (Not to mention that points have very few uses, while flakes have many).

The Paleoindians in particular, but all NAs in general, had well-developed strategies for making good use of everything (or at least producing pieces that could be turned to good account -- 8n the case of the PIs, often several possible ones, the choice depending on the need of the moment). Imagining otherwise is the lithic analogue of assuming that they only ate the steaks and roasts, letting the dogs have the rest of the animals they harvested. It also depends on ignoring the evidence to the contrary in front of their faces.

In point of fact, the flake (the "waste flake"/"debitage" of the arrowhead hunter) was the single most useful (and used) item in the lithic assemblage -- evidence of which you're noticing and bringing to attention.

The sharpest, razorblade-like edge you can produce is the un-altered edge of a flake, just as it comes off the interior of a core. Archaeological replicators have skinned and butchered entire buffalos with single flakes, without creating use-wear in the process. Other times, other uses have left evidence of use on their working edges (as on some of yours) and, in still others, the edges have been refreshed by flaking, proving intentional creation/use beyond argument, without needing recourse to an electron microscope.

Further : in light of this people can (once they pull their heads out of the "arrowhead" obsession) grasp the significance of the many flake cores they find (and generally discard unless they're in Ohio and finding pretty colored ones of baked Flintridge). Previous to pocket knives and pants pockets to carry them in, people out & about carried such cores with them, engineered so that the next good flake removal was set up somewhere on the edge configuration. Need a fresh, sharp edge ? Just punch one off.

Once people stop assuming they know it all and start paying attention to actual relics, as you're doing, all kinds of neat, new information starts getting noticed and processed into a more accurate impression of life in the past.

I think the most likely explanation is that they are something similar to creek chatter. As flakes fall into the chip pile under the knapper's feet, they collide with other flakes. Then the knapper moves his feet back and forth while working to change postions, or just stretch a bit, and flakes get kicked into one another. Then the knapper is done and walks over the flakes, knocking them around a bit more.

Even with lot's of windshield time today to overthink on it, that's all I got.
OP

Thanks for the response uniface, been a bit busy to sit down and digest your post properly but I’d certainly agree with you, it does have me wondering though, what advantages are there to devoting time to fully formed points? If you can cut with a large blade why make a knife? Not trying to counter your point just makes me wonder, status? Art? A benefit not coming to mind currently.
Also Keith I can see your side, I hadn’t thought of that being a possible mode to cause “chatter”… I’m alway careful to be aware that, many if not all of us, want the things we find to be meaningful and can try to force a rock to be more…
I will say I have a shoebox size container full of flakes from this site and I have gave them a once over for signs of additional working and only a tiny fraction less than a percent show the kind of characteristics that I showed here, that makes me lean towards an intentional revisit to the flakes.
The one with the flakes on an inside curve almost has me thinking a spokeshave… but the size gives me pause.
I’ve found others that look like they were on their way to being a triangular arrowhead but weren’t finished for whatever reason. The third one I posted seemed potentially fit that process although it would be very early in that process.
As always it’d be great to know exactly how these were used, cutting, skinning, engraving, shaping wood, inset as a series of microblades in a larger tool.
Thanks for the responses great food for thought

Yeah, that spokeshave looking one got me too. Certainly looks intentional. But then you mention the cutting edge is like a quarter of an inch, and that's hard to wrap my head around. I've messed around some with flake tools, like for making arrows shafts, as an example, and just can't see it. Then I thought maybe a kid's tool. Like there's this little kid underfoot, and he wants to do what the grown-ups are doing, so someone pops a few pressure flakes off a waste flake to make the kid a "real tool", then has him sit and peel bark off twigs. Kid feels like he's helping and is occupied for awhile. Even with that, though... the tools are so small!

I spent a few minutes and dug around in about a gallon of my (recently made) waste flakes. I found one, that, maybe, just barely, is similar. I can't get the detail to show up right in the photo, even after a dozen tries. Best I could come up is below. "Spokeshave" area is 6 mm (just under a quarter inch: 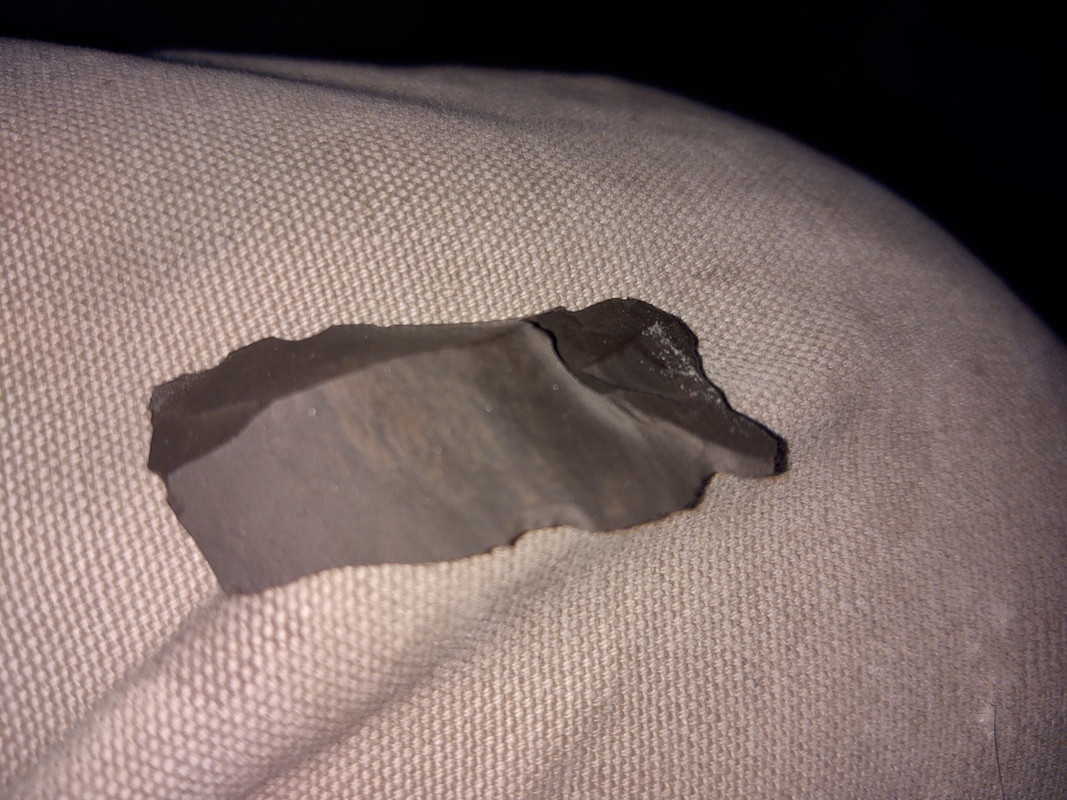 Thanks for the food for thought I think I’ll keep them separate and see if I stumble across more info like I occasionally do.

a lot of stuff was made, used once and tossed. No pockets and lots of material and time on you hands.
You must log in or register to reply here.

Eyeballed this worked flint while detecting

NO POLITICS IN THE ARTIFACT FORUMS!