I was looking for something in the basement and came across this bowl I picked up a while back. I reminds me of the type of designs you see on the outside of German beer steins, but the relief is on the inside of the bowl. It has a green glaze and beneath that it looks like stoneware or earthenware (light tan-white). The details stood out to me - I assume it's probably pressed with a mold? But still looks cool - especially the witches chasing that horse rider.

So is it something somebody made in a ceramics class? Or a treasure!

Any ideas on the style, age, type of ceramic I'm looking at. It has a small signature on the bottom that maybe say's PAD.

On a market-day, in the town of Ayr, a farmer from Carrick, and consequently whose way lay by the very gate of Alloway kirk-yard, in order to cross the River Doon, at the old bridge, which is almost two or three hundred yards farther on than the said old gate, had been detained by his business till by the time he reached Alloway it was the wizard hour, between night and morning.
Click to expand...

Though he was terrified with a blaze streaming from the kirk, yet as it is a well known fact, that to turn back on these occasions is running by far the greatest risk of mischief, he prudently advanced on his road. When he had reached the gate of the kirk-yard, he was surprised and entertained, thorough the ribs and arches of an old gothic window which still faces the highway, to see a dance of witches merrily footing it round their old sooty black-guard master, who was keeping them all alive with the power of his bagpipe. The farmer stopping his horse to observe them a little, could plainly desern the faces of many old women of his acquaintance and neighbourhood. How the gentleman was dressed, tradition does not say; but the ladies were all in their smocks; and one of them happening unluckily to have a smock which was considerably too short to answer all the purpose of that piece of dress, our farmer was so tickled that he involuntarily burst out, with a loud laugh, 'Weel luppen, Maggy wi' the short sark!' and recollecting himself, instantly spurred his horse to the top of his speed. I need not mention the universally known fact, that no diabolical power can pursue you beyond the middle of a running stream. Lucky it was for the poor farmer that the river Doon was so near, for notwithstanding the speed of his horse, which was a good one, against he reached the middle of the arch of the bridge and consequently the middle of the stream, the pursuing, vengeful hags were so close at his heels, that one of them actually sprung to seize him: but it was too late; nothing was on her side of the stream but the horse's tail, which immediately gave way to her infernal grip, as if blasted by a stroke of lightning; but the farmer was beyond her reach. However, the unsightly, tailless condition of the vigorous steed was to the last hours of the noble creature's life, an awful warning to the Carrick farmers, not to stay too late in Ayr markets.
Click to expand... 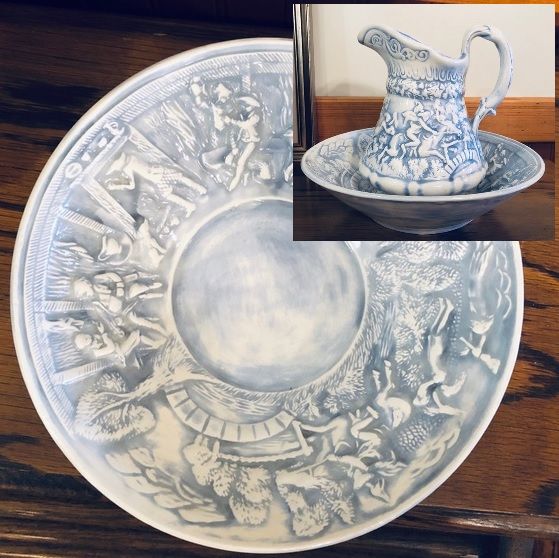 That's an awesome ID! Thank you so much. I love it. I'm definitely keeping it now. Amazing that I'm looking at this thing over here googling "story bowl" "high relief bowl" "german figural bowl" "PA Dutch green glazed bowl" etc etc etc and then you guys answer it in 5 minutes.

I can't figure out how to mark "solved" in the new format.
Upvote 1

It appears to be a relatively modern copy of the bowl from a jug and bowl set of the type that I think were first produced in stoneware by William Ridgway (& Co) of Stoke on Trent, England between about 1835-1840.

I don't recognise the mark, but the design was widely copied.
Upvote 3
You must log in or register to reply here.