That's a pity, I was concentrating more on what it was about and how it wasn't lining up with a few things.

Well, then he can still get into it because as you see this raises more questions than answers about why someone thought the same treasure being searched for on Oak Island might be on Trinidade (Ilhabela was just a bad mistake).

freeman said:
That's a pity, I was concentrating more on what it was about and how it wasn't lining up with a few things.
Click to expand...

Discussion is allowed, but not the promotion of the book.
M

freeman said:
That's a pity, I was concentrating more on what it was about and how it wasn't lining up with a few things.

Well, then he can still get into it because as you see this raises more questions than answers about why someone thought the same treasure being searched for on Oak Island might be on Trinidade (Ilhabela was just a bad mistake).
Click to expand...

If you read the old conversations on this topic, I was talking to Kanacki and in the conversations there is a lot of very interesting information posted about this hidden treasure on Trindade Island, in the middle of the Atlantic Ocean.

I managed to locate the pirate captain Zulmiro, who came to hide in the south of Brazil 200 years ago, here in my city, Curitiba.

He was the last of the pirate captains who were part of a band along with a Spaniard named José Sancho and a Russian with a large scar on his face, due to a sword blow, which left him blind in one eye.

They nicknamed the Russian pirate Zarolho.

Zarolho died in India in 1850 and before he died he gave the treasure map to an English merchant captain. Go in search of Edward Frederick Knight's book "The Cruise of the Alerte" for details of the story.

This map was delivered to the British Royal Navy in 1894, which occupied the island of Trindade in search of the treasure, but due to the large landslide in the southwest bay, it was unable to unearth the treasure.

The treasure map was delivered by the Marnha Real Inglesa to the Brazilian Navy in August 1896, when the United Kingdom returned the island of Trindade to Brazil.

A sergeant in the Brazilian Navy leaked the treasure map to a newspaper in the state of Rio de Janeiro in 1940 (World War II on fire).

The Map has an outline similar to the island of Trindade and has the word TREASURE exactly in the southwest bay, where the land collapsed.

This is the world's only pirate treasure map. 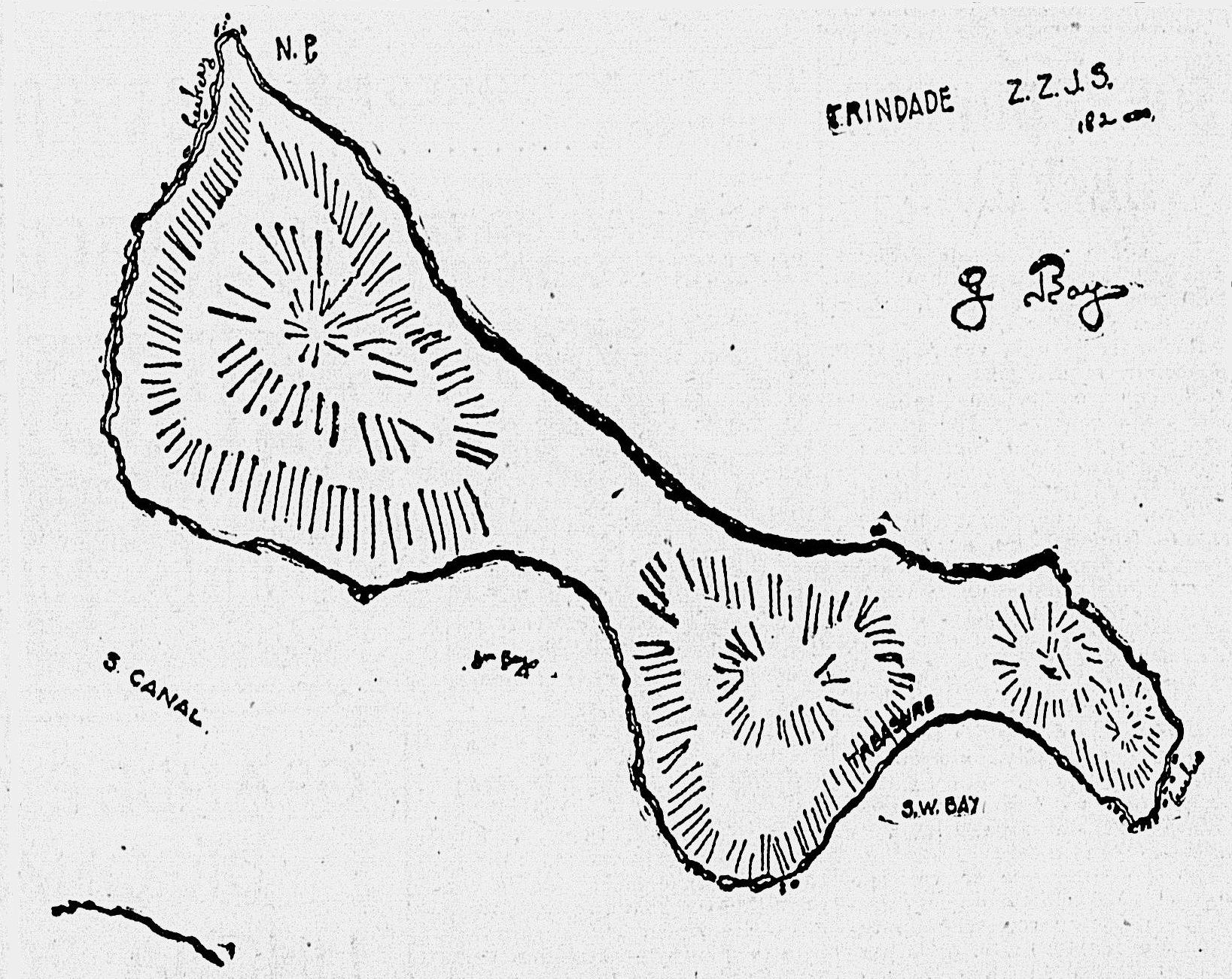 The pirate Zulmiro wrote a script on how to find the same treasure hidden on the island of Trindade, but Zulmiro and José Sancho tricked the Russian pirate Zarolho.

They had another secret hideout in the interior of the island, called A BURRA, the safe in Spanish.

The script was delivered in 1880 here in the city of Curitiba to an English immigrant named EDWARD YOUNG, and was leaked in the newspaper in 1939 by Edwrad's nephew.

Read the words that the British pirate Zulmiro wrote:

The treasure is hidden on an island named Trinidad, 648 miles off the coast of Brazil, in two different locations: the first one has gold, in powder and in bars, currencies from different countries, as well as valuable gems. This deposit’s worth may be estimated at five million pounds. The other deposit, despite being larger, is not as valuable, consisting of works of art in gold and silver, as well as sixty-three solid 6x2x4” silver bars, all of which where the spoils of many years of piracy.

The richest deposit is close to the waterfall. On the waterfall’s left side, three feet away from the large rock, the second rock is located at a 32° angle on the southwest side. There is a closed cave, which may be easily opened, inside which there are nineteen very valuable parcels in different sizes.

The other deposit is located on the south bay, at the easternmost point of the island, north of the Sugar Loaf, below the most centralized rock among the existing five.

The waterfall is located on the south side of the island, approximately 2.5 miles from the westernmost area of the island, at a short distance from the beach. It is easy to find it, as it is located below a depression in the mountain chain that makes up the landscape’s background, opposite to the best location to drop anchor, despite being exposed to all winds coming from there.

At the southernmost bay, a schooner finds safe docks, even close to the beach, under any weather, and it may, with a little work and some expertise, dock its vessels. At this location, there is a channel, close to the Sugar Loaf, which is different from another rocky peak that runs between it and the two stone islands next to the Sugar Loaf.

Five large rocks mark the treasure spot, above the grotto’s entrance, which is located at 5 degrees and 30 minutes northwest of the Sugar Loaf. When the island is seen from the south, a great depression on the mountain chain stands out and, at the stream mouth, a vessel may be safety docked.

The other deposit, whose hideout is located inside the grotto, consists of three large rooms cut in hard soil and crossing the grotto; towards 5 degrees and 30 minutes northwest, and three yards there are five large rocks, the center one of which is placed over the other four, forming a three-sided room. The entrance is on the west side and the parcels, all oversized, are hidden in this barn, stacked in a pile, inside barrels and drums, boxes and trunks, which fill the entire room.

Its artistic value is immeasurable, and its intrinsic value is approximately three million pounds. The round can holds documents of deposits that are valuable only for their legitimate owners, and they currently may only be useful to the Bank of England.

The treasure cannot be found without this description.

bobinsd said:
The description includes a waterfall....but the island is supposed to be waterless!
Wrong island?
Click to expand...

Trindade Island is one of the few oceanic islands that have natural water sources.

See this drawing of the Waterfall that I took from the book of the English expedition of 1889, " The Cruise of the Alerte". 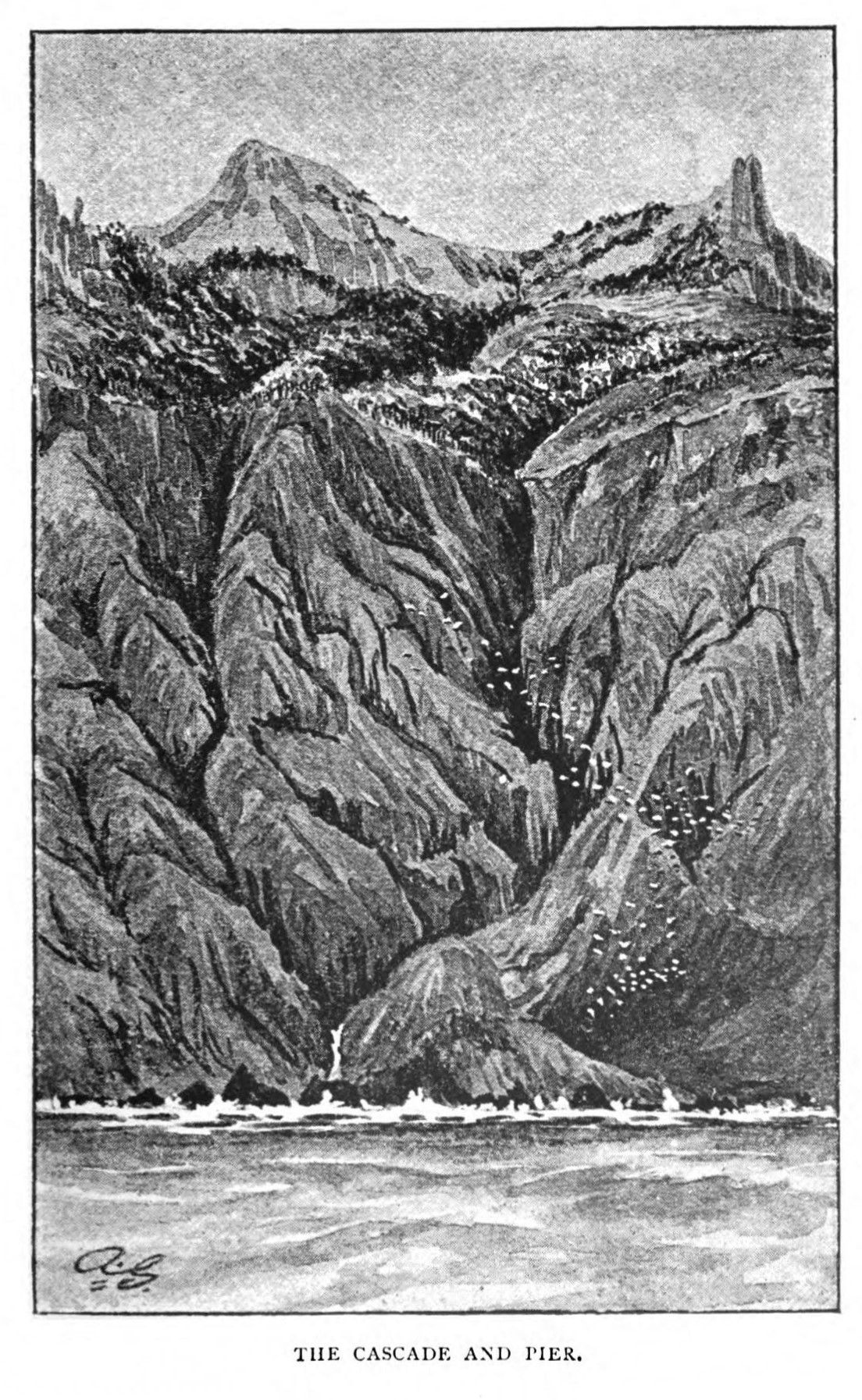 Look at the map of this expedition, in the southern part where the waterfall is, including the yacht Alerte anchored in front of the waterfall. 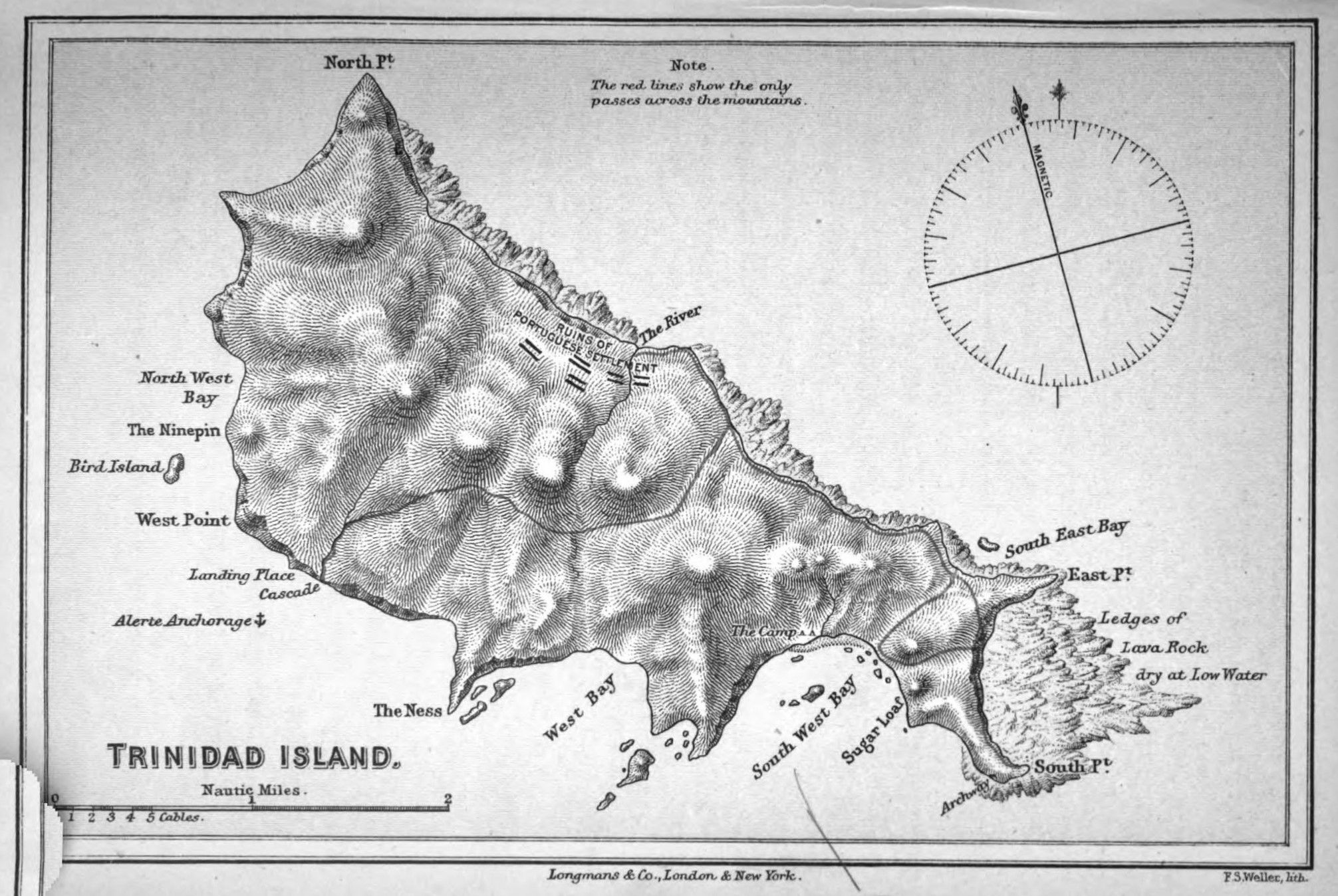 Please give us updated on our progress. We would be very interested if you discover something in the British archives.

Look how amazing what just arrived.

A sergeant in the Brazilian navy got in touch a few weeks ago.

He said that he saw reports on the internet about my research on the pirate Zulmiro and the treasure on Trindade Island.

He said that in 2004 some sailors were at the navy's oceanographic post on Trindade Island and one of them took a detector device.

He passed the detector stealthily, scouring the interior of the island, without the island's navy commander knowing.

he found some broken jewelry with gemstones encrusted, he brought those pieces, dismantled the stones, sold the gold and some stones to other friends.

This Marine sergeant who got in touch bought some of the gems and kept them.

They didn't know about the story of the treasure until he saw the report on the internet and that's why he got in touch.

He sent me the gemstones as a gift, look how amazing this is: 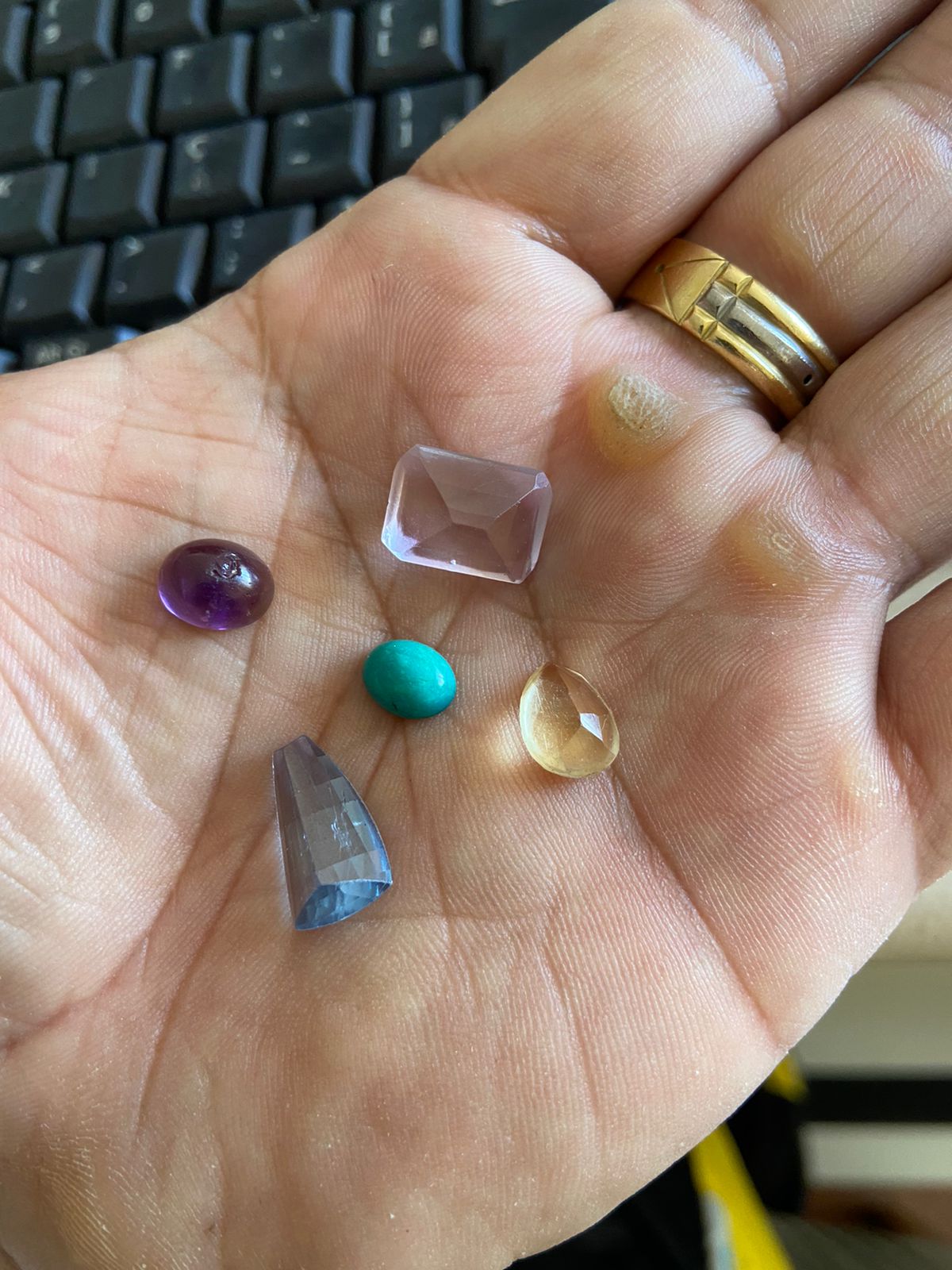 I took it to a goldsmith to see about the stones and their antiquity.

Blue is a Blue Topaz

The largest is a Rose Quartz

The small green is a turquoise

Yellow is a Citrine

Purple is an Amethyst

And they were encrusted in a jewel.

They are part of the pirate treasure hidden on Trindade Island.

The Mariner who found the gems commented that digging deeper would find more. 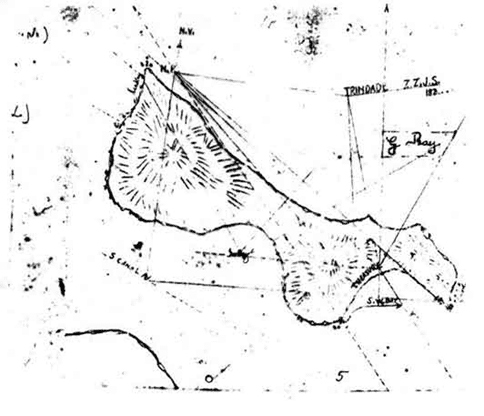 Poderiam me Ajudar?
You must log in or register to reply here.

Bryan Island in the Missouri River