Any help or opinion greatly appreciated....thanks in advance
Rocky
(reverting to lurking mode)
Click to expand...

A double hoyo that is a find. Hoyos always lead to something. Your hoyo itself may have a hidden symbol in its shape. You may want to walk in the direction the hoyo tells you looking for the same symbol, such as a bird or moon. Between you and the hoyo you will find another hoyo pointing at the same symbol. You will want to search the area closely looking for man made rock or a hiding place. This really is a lousy explanation, but I dont know how else to explain it. The rock with the hoyo may contain other signs. The picture may be the wrong side to be looking at. The side in which you see sky in is my guess. Looks like your a trail for sure.
P 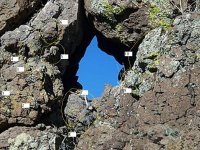 Bonuntr. This is what I see.

It looks exciting. have fun

Pinwheel
Ps. Some other symbols too. A forked trail on bigger owl just to the lower right of numbers. others also
Last edited: Feb 11, 2014
P 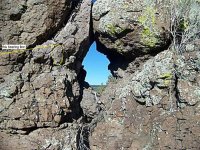 bonuntr: been looking some more. In the yellow circle may be a shaft. and a nest with 2 eggs in it. This is just my best guess. Your site has two cashes, one smaller than the other. The yellow line may be your line out. At some point your trail will fork. One will go 350 deg. the other 140 or 145 deg. I think both trails are either dangerous or death trapped. I am only guessing and most of the time i am wrong. Please come out of Lurking and tell us what you think now.

I actually stumbled on to this hoyo while following a different trail. I truly am at a loss to point it to anything I am working now. I know that it is man made, I haven't as of yet shown pics of the other side, (I havent taken them yet) Although, I do have pics of an very unusual monument that was within yards of the hoyo. The trouble is, I think they were made at different times. I will post the monument photos tonight and see what ya'll think....Thanks again
Rock
B

The next two replies are photos of the same monument, just different views. I believe there is a lot going on here. The lichenometry dating implies that the monument is between 175 and 300 years, (depending on which lichenometrist you hold belief in). As I am not a student of lichenometry, I cannot say for sure. The second post which I am putting up has an edge of one of the stones in the monument highlighted. The yellow line is where the stone has been rounded to a gentle curve, down to a point that whoever done it has then flattened the stone. The black lines highlight an area that shows how the rock was purposefully and very carefully carved into rounded areas. One of the most interesting monument stones I have ever personally discovered. (In later posts I will show a miniature death trap monument, that I believe was to show how the real death trap is constructed...If I just could just find it....oh well, that's for later posts if anyone is interested) 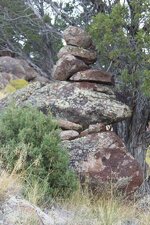 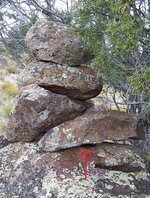 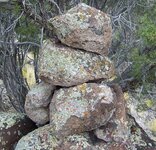 NOTE: The red arrow points out the rock that has been carved
B

These are two photos of the same monument, just different views.... 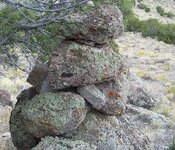 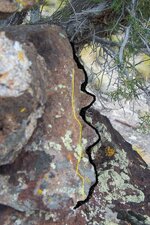 Note that the YELLOW LINE is where they have smoothed and rounded the original stone down to flatten it. The BLACK SHADING outlines the gentle curves that are purposefully carved in to the stone.

THANK YOU FOR ANY HELP! This monument is driving me crazy!!!
Rock

Well the carne is mexican, must be something they were working or a good camp nearby. Your on a main trail I suspect. You have a pointer inside the one hoyo. I have seen hoyo's point the trail out also, dont be too discouraged.
P

Bonuntr. You have several symbols to consider there. Many Facts to consider as well. If this bird is the last marker you found and the hoyo is fairly close, it looks like it could be two different trails. One later than the other, that could be a tough one to figure out.

Back to the Bird Carin. It looks like it is facing left with the eye closed. That could mean that what you are looking for is near by. I would look in the direction the birds beak is pointing. Probably partially buried or may underground all to geather. That may be your direction and you just need to find the distance. That will probably just be a map if you find it.

When I seen the yellow mark and the shadow that was made, The first thing i thought is, It is topographical. Could be a canyon or stream. It would be awfully jagged for a ridge line. May be you could measure it like you do a snake.

I hope you get back to that hoyo soon. I would not be able to sleep, thinking about those two eggs. Best of Luck

Is the Real or photo shop


If this real. You think it is Eve in the garden . The Devil is her a small boy or priest, snake head looking ate you on the left in the back. There is some more stuff to. Butt if it is photo shop it is fun to look at.

If I remember correctly, that tree was located in a European country....maybe England. 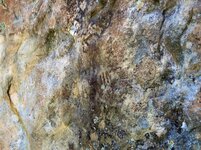 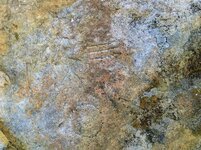 hang on maybe i can get someone to help you .
try this Mystery Glyphs - Images


im not sure cause i cant make them out very well , give me a second , to make some calls

Marmentman, Are these in South West Colorado?

ooops sorry i thought maybe they were unknown . last time i checked there were 26 0r 27 sites in the western US with similar writing . that dragon looking thing is way kewl .

Here's a link with a pic of the entire panel.

Marmentman said:
View attachment 948832 yes these are in durango and I am not with anyone doing research on this.
Click to expand...

hmmm seems like this came up once long ago on a distant forum , i was interested on how close these were to that mummy carving that i think is in Durango ? is that right ?
BTW i did not post your pictures , just the link.///bob

I am sorry if I offended you, I can take it off if you want me too. I believe the mummy thy found was in the next canyon over, couple miles as the crow flies.

no you did not offend me . your pictures showed up on the other forum , i was just saying i did not post them there .i am trying to remember , but i think the mummy thing came up one time and i asked if there were any of those mystery glyphs near it . at the time i dont think anyone had pictures of the panel , but i think its awesome ! heck i'm still working on the first panel i was shown .Terry Carter has been chasing those things all over the western US , he is a pretty good guy in my book . i will have to get back to this later got to take the wife on a date .

ARazorBack2 said:
Here's a link with a pic of the entire panel.

We do not allow links to other forums...


American by birth, Patriot by choice.

I would rather die standing on my two feet defending our Constitution than live a lifetime on my knees......
You must log in or register to reply here.

A Couple of Pictures Submitted for your Opinions