Found this along with the corkscrew listed in another post... The only markings are on the back "silveroid"
Need help on pattern and age and maker please. It is 6 inches long..

Good try Michelle, I had looked at souvenir spoons. I think its a very old table ware pattern, but I have no clue.
The only writing on it is "silveriod" Then just some type of flower...I don't see it under any of the Silver Plate manufacturers. I really need to find out more about it..Thanks!
DG

"Silveroid" is one of the generic trade names (Silverite, Silverine, et al.) for nickel silver or German silver— i.e., a non-silver, white metal alloy. This mark is often seen on watch cases as well as flatware. However, I don't believe that it has been ascribed to any particular maker. "National Silveroid" is a British mark. The similar "Silveroin" was a mark of the Bristol Mfg. Co. of Attleboro, MA. A "Silveroid" fork with an ornate floral pattern, front and back, is listed on eBay, but the seller seems to have little information about its age and origin: http://cgi.ebay.com/Small-Silveroid-Dinner-Fork_W0QQitemZ7338284604
Upvote 0

Angelo said:
PBK you beat me by one minute. I'll try moving faster next time.
Tony
Click to expand...

No need to hurry, Tony! Probably wouldn't happen again in another millennium. Most of the time I move about as swiftly as a guppy in aspic.

Good hunting, but I still cant pin down a age range. The seller says perhaps CW, but thats a guess. I do believe that is a match for the spoon.. At least we know there is another like it. Thanks guys!!!!
DG

I think it's probably c. 1890-1910. There was a boom in cheap silverplate and nickel-silver tableware at that time. The pattern looks as if it might be of the period, too. In addition to Silveroid, Silverite, Silverine, Silveroin, and German silver, there were a lot of other exotic names: Burmaroid, Argenline, and all of the following with the word "Silver" after— Aluminum, Nevada, Montana, Japanese, Indian, Panama, Brazilian, Australian, Norwegian. Many of these were made by the firm of Daniel & Arter (a.k.a. Globe Nevada Silver Works) of Birmingham, England.
Upvote 0

Angelo said:
Well...Just to be on the safe side, by me being older than you, I need about a 3 day handicap.

If I told you about all my aches and pains and working the keyboard with a pencil in my mouth perhaps, you should be kind and give me a week's head start.

I found this reference:

An alloy was developed specifically to meet the needs of the American pocket watch case that answer the question of durably and affordability. This combination of 45% nickel, 54% copper and 1% manganese was called silveroid, silverore, silverode or silverine. It was easy to polish, very hard and looked just like coin silver.

Hi DG! I was searching online to see if I could identify four forks and four matching knives that I have. They are very old, have the name Silveroid on the back of the forks, and the knives have the name Standard on the back. They are EXACTLY the same as the spoon you posted in 2006!!! Did you find anything out about their origin?
Upvote 0

I just found a spoon marked "Silveroid", with flowered design the full length of the handle on both sides. Found it at an old stage station (the original location of the town of Arco Idaho). That spot was also a watering spot for the Jeffery/Goodale cutoff of the Oregon Trail. One source I located said that utensil dates to about 1881, which would fit fairly well with where it was located. The spoon was covered completely in rust. I used my electrolytic cleaner to clean it up. It does stick to a magnet, but has some very shiny areas, like plating of some kind.
Jim 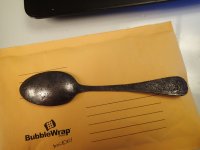 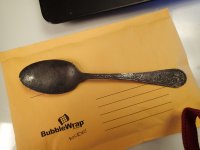 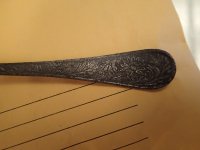 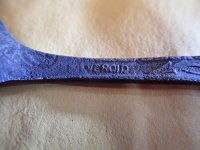