https://photos.google.com/share/AF1...?key=ZnVYMlVXdmpwWlRtemIya3JGWllicWJYSE9LOEt3
Discovered with my friend's old family stuff. Anyone have knowledge of Egyptian antiquities? The original owner was a Capt. for the U.S.Army in WW1.

Any input would be appreciated.... are these things rare? Valuable? 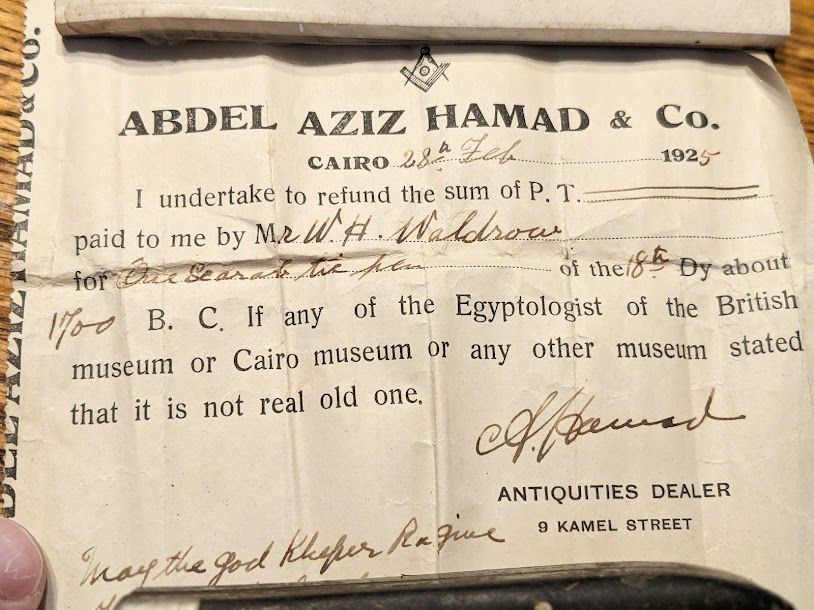 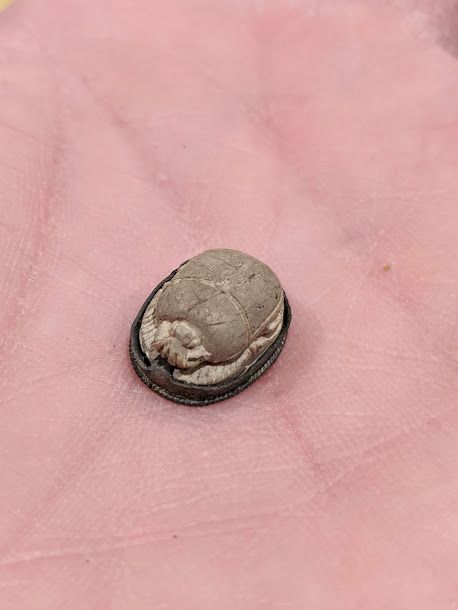 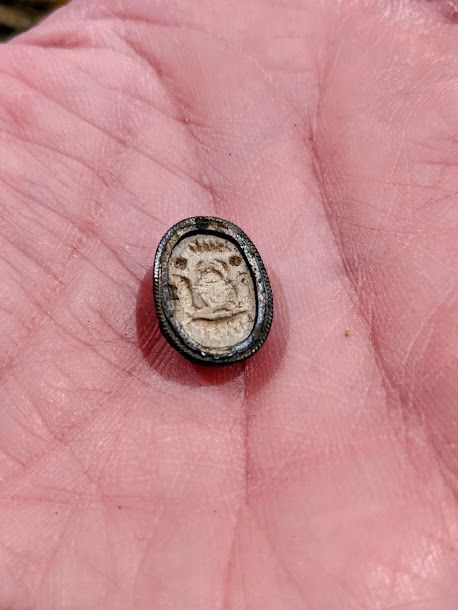 jcono said:
https://photos.google.com/share/AF1...?key=ZnVYMlVXdmpwWlRtemIya3JGWllicWJYSE9LOEt3
Discovered with my friend's old family stuff. Anyone have knowledge of Egyptian antiquities? The original owner was a Capt. for the U.S.Army in WW1.

Any input would be appreciated.... are these things rare? Valuable?

My friend,I have no knowledge of these things to help you out,but I think that,s way cool! Both the document and the Scarab! Super cool!

no idea, but keep the document with the scarab. They are inseperable

Very interesting. It’s not possible to say whether that’s an authentic Dynastic antiquity; or old but not as old as claimed; or a modern fake from your picture alone. What can be said is that the claim for it to be “18th Dynasty, about 1700 BC” is wrong.

Today, we regard the 18th Dynasty (of the New Kingdom) as circa 1550 BC – 1292 BC. Would an antiquities dealer have known that in 1925? Well, he should have. Anyone with an interest in Egyptian archaeology would, at that time, likely have been using the chronology published in 1906 by the American Egyptologist James Breasted. That chronology put the 18th Dynasty as spanning the years 1580 BC - 1350 BC. The year 1700 BC would have been regarded as in the Second Intermediate Period and likely 14th Dynasty.

There are some great pointers on "real or fake?" scarabs at the website below:
http://www.collector-antiquities.com/real-or-fake/fake-egyptian/fake-scarabs.html

The paperwork looks to be contemporary for 1925, although I can find no record of this particular dealer. It’s worth bearing in mind that this would be not long after Howard Carter’s November 1922 discovery of Tutankhamun’s tomb, after which there was a huge upsurge in tourist visits to Egypt and consequent peddling of ‘antiquities’ by people calling themselves ‘dealers’. Much of what was sold was either misrepresented as more ancient than was truly the case, or just plain fake. Claims for “18th Dynasty” were popular, since that was the time span which included Tutankhamun as Pharaoh. The guarantee looks impressive but getting your money back if the item proved to be not as claimed might not have been as straightforward as the paperwork suggests.

You would probably need to get a museum opinion on whether yours is genuine and, if so, how old it actually might be. Scarabs like this were produced over a very long timespan in Egypt.
Last edited: Apr 12, 2022
OP
J

Red-Coat, thank you for taking your time to provide such a detailed response!
I will relay this information to my friend. He lives in NC, and will probably try to find a knowledgeable person... maybe from one of the universities in his area? We will see. Again, thanks
You must log in or register to reply here.