I am posting this for a friend. It was found in VA, that's all I know besides the pictures. I assume the "56" is the back half of the year, 1856. Pretty cool little piece though.

Looks like maybe a gloved hand shaking another as part of the Livery.
Upvote 0
OP

CRUSADER said:
Looks like maybe a gloved hand shaking another as part of the Livery.
Click to expand...

That was my initial thought, but the angle of the hands is off and if those are fingers at the bottom, there are 6 of them and they are very disproportionate. I agree at least one of those is a hand but not sure if its holding something or shaking another hand??
Upvote 0
F

The angle that Virginia is engraved makes it look like it had a word in front of it. Maybe West Virginia.
Upvote 0

Reminds me of a wild turkey gold foil I found metal detecting, thought I hit it big, then saw the logo on it, lol.

The foil must have been the box or gift bag the wild turkey came in cause it was pretty thick and definitely metallic.

May be the same type thing?

Looks like a mermaid or siren in the picture, in an entrance?

With the shaking hands, maybe something to do with Odd Fellows??

My first thought was that it may have something to do with The Free Masons.

Interesting find. I keep coming back to it. This isn't much help, but some observations in case it helps somebody:

1. From the engraving/stamping on the back, it would appear to be not mounted on something (maybe a badge, necklace, or some other unmounted item).
2. If it's a handshake in the image, the left "person" is using a two handed shake. That said, they have an odd hand in that it looks like their right hand has more than four fingers. The left hand (of the left hands) is for sure a hand.
3. There's an NC or NG on a ribbon above the hands.
4. From the kerning (spacing between letters/numbers), I would have thought we could see part of the 8 if it was 1856. There's a little circle (almost degree mark) high left of the #5, but that's not part of a number 8 (could be part of the image above it). It's not super rare to separate numbers (like 18 56), but not really common either.
5. 1856 was an election year so it could be an election related item.
Upvote 0

Maybe an agreement or pact between North Carolina and Virginia, possibly another (could be three hands?) colony or state depending on date. the small O or 0 has me stumped unless the 56 refers to a border agreement but neither latitude or longitude fit unless a fraction maybe.
Upvote 0
OP

Thanks for all of the observations and guesses guys. He is going to head back to the site on Friday with hope to find the missing pieces.
Upvote 0

Seen a reference to a treaty between Virginia and the Catawbas and. Cherokees, 1756
Upvote 0

Interesting theory. The Seaboard Lodge No. 56 was established in 1868 and is located in Portsmouth, VA. This item was found, as the crow flies, only 20 miles from Portsmouth.
Upvote 0
OP

Kiros32 said:
Interesting theory. The Seaboard Lodge No. 56 was established in 1868 and is located in Portsmouth, VA. This item was found, as the crow flies, only 20 miles from Portsmouth.
Click to expand...

Update: Confirmed this was found just across the river, within a mile of Portsmouth.
Upvote 0

Kiros32 said:
That was my initial thought, but the angle of the hands is off and if those are fingers at the bottom, there are 6 of them and they are very disproportionate. I agree at least one of those is a hand but not sure if its holding something or shaking another hand??
Click to expand...

The first four fingers belong to the hand coming down from the top. The last two belong the horizontal hand.
Upvote 0
OP

This is extremely crude and disproportionate, but what do you think?

Interesting to note that the hand on the right appears to have ruffles on the sleeve. In looking at paintings and drawings this style would appear to be much more 1756-ish than 1856-ish.
Upvote 0 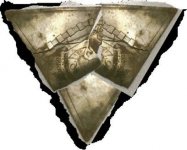 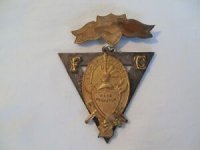 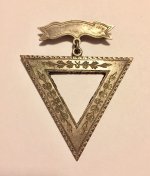 I received the following information from a member of Masonic Lodge No. 56.

"The rear appears to display the 47th Problem of Euclid. This was likely some form of a jewel that was worn, possible a coin but I don’t believe that’s as likely as the jewel. "

"In regard to the handshake...Masonry (blue lodge) has 3 degrees. They are Entered Apprentice, Fellowcraft, and Master Mason. Without seeing what knuckle the thumb is placed on, I can’t tell what degree it is but it looks to be the first knuckle. If that is the case it may have been a gift from a friend or family member when they were initiated into Masonry. "

"The arch in the image doesn’t have a direct or specific meaning based upon the shape or styling on the item. Many Masonic images have arches in them which ties back to the Operative Masons whereas Freemasons work within Speculative Masonry."

I think we can at least conclude that this is a Masonic piece, likely one of a kind.

J
HELP ME I.D. THIS FIND