What do you think about this iron axe relic?

I have been collecting militaria and anything old unusual relics for over 40 years. This came out of a collection of a WW2 soldier that served at the end of the war and spent a couple of years exploring Liberia and Africa. He didn't say what he thought it was but since he was in those areas he picked up some coins, jewelry and this forged iron piece. I have had this for over 20 years. I have his name rank, uniform and medals. I had this piece examined recently by a local blacksmith along with a saw knife that some of you are familiar with. He says it is forged and very unusual. I have been trying for years to find a similar item that looks like this and what it could be used for. It is quite heavy. It measures 2 5/8 by 2 1/2". It has a blade that is very sharp and rusted quite a bit in one area. Like it was used for cutting, shaping, engraving, skinning or even battle. It fits very nicely in palm for a good grip or maybe made to fit in a handle or pole for a weapon. I know it is small but could it be an old battle axe? I am posting some ideas even though it could just be a hunk of iron that was shaped for something else. It is quite obvious it is very old due to the pitting and wear. The patina has a shine that I cannot seem to wipe or scratch off. I have been steadily studying ancient Egypt weapons sites on the net. I had this on the forum many years ago and had used some of the forums experts to direct me in this area. Was iron discovered and used in ancient Egypt? All thoughts are welcome. Thanks in advance. Bill 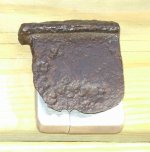 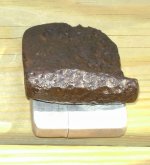 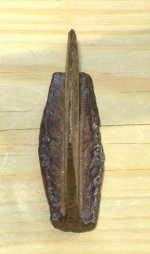 Unless the other has been broken off it only has one tang. You couldn't attach it a stick if you only had one. The base looks wider and heavier than the axe shown in the picture. I'm thinking it's a hot chisel. What blacksmiths used to cut of pieces of undesired metal. It was used when the iron was red hot so it really didn't need to be that hard. It could be the notches cut into it are a result of someone trying to cut cold metal with it.

That's a good guess Im going to follow this I want to see what it is .
Upvote 0
OP
O

I am going to re open this conversation, hoping I can come up with a logical description of what this is. It fits perfectly in hand palm. One edge has been worn away as seen in picture. Thanks again forum.
Upvote 0

This looks like half of a broken blacksmith-made axe head, I find a couple of these each year on old home sites.
After having had a second look at your pics, I'm now thinking it may be a wedge for splitting fire wood.

The poll is highly battered. As if it saw much use.
A handle could be a split steamed and folded. Resting the existing tanged edge on the fold before lashing. (?)

It's profile (besides that huge chunky poll and only having one tanged side/edge) fits certain old Axes.
It's size hints of a domestic use vs warfare. Though it's light and portable as a personal tool too. (?)

Could it work for food prep? Sure.
As it could for multiple uses an edged tool can be...

Interesting piece. Very foreign to this viewer. Which makes it more interesting. 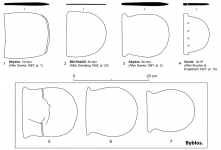 Thank all of you for your help. I did go to releventchair for posting a source to help identify this relic. I will be going further with this topic.
Upvote 0
OP
O

I had made a handle for this. From some help I had researched an idea as to how this iron relic could have been mounted according to the way it was made. I was told to get it looked at by an expert on meteorite. I know it is just an idea. It is worth the time I had put into this thing for my curiosity.