ETH is the safest . Other alt coins can outperform in short term. But ETH can really go to moon. 20k in 2 years, 60k in 5. Don't bet everything you have. But 10-25% can make you rich outside other traditional investments. Crypto is still in it's infancy. This is the time that makes retail millionaires that hold for 2-5 years. Retail buying (which is you and I, or actually many younger investors) ) is making crypto what it is, and for the first time ever, institutional buying is following retail money and actually a large step behind it. When institutions really steps up, it's too late for the big gains, which a lot has already occurred, but much more to come over the next year or so. The blockchain is going to be the future, which is ETH.
Last edited: May 12, 2021

Just get ready to stomach 20-30% up and downs. It's very volatile and will continue to be for a while. Just hold and don't look at it day to day. If you need to sell , sell at a high , cause it will get there.
J

One of my best buys has been Eth. Glad I didnt sit on the sidelines and watch everyone else making money haha.
Anyone can buy 5 or 10 dollars of cryptos and diversify such a small amount, there is no excuse to miss out on this for anyone.

Well, flash crash and staying down, I guess it's in or out. I'm in. Not that I'm all in, but sticking with what I have already put in. F -jpmorgan, some banks don't want crytpo to succeed, it's taking away their monthly revenue. If yur money goes to crypto, they don't have it to invest in their whacked out places. It will be a battle..

Saw something interesting late last night/early morning. Was watching yahoo chat boards, on various cryptos, shaking in my boots from the current dive wondering if I'm holding the bag for the next year..... Someone from Dubai starting posting on the ETH boards that they were going to push it up. ETH was sitting at about 2100, just a bump from the bottom of 1800ish. The guy called all the numbers of where it would go next 12 hours, first bump up to 2300, then push thru 2350, and next day (today)on to 2500. From there 2800-3000 over next few days, then a few dips,then going to ath's again by July 4th. Interesting. Saw same guy post a month or so ago on the btc boards same time of night, said they were buying it up, pushed btc up 2000 after it had dipped a little. Called the numbers again. Americans seem to think the crypto market is controlled by Americans, but no, it's a world market, there is way bigger money out the than you think. The oil barons for one. Goldman sacks has an office in Dubai. No doubt they are involved, because they suddenly came out with all this bullish sentiment today on crypto. Follow the big money is what they always say. Dubai is said to run out of oil production in the next 5 years. Looks like they have been doing crypto for a replacement.
J

Yeah eth up almost 30 percent today. Very volatile and not for everyone haha. Gold is much more stable.
As for me I dont mind it. It's a long term hodl so these moves dont mean much in the grand scheme of things.
Its obvious where everything is going with the trillions printed. Much of it going into cryptos.

Heh, they are doing it again right now. He's posting on yahoo finance ETH-usd boards says taking it to 2800 then trying to push to 3000. Then 3500 possibly by tomorrow or Wednesday. It just spiked a 100 bucks since he posted it 30 mins ago. Moving it slowly, probably taking out sell orders a few at a time, getting as cheap as they can as they move it up. Obviously using a crypto buying algorithm program.

Watched it for a couple hours last night, they got met with a selling algo , it was dumping crypto what basically looked like out of thin air at the bid to meet the buying. It went up a good chunk, but eventually lost ground a couple hundred. Probably iou type trading where the exchange or someone associated with pushes the price down because of unlimited non-existant iou shares/coins until they have to cover and deliver them. Then they just buy it at lower price, deliver, and pocket the difference. Same thing as shorting, but slightly illegal. Can get trapped big time doing that. Anyways , same buying tonight and it's moving up well so far, up to 2895, looks hopeful for a quik recovery.

I went in all in on AMC and Dogecoin at a low enough price I just sit back and smile at my stupid choices...

They call it all decentralized, which it may be to a point, However the multiple exchanges it's traded on are unregulated and quite unethical in the trading practices. They pull some shady stuff when the regular stock markets close.

Bitcoin is dead....Gold is eternal 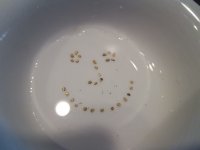 Odd tidbit btc has been "declared dead" some 400 times since inception. Maybe one of these times they will get it right.
One thing I don't like is dealing with these exchanges. Been trying to validate a corporate account on coinbase for 5 weeks. You can't call anyone or talk to a real person , or even send an email that falls into the right category of choices they give you for support issues. It's ridiculous, so I just put money into a regular corporate stock trading account and just bought a bunch of ETHE grayscale ethereum trust. Which is otc , meaning not really regulated, again. Lots of risk.
J

Most of the experts have been wrong over and over. Like usual, do the opposite of what they say and you'll do great.
Lots of FUD and fear being spread but none of them have been right so far. Weve heard it all before from the losers and they wont be right this time either.
Last edited: Jun 11, 2021
J

I got a nice raise and bonus at work so a little more cryptos on the menu.
We cant find any employees and are down to 6 on the crew now. The boss is crapping himself and is giving a $1000 signing bonus and has doubled the starting wage.
It pays to stick it out sometimes!
J

When is the bottom!?
J

Seems like eth is leading more than btc. Eth bounced hard right off the 200.
J

Now it bounced off the 180 and btc is still sunk under doing nothing.
After how eth performed in the last run.....leaps and bounds better than the others, wouldn't surprise me if it leads the way now.
Is btc the supercoin of cryptos?
You must log in or register to reply here.