What have I found in the middle of the river in Arkansas? 3 in diameter, weight of 3.5 lbs, imperfectly spherical, made of stone, someone help please

First of all , welcome to TreasureNet ! Many fellow treasure hunters here have varying areas of expertise & I'm sure someone will zero in on the origin of your find.
I'm no expert on old round stones, but your stone could be an old game ball from some kind of game like Bocce or something like that. It could have been bounced around in the river for many years & given its current size & condition.
Could be an artifact from some kind of a Native American game. It might require some more searching & digging on your part. But for now, here's a few links to give you some sort of idea on what to search for. CHEERS !!! & Happy Hunting !!

This item is unavailable - Etsy 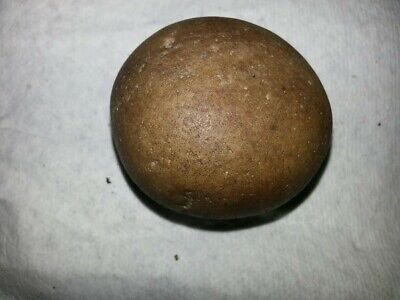 Native American game ball would have been my first guess too.... until I looked at your pictures more closely. I can see groups of perfectly parallel lines which also criss-cross one another in some areas (click to enlarge the pics):

I would be sure that this has been progressively hand shaped using a lathe, and that's not how a game ball would have been produced. Stone cannon shot does exist (and would have been lathe-turned but checked for a relativley uniform diameter using a ball-parser) but I think this is much more likely a milling ball. Those don't need to be perfectly spherical. They were used in a large rotating drum for grinding irregular granular materials into more uniform powders or particulates (ores for smelting, clay for pottery or tobacco pipes, pigments for paint production, gunpowder components and a whole host of other uses).

Early ones were made from hardstones before Iron and steel became the norm... but those aren't suitable for all applications and high-tech ceramics (often mixed with crushed quartz) generally replaced stone for many uses since they can be easily produced by moulding.
Last edited: Sep 22, 2022

Mill stone is my first thought.

With the lines Red-Coat shows I would also think milling ball.
K

Them be mill stone. I sceen a huded of them by my ol pappys mill. been their most of 200 yeers.cool find, dust sposion mite half through it down the river

Seems like a stone milling ball is the correct consensus. It wouldn't surprise me if there are more of them in that small area of the river, like "King Canslaw" says.

I read in some book on mining history of the Rocky Mountains about early ball mills first being used and the mill balls were produced in France from some type of hard stone. I'm curious to know where in the Arkansas River did you find this along it's 1460 mile length? I at one time worked at a mine around the very location at the source of the Arkansas River, high in the Rocky Mountains. The mill balls at the mine where made of steel and they came in by open train cars by the thousands
Last edited: Sep 23, 2022

King Canslaw said:
Them be mill stone. I sceen a huded of them by my ol pappys mill. been their most of 200 yeers.cool find, dust sposion mite half through it down the river