What is the most valuable thing you have ever found?

Don... you found your wife while detecting ?

What metal was she wearing that gave off the signal ? :P

My wife! Sorry gang - lost control on this one!

ScubaDetector said:
You are absolutely right. However, it can make living a lot easier and give you a peace of mind which plays an important role in being on this earth.
Click to expand...

Money may not buy happiness,but it can buy you a lesser grade of misery in a better part of town!
R

When silver was about 50 bucks an ounce, I sold 800 common(roosies and late mercs) dimes that I found detecting for over 2000 bucks. I don't detect for profit, but there can be a nice payday when you luck upon a gold ring. I usually find two or three of these per year, but it is hard to pry them off my wife's finger to sell them. A small price to pay for her support of my detecting ventures.
A

ScubaDetector said:
What are you talking about? When it comes to the IRS all we find is pesky IRS knows how to open the cann.

AARC said:
Don... you found your wife while detecting ?

What metal was she wearing that gave off the signal ? :P
Click to expand...

How deep was she? Perhaps it was the tooth braces that gave her away.

The ashes of a kid who died at 19, in a thumb-print locket his brother wore around his neck. His brother lost it on the beach; it had broken free of his chain while playing football. He spent hours combing the beach trying to find it, and after a few weeks he figured it was washed away.

My wife put the locket on Facebook (it was inscribed on the back) and somehow somebody who know the guy saw it. It got shared LOTS of times, so that helped too. Plus the guy had his own FB post out there asking if anyone had found it, and that got shared too.

The guy was sweet as hell, and his family super nice. They were thrilled to get their family member back, and I was thrilled to deliver him.

Here's some pics for the curious: 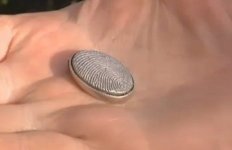 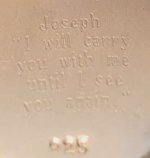 Nice, that,ll come back to you in a good way some day. 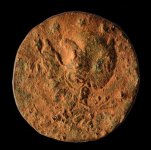 This Confederate Staff Officers flat button is the most valuable monetary wise. It was found at Harts Ford, at a house site where J.E.B. Stuart and his staff paid a visit to the land owner. It was found right at the front door. I was offered $2,500 by a Civil War dealer, even in its uncleaned, flattened condition.

This is the most valuable in terms of provenance. I found this Springfield Musket at the site of my 4th Great uncles house, Daniel Trautman. His son was in the Civil War, Emanuel Trautman, and this was his musket. He served in the 50th Pa Vol. infantry for a year, but that was the year of the action packed Overland Campaign. He fought in every Major Army of the Potomac battle of 1864, and even got wounded in the face at Petersburg. His gun was tossed in the trash pit area of the Trautman farm. Daniel was murdered in 1880, and Emanuel was living in another county at the time. We assume that the musket was a gift to his father, but was thrown out by his mother in the late 1890s when the farm was abandoned. The lockplate is still to be found, but I think I know where to look.

Given the choice between a valuable cache or this...

MY Best or GREATEST FIND
2