🔎 UNIDENTIFIED What is this old cutlery for?

Based on my research of the maker’s mark, it’s from about 1850 England. I just don’t know what the heck it was used for.

Customx_12 said:
Based on my research of the maker’s mark, it’s from about 1850 England. I just don’t know what the heck it was used for.
Click to expand...

Oh wow, you might be right! I didn’t even know there was such a thing until you suggested it. I’ll wait to see if others know for certain but I definitely think you may be right.
Upvote 0
S

No credit to me. I did a search for "knife with bristles on handle" and got a lot of pics of mushroom knives.
Upvote 2

I think mushroom knife is probably the SOLVE but it also looks like a chip carving knife, but they don't have bristles on the end.
Upvote 1

Nice unusual knife, I would have picked that one up in a shop if I'll spotted it. Not seen one.
Upvote 1

I'd be interested to know the history on these guys.

I found a couple websites about the history of the company but not many examples of their work being sold. I think there’s a butter knife on eBay for $75-100 and a guy asking $5,000 for a Bowie knife (crazy high). This being much rarer than a butter knife, I would guess is around $200 or so. The company moved to that factory in 1850 and looks like they stayed there for just a couple years so this is from between 1850-1852, I believe. Not much else on the company.

I would like to mark this as solved but I’m on my phone and can’t seem to find the button to do it. So if a mod wants to mark as solved, I’d appreciate it.

Thank you everyone!
Upvote 0

Yes, mushroom knife it is. The maker was John Walters & Co, originally founded by John Lolewell Walters at Burgess Street near the city centre of Sheffield and then at the Carver Street works, selling plated cutlery with German silver, pearl, and ivory handles. They advertised as “Manufacturers of Every Description of Table and Spring Cutlery”, but also traded as a steel and tool merchant. Between 1850-1852, Walters left Carver Street and moved into part of the Globe Works in the Neepsend suburb of Sheffield at Penistone Road which had been built in 1825 for Ibbotson Bros. (Ibbotson completely vacated the premises by 1862). The Walters company had heavily exploited transatlantic trade (notably for quality Bowie knives) but suffered a setback when American exports collapsed with the start of the Civil War.

John Kent Turner joined the business as a partner in 1861 along with Frank William Marriott, and Walters ultimately sold his business interests to them. In 1864, J. Walters & Co. sold its stock and entered bankruptcy proceedings. Walters’ name and trademarks were acquired by Unwin & Rogers (with whom Walters had close business and family links). They moved into the Globe Works in 1865 and continued to run using the Walters’ name until about 1899. 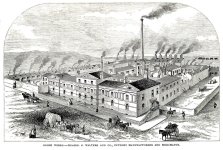 [Globe Works, from the Illustrated Guide to Sheffield, 1862]
Upvote 2

PS: Mushroom knives were one of many primitive close-combat personal defence weapons used in 1800s America. 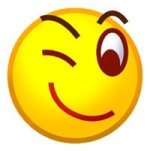 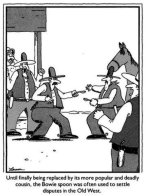