Can anyone help with what this could be. It is dated 1952 from Madrid and has a bunch of signatures

Most intriguing,i can,t help but I,d sure love to know.
Upvote 0

It looks like a memento given to a businessman, academic, or dignitary at the conclusion of their stay in Madrid. One could transcribe the text into google translate, if one has the time.
Upvote 0
I

Per Google Spanish to English translation the 1st paragraph appears below. Type the remaining paragraphs into the translator and you should get a general idea of what it is about.

Here is the rest and I?m still lost

He despises the cigarette by smoking a pipe with the calm gesture of the fisherman and he fishes as if it were a casual fluke, clients a porrillo that is a beauty, he dominates the idioms wonderfully, he takes advantage of every occasion, so it is easy for him to get an import permit his easy fluorescent science exhive and get a luminescent triumph because everything is praise among the people who visit his factory that calls elibe always carries a handkerchief as a flag that overflows white from his pocket and the hardest work makes it simple as if working he would have fun this is pepe de Cuban American who has a very Spanish surname that's why here they treat him like a brother and he walks proudly sunbathing
Upvote 0

"Herrera is a Spanish municipality located in the province of Seville, in Andalusia." From Wikipedia
Be careful with direct translation. There are phrases that have distinct meaning in any language. They are called colloquialisms.
Last edited: Sep 22, 2021
Upvote 0

GoldieLocks said:
"Herrera is a Spanish municipality located in the province of Seville, in Andalusia." From Wikipedia
Be careful with direct translation. There are phrases that have distinct meaning in any language. They are called colloquialisms.
Click to expand...

It clearly says "Madrid Feb 22, 1952" in the bottom right corner. Herrera is 300 miles south of Madrid. In any case, it says "HERRERoS '52" so it's probably the signature of someone with that surname, as the artist who produced the mocked-up 'certificate'.

It seems to be a tribute, mildly making fun of someone nicknamed "Pepe de Cubas" (presumably of Cuban descent, referred to an 'Americano') by his Spanish business colleagues. Note the reference to "the factory he calls Elibe" (with the word "ELIBE" in larger bold letters) so Pepe is probably the owner of that factory.

The word "ELIBE" was trademarked in Madrid in 1949 by a company operating as "Electronica Iberia, S.A., Elibe" so I guess that might be the company.
Last edited: Sep 23, 2021
Upvote 0

A bit more. "Electronica Iberia, S.A., Elibe" seems to have been a lighting company based in Madrid, so that ties in with the references to "ciencia fluorescente" and "triunfo luminescente".

Here’s one of their ads from 1952, promoting 'Elibe' fluorescent tubes: 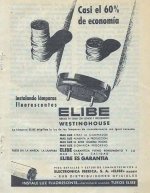 Hey all! Any Marvel experts?

Help with signature on guitar

Help with signatures on baseball