Three hour hunt in Baltimore this morning and dug three 19th century coins. This was a 'first' for me to find two large cents in the same day in the City. 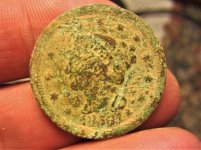 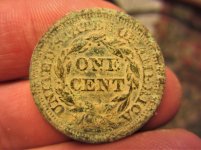 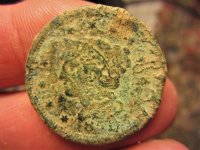 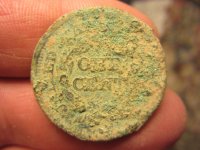 Both are a little 'toasty' but enough detail can be seen to place them both in the 1850s, in fact, I believe the first if 1856.

The other 'coin' had me 'scratching my head'. Never saw the 'seated' figure on a brass coin. 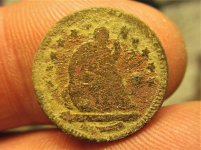 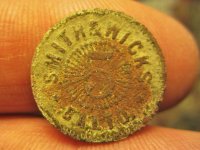 Got to tell you the better story from the morning. A man in his 30s stopped by the fence and asked me if I find anything 'old' in the park. He lives a block away from the park and showed me a coin he spotted recently in a dirt pile by some homes that are being renovated in his block.....a 1923 Peace dollar. He wants to get a detector since he has an interest in collecting coins. ...another great conversation from a hunt in the City!​
Upvote 42
OP

Thanks Trezurehunter. There was a piece of a square nail in the hole with the token. Glad I kept looking.
OP

Thanks Hawks88! The canning factory was at the old Baltimore inner harbor where the wharfs started. None of that remains today.
OP

Thanks Ed. May be heading back there early Friday. HH & GL.
OP

Thanks malenkai. I agree. There are so many targets here and many are shallow. Right now I'm passing up on most of the 22-27 (Equinox) signals. Would be interesting to see what a pulse induction unit could find here.
OP

Thanks ATW. I do find the token to be very unique with the use of seated liberty; it definitely puts a period date on the piece.
OP

Thanks Johncoho. My approach on Wednesday was to grid a two small areas. LCs were on same side of park but one on the north edge and the other on the south extreme. This park is not what it was 100 years ago. It has been completely re-purposed and re-contoured. Part of it has a school and rec center on it. Part of it had housing built on it in the 70s and since then the housing was demolished, leaving an empty plot of land. Many changes but some of the old targets remain.

Wow, nice going! That large cents and token are killer. Why not go hunt those house sites with your new friend? Good stuff!
OP

Nice job on the double LC day and the token is really unique! Congrats!!

Nice finds, sure is nice that you can hunt them old parks we can't hunt squat here in DC/NOVA!
OP

Thx BLK HOLE. There has been talk over the past several years of eliminating the permits, but so far the only action taken was to close a park to detecting. That was a sweet spot to detect.

McCDig said:
Thx BLK HOLE. There has been talk over the past several years of eliminating the permits, but so far the only action taken was to close a park to detecting. That was a sweet spot to detect.
Click to expand...

Was that the place the Hoover Boys called "Walmart"? I met up with 8Reale last year and got to hunt the one of the parks there, I didn't find much but had a blast.

Very cool toke. Hard to believe that guy can eyeball a silver dollar and I can't even find one in 30 years metal detecting!
OP

No. That 'Walmart' is closed. Can't detect there any longer, if I'm thinking of the correct spot.
8Reales is the real deal. He's a good detectorist.
OP

His name is Maurice and with that kind of skill, he definitely needs to detect.

Good finds!
You must log in or register to reply here.