Whos The Most Famous Person Youve Ever Met?

Mike Tyson, Rush Limbaugh, Max Baer, Reggie Jackson, Kenny Roberts, I caddied for Butch Baird senior golfer. That's about all I can remember. Oh yeah, does the Golden State Killer / East Area Rapist count? I was at the shop the day he bought the motorcycle they show in his driveway the day they arrested him and was giving him advice on what bike to buy. Glad I didn't steer him wrong.
Last edited: Jul 20, 2022 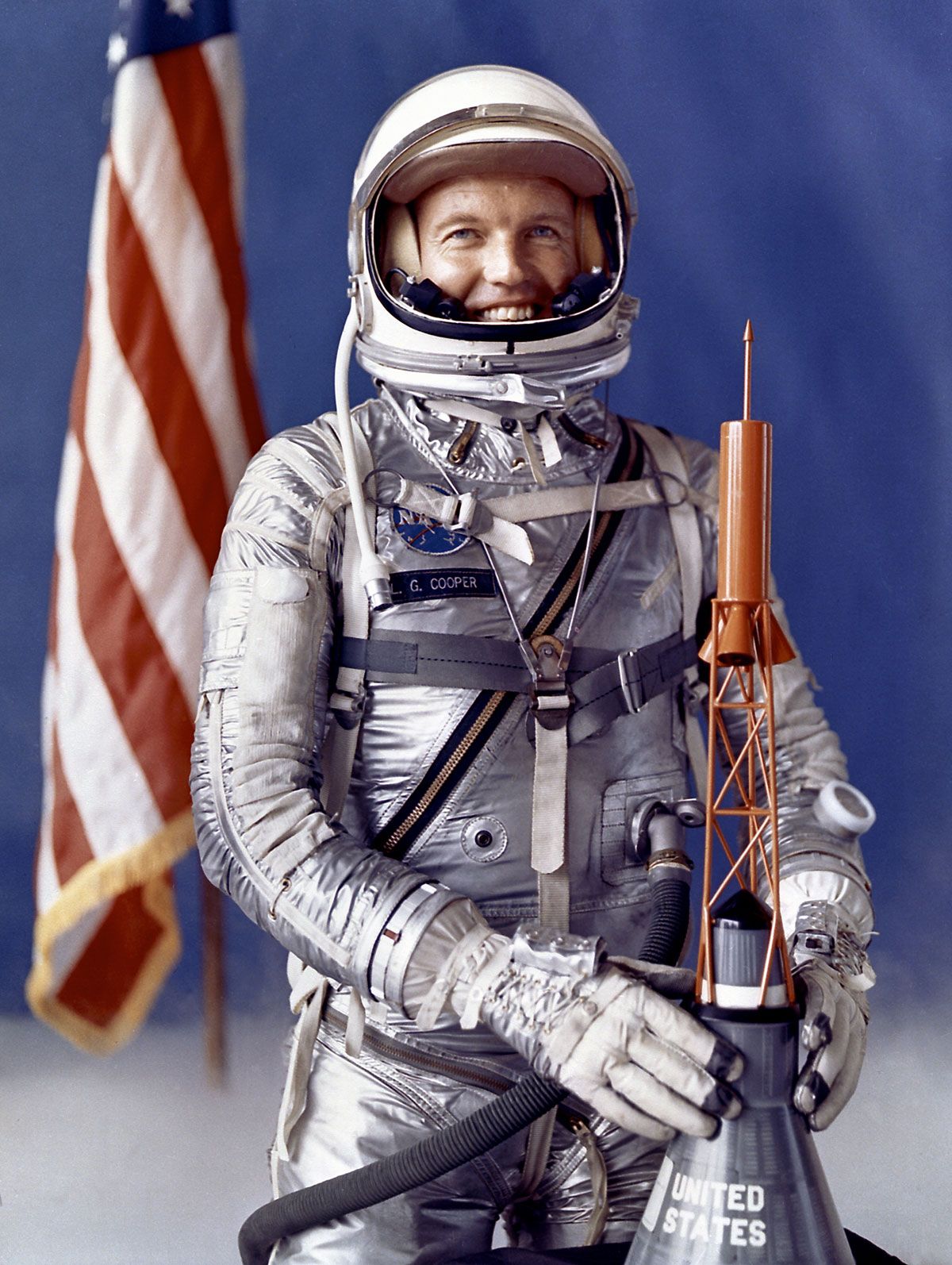 NASA mourns the loss of Mercury astronaut Gordon Cooper, who rocketed into space in his Faith 7 capsule on May 15, 1963 (above, right). Cooper, the youngest of the Original Seven Mercury astronauts, died at his California home Oct. 4, 2004 at the age of 77.

My buddy and I did tricep presses with Dee Snyder of Twisted Sister in a gym on Long Island. He invited us work in with him on the only machine available, and he's the nicest, most down-to-earth dude you'd ever want to meet.
B

Sandog said:
Met Martin and Mantle in a restaurant in Lakeland, Fl. Dodgertown is in Lakeland. I got to throw out opening pitch once for minor league season opener.
Ted Kluszewski at a Reds game in Cincinnati. He was huge. Wore a sleeveless jersey because his biceps were so big.
A J Foyt in the paddock at the 12 Hrs at Sebring. An advertising guy was after me to sponsor the Tide NASCAR entry and took me schmoozing.
Orel and his family in Vero.
Traded a 67 big block with Bill Tower for a 68 327/350 hp roadster. Got to crawl under his $2M Gran Sport when he had them all in a barn in Plant City.
Sat with Sinbad for a few hours in a Clearwater establishment having to endure the awful task of judging a beauty contest for Playboy. Had to endure dancing with a current centerfold.
Click to expand...

LadyDigger said:
Re: Who's The Most Famous Person You've Ever Met?

I was stationed on the USS Shenandoah (AD-44) with his cousin!

(Does that count?) LOL

Met at the commissioning of one of the Navy's Finest Nuclear Subs at EB, Groton, Ct....the then VP George Bush (Poppa Bush), Adm Rickover (very long winded!) and was the duty driver that day for the then Sec of the Navy, John Lehman.

At one of my re-enlistments (was also the ships commissioning day), W. Graham Claytor Jr (former Sec of the Navy and heir in the railroad company. 1912-1994). He attended my re-enlistment!

While patrolling Shea Stadium back in high school as an Auxilary Police Woman, met in the same night, Soupy Sales and Robert Wagner (both of them signed my patrol book, which I still have!)...SUPER NICE GUYS!

Got a pic of Tony Danza's arshe...LOL! We were in NY in Nov 2004, just coming out of the hotel, who walks by, but Tony Danza, his wife and daughter. Before I realized who it was, he already walked past me...he looked right at me and smiled too! (swoon!)...so all I got was a pic of his arshe! LOL

Temptations ... still have my autographed T-Shirt and photo of us!

Dang, the name escapes me... The Shirelles, I think it was...the ones who sang the NAME GAME! Dang it...it was at a resturant in Long Island we where having dinner at...got a pic with them and autographs on a napkin!

The Apollo Astronauts, think it was 1969...they were at the Channel 5 Office (NYC), which was across the street from my grandparents house...Buzz Aldrin and Neil Armstrong. I think that is who it was...LOL... we were just kids and they (the adults) ignored us! But we got to see them anyways, even though no autographs or photos!

Pope John Paul at the Vatican. It was a special meeting with the Pope.

There are more, but having my CRS moment!
Click to expand...

watercolor said:
Re: Who's The Most Famous Person You've Ever Met?

Aside from meeting Brett Farve and Ernie Banks, my most memorable encounter
was actually caddying for Jock Hutchinson and Chick Evans in the late 1960's at
the Glen View Club near Chicago when I was a kid.

For the record, Jock Hutchinson won the 1920 PGA Championship and
1921 British Open; And Chick Evans won the U.S. Open and U.S. Amateur
Championship in 1916. . . both titles in the same year as an amateur.
(I wish I had a few Merc's from Denver back then

My neighbor will be 98 years old this year. He started caddying at Latrobe when he was 7 years old.
S

Yes, 4 speed,( original shifter), L-79, with factory a/c, in Goodwood Green. Here at an autocross in Tampa and a glamor shot. Only thing I have left is the original owners manual. Forgot to give it to the buyer. 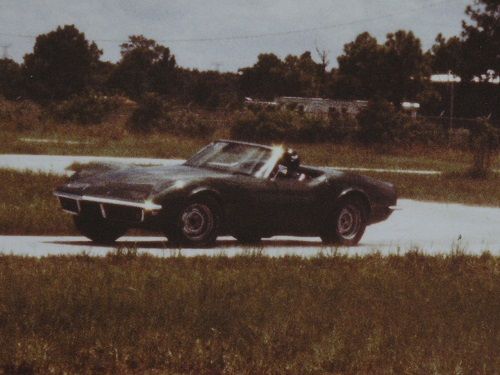 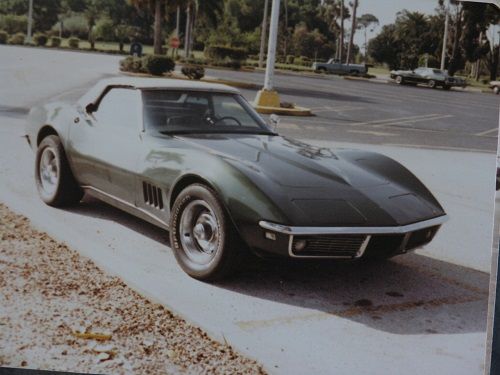 I've met a few football players, Ickey Woods ,Lorenzo Neal, HOF player Ed White and some more from the Chargers from the 80's. A pitcher for the Astro's also can't remember his name and also some musicians we worked security for at the fair and also some comedians. Dang I miss my younger years working security, I hung with a lot of cool people that partied too hard and died way to young.

I can't remember all the famous people I met, a short list would start with Bobby Ellsworth- overkill, peter steele- type-o negative, Hank Williams 3rd, hulk Hogan, gene wilder, I think I ran into Joan Jett, but was poop faced, etc, mayor's, governors. Most while I lived in Connecticut.
Last edited: Jul 29, 2022

I met Hulk Hogan once back in the 80's in a gym that I belonged to in Stone Mountain, Ga. Super nice guy. (Long story), I'll spare you.

I used to do Living History of the CW. I belonged to the 30th Ga. Infantry Co. E, Army of Tennessee, CSA. We were in Olustee, Fla. doing the Battle of Olustee, Fla. This was back around 1984? They were filming the movie "Glory" about the black Union Regiment from Massachusetts starring Mathew Broderick and Morgan Freeman. They filmed several short battle scenes while we were down there for the reenactment. Morgan Freeman and the other actors portraying the Massachusetts regiment marched in one morning and formed around the monument joining all the other reenactors for morning colors. After colors, we were dismissed and I met and shook Mr. Morgan's hand. A great actor.

My family and I met Lee majors at a convention about 6 years ago. My hero when i was a kid aka The 6 million dollar man. He was very cordial and polite, and commented I had a very nice family.

Where good deeds are performed daily

Detector(s) used
Garrett Fortune Hunter, Garrett American S3, Compass Coin Magnum and a couple of others you will only find in museums!

And,
To date,
I have met with my Congressman 3 times,
(Two different Congressmen.)
To discuss issues relating to the VA.
And the IRS.

Let's be careful and not breach "Politics," Ok?
There is a thread for that, Dig?

Where good deeds are performed daily

Detector(s) used
Garrett Fortune Hunter, Garrett American S3, Compass Coin Magnum and a couple of others you will only find in museums!

I never met Eddie or Dave, but attended a few concerts!


Hmmm...
Does Eddie have a "substance abuse" problem?
Your call...

I''d love to play along with Eddie....
(What substances are we talking about?)

I have partied with "Head East" backstage at "Jimmy's Jigger" on State Line Avenue in KC.
Must have been about the mid-late 80's......

Thanks for your reply!
It brought back precious memories of long ago.....!

Does this song remind you of anyone?
Or "Dick's Creek?"
Where I camp and hike?

I was 16 years old at the time. I was 6’0, 225 and he was about 6’5, 395. I had just bought his new album so I recognized him. I went to shake his hand to meet him, and he pulled me in and gave me a mighty chest bump. I wasn’t ready for it, surprised almost lost my balance. He was nice and took time to talk and sign autograph. One of my funnest, favorite stories to tell
You must log in or register to reply here.