1906 San Francisco License Plates...Where Were These Mounted? And to What?

I dug these 1906 San Francisco license plates out of various places in San Francisco. Both are dated from 1906 and are made out of brass or bronze. Both have a silver color
plating. They measure at 1-3/8" wide, and 4" long. You can see the price of $1.50 stamped into both.

Does anyone know what type of vehicle these plates were mounted too? Was it a horse and buggy? Or was it an early motor car?

Where was it mounted to on the vehicle? To a dash board? On a door?

Any information will appreciated.

Found this pic online. Not an exact match and are for Washington but same date and might give you some ideas. Looks like the probably would have gone on a Model T Ford. http://www.mtfca.com/discus/messages/29/13023.jpg
Upvote 0
C

Love those tags and love your avatar.
Upvote 0

cool piece of history you have,not a lot of items left from the 1906 earthquake
i think your tag/plate is the vehicle registration number tag, that the state
sends you to make your own plate, at least thats my understanding from read @ the
links,havent found any info why right or left on it,maybe some ID stamp for the
stamp machine that made it

The Model T was introduced in 1908, so it for something before that.
Upvote 0

On this page you'll find an 11 minute film of Market St. Taken in 1906 before the great earthquake and fire.

Lots and lots of activity on the street and many horse drawn wagons as well as horseless carriages.

Pretty interesting to watch although at least some of it appears to be staged.

This guy makes numerous appearances in the film.

You can see the license tags. Not all motor cars have the large numbered plate but most have a smaller tag similar in size to the OP.

None of the horse drawn vehicles have tags that I could see.

I know that doesn't explain "left" and "right" but it's all I've got.

Full disclosure on the making of the 1906 film just 1 week before the earthquake.


And some follow up for those who want a deeper dive:


Sorry to hijack your thread. I was fascinated.
Upvote 0
OP

Thanks much. Iv'e seen this movie clip many times and I absolutely love it. I've actually dug (3) of these vehicle license tags in S.F. The one not seen is broken in half. This seems to be a big mystery as to where these were mounted and to what kind of vehicles they went on. I wonder if this style of tag is unique to only S.F. for only a short time? The details of this might be lost to history perhaps?
Upvote 0

Cool Hand Fluke said:
Thanks much. Iv'e seen this movie clip many times and I absolutely love it. I've actually dug (3) of these vehicle license tags in S.F. The one not seen is broken in half. This seems to be a big mystery as to where these were mounted and to what kind of vehicles they went on. I wonder if this style of tag is unique to only S.F. for only a short time? The details of this might be lost to history perhaps?
Click to expand...

So what do you know about the large numbered tags on the automobiles? I saw something while researching that said California state tags weren't available until 1912. Hard to tell from the poor resolution but they appear have CAL on the right edge. The guy in the 60 Minutes clip was able to track down the car owner(s) using the number(s). A couple of the autos in the film appear to have a small tag (similar in size to yours) attached to the bumper above the larger numbered tag. They also have a round marker next to the smaller tag - sometimes on the right and sometimes on the left. Any idea what those are?
Upvote 0

Those remind me of the Chauffeur or Carriage Licenses we find in PA. Cool
Upvote 1
I

On the link cw0909 posted (https://picclick.com/Early-California-1906-license-plate-tag-piece-113257971438.html) appears "What you have is a portion of a San Francisco vehicle license for the year 1906. One-third of it is missing. These were issued in pairs marked left and right with instructions to attach them to the sides of cars. The City used these to raise money for the building and maintenance of streets."

This info was provided by plateman on eBay. While he is no longer active there, a look at this feedback at https://www.ebay.com/fdbk/feedback_...eedback_page:All&_trksid=p2545226.m2531.l4585 shows he dealt in auto license plates and decals plus a lot more.
Upvote 0

DCMatt said:
... I saw something while researching that said California state tags weren't available until 1912. Hard to tell from the poor resolution but they appear have CAL on the right edge.
Click to expand...

This is an interesting mystery trying to track this down.

Three licensing agencies requiring plates ? California, San Francisco, and The Park Commission of The City and County of San Francisco.

The Park Commission required the numbers to be displayed front and rear. I'm wondering if the smaller tags you're seeing in the film might be cars licensed to enter the parks. (Think Golden Gate Park ... being the big one. "Coaches, Hacks, and Cabs" were commercial and would want the extra license to be able to use the park.) Perhaps these park plates were smaller ... otherwise they would be confused with the California plates.

The California plates are interesting in that you didn't get a plate before 1912 ? ... Sometime around then, California started issuing plates. Before that, you got a license and had to get your own damb plates. You could make them up yourself, but often went to private shops that would make them for you. Had to be 5 " tall ? ... something like that. As long as you only used black and white colors.

After the earthquake, they started a new shop over there on Market Street ... being as there was a lot of space. 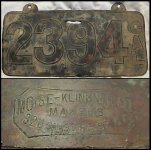 Those are very small & I am going to say that those were bicycle tags, that attached to the back of the seats.
Upvote 0
You must log in or register to reply here.

No idea what these are.