I was cleaning out my basement and found an old bullet that appears to my grandfather's. He fought in Vietnam. This is a huge bullet measuring 5 inches in length and 1.5 inches in width. Weight is 1lb and I've never seen anything like it. No markings can be seen. Hoping for any help on identification or what sort of gun this came from!! Thanks. 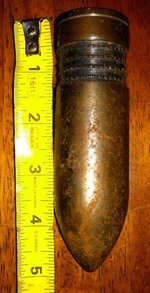 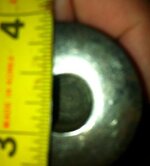 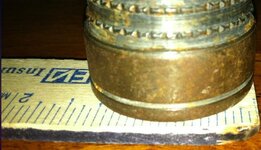 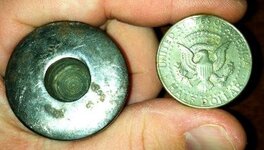 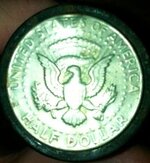 My guess is its a 37mm antiaircraft. Precise metric measurements will help ID.
Upvote 0

I agree that it appears to be a 37-millimeter caliber projectile. But the photos tell an Artilleryman's eye that it is a Solid-Shot ...a solid (not hollow), non-explosive projectile, a type which is not used against aircraft, but is instead a type of armor-piercing (AP) ammunition. It is generally classified as anti-tank ammo, but of course could be used against other armored targets, such as an armored personnel carrier, or a lightly-armored ship.

Armor-piercing 37mm projectiles have been in widespread use since the very-early 20th century. Unfortunately, this specimen is missing its copper/brass Driving-Band (which also called a sabot). Without it, I cannot say whether this specimen is from the 1930s or 1950s, etc. Nor can I say whether it is American-made or British or French, etc.

I should mention that this projectile's sabot/driving-band being missing indicates the projectile has been fired and was afterward picked up by somebody as a souvenir.

I see that this ID-request is AhhTheHeff's very first post here at TreasureNet, so I'll say "Welcome to the TN forums, AhhTheHeff!"

Let me also say a big THANK YOU to AhhTheHeff, because the many close-up photos (with a ruler in them) show that he (or she) DID bother to read and follow the instructions in the "Please read before posting items in What-Is-It?" message. Many people do not bother to do that -- thereby making the job of What-Is-It forum's ID-helpers much harder. So I'll say again, thank you AhhTheHeff, for the many photos with a ruler right up against the mystery-object.
Upvote 0
OP
A

Thank you for all the help!
Upvote 0
You must log in or register to reply here.