Ok, so I know the yardstick and penny pictured with it aren't exact measurements, but they give the initial idea here..
This was found in the wet sand at low tide on a rocky New England beach. The area isn't deep water..just deep enough to let a few clam boats pull up and load up a vehicle on the boat ramp made of crushed stone. Area goes back to the 1600's and earlier I suppose. 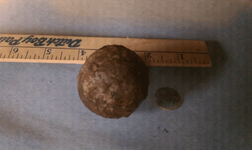 I guess its grapeshot or caseshot by what I've read.

I don't know much about cannon balls, but it sure looks like one IMO. Were you using your GT? What kind of response did you get?

Somewhere on here cannonballguy posted a weight and diameter chart for cannon balls. There are specific weights and diameters for a round iron ball to be a cannon ball. Iron or steel balls can be ball bearings, mill balls or other uses. You need to know the precise diameter and weight and compare it to the chart to see if yours is truly a cannon ball. Yours could be grape, case and cannister balls are smaller, but I am going by your photo which seems to show a diameter of about two inches.
OP

Yeah I think the diameter is about or just under two inches. Don't have a weight yet. It's quite pitted with age.
Fletch88: I was using the GT with iron mask on, which usually works. Maybe it was the shape of it or maybe I pinpointed it but I recall an excellent tone - I thought pulltab at first but when the depth was going down to the 6", I was certain it was going to be a big lead sinker. Maybe I need a refresher course because I thought it was all ball bearings these days.
Here is the link to cb guys chart I think:
http://www.civilwarartillery.com/shottables.htm

I found one of similar size in a 1812 battlefield, but have yet have it ID'ed 100%. I had photos, with the wt. and dim's sent to a British ordinance society in England. They would only say that it wasn't British, possibly American or French. Same with the Canadian historian at Parks Canada. The only thing I can find that is closest to a 2-pound French Falconet from the 1650's. Maybe someone out there has an answer. 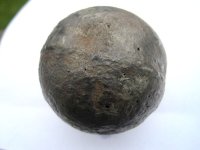 Gldnbrew, just above your post, Donkarlos reposted the link I've repeatedly posted for checking the identity of iron balls. If you go to that link you will see that your War-Of-1812 battlefield ball is just .04-inch smaller than an 18-Pounder caliber grapeshot ball. Artillery balls made prior to the 1840s were very slightly smaller in diameter than the sizes listed in the 1861 US Ordnance Manual.

I'm sure it is not a 2-Pounder caliber cannonball, Here's why: a cannon's "Pounder" designation was based on the weight of a Solid-Shot cannonball for that cannon. According to the final chart in civil war era US Ordnance Manual (at the posted link), a cast-iron ball which weighs exactly 2 pounds was 2.46-inches in diameter.

In your Visitor message to me, you asked:
> I have a second question. I came across a site the other day on cannon balls, that person was claiming that
> only British shot had seams from the molding process and the American shot did not have any seams. Is this true?

That is false. In fact, the truth is very nearly the opposite of what that apparently seriously un-educated website owner said.

A casting-mold seam on a cannonball is caused by the two halves of the ironcasting mold being improperly aligned, or by the manufacturer's decision to not expend the labor needed to remove the seam-line from the cast metal object (a process called "finishing" the metal casting). During the Revolutionary War era and the War-Of-1812 era, British artillery ammunition tended to be much better made (and "finished") than American cannonballs. So, the American ones from those time-periods are much more likely to show a casting-mold seam than British-made cannonballs.

For the same reasons, Confederate-made cannonballs are far more likely to show a moldseam than 1860s yankee-made ones. That has caused many relic-diggers to wrongly think a moldseam on an Artillery ball means it is a Confederate-manufactured one. But that is proven false by the large numbers of RevWar and War-Of-1812 balls which have a moldseam.

I should mention, civilian industrial-usage balls, such as Mill-Balls (rock-pulverizer balls) commonly show a moldseam... because unlike Artillery balls, the Mill-Balls do not need to be finely finished. Cannonballs MUST fit smoothly down the cannon's bore -- any projections on them can cause problems during loading or firing. But balls made for use in a rock-crushing machine don't need to be finely finished.
Last edited: Dec 9, 2013

Thanks for the response, as to my second question, I did not think the statement, about the moldseam was was true, but I am no expert and had to ask. Back to the cannonball, I don't feel that it is grapeshot and here is why. The largest documented cannon at this battle was 1- 12 carronade captured by the Americans, the other reported cannons were 6 pounders and swivel guns. This cannon shot (pictured in above post) is the only one I have found in the 90+ grape and cannister shot that I have recovered from this battle, this shot was in the center of an area that I had collected some 20 + grape and canister. I have been over this area very thoroughly many times to find another ball, but no luck. I feel if it had been grapeshot there would of been more than one in that area, plus grapeshot for a British 18-pounder weighs 1 lb, 8 oz. each with a diameter of 2.201 inches. The creek where this battle took place is shallow and narrow and the British gunboats had to pole up it. These smaller gunboats typically carried either 6-pound cannons or 12-pound carronades and swivel guns.

What do you think the possibility of that shot being from a French cannon? The French have been in the area since the 1700's. As stated, in previous post, the 2" French Falconet is very close to the size of the ball. Both sides would of had access to a French cannons.

>[SIZE=2[I]]I should mention, civilian industrial-usage balls, such as Mill-Balls (rock-pulverizer balls) commonly show a moldseam... because unlike Artillery balls, the Mill-Balls do not need to be finely finished. Cannonballs MUST fit smoothly down the cannon's bore -- any projections on them can cause problems during loading or firing. But balls made for use in a rock-crushing machine don't need to be finely finished[/I][/SIZE].

I can a sure that all of these are real artifacts. The area, where found, is wooded, secluded, never been settled and has remained wild since the battle.

Paul
You must log in or register to reply here.

cool find of the day