Hello I found this interesting piece in an area I’ve been detecting that has been covered by asphalt since the early 1950s. There has been zero modern trash and lots of three ringers, several matron large cents and fatty Indians.
I tossed this in the bag and shrugged it off as something to look at later because it was covered in clay. After a general careful cleaning I could see gold gilt and part of a wooden rod still attached. I can find no markings of any kind and after pondering it looks like a flag staff piece. I found a fuzzy picture of one that I think resembles what I found does anyone have an opinion on this ? Thank you all in advance. 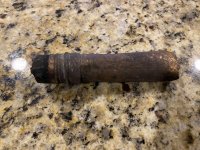 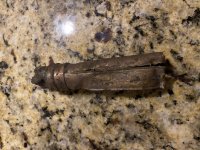 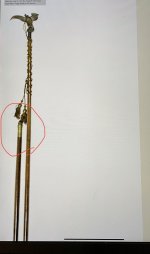 Part of a guideon staff possibly.

I suggest posting this in the What Is It? forum. Lots of knowledge there.
You must log in or register to reply here.