My first real permission - nothing to sing about, but promising...

As I was taking my son home from a summer day camp, I passed by an area that has recently been leveled and scraped by front-end loaders to prepare for construction of a new shopping center. I looked up the history on the site and found that there were structures indicated there as far back as 1862 on topographical maps, but more recently there was a chicken farm with a residence established sometime in the mid 1930's. My son and I stopped in and inquired if we could do a bit of metal detecting in the areas where the machinery wasn't operating. Not only were we given permission, one of the workers directed me to the area where he removed the foundation of the former residence. We didn't get much time (about an hour and a half) at the site, due to a thunderstorm. But we did come away with a few interesting pieces, which included the following: a vintage brass appliance handle (no writing on it at all), two vintage glass-top fuses, a brass Rockwood fire system sprinkler head (made sometime between 1928 and 1940, some Jackson and Perkins Rose and Petunia plant tags, some modern clad, and three wheat pennies dated 1932, 1944, and 1958 (D). Hopefully we'll get back there again tomorrow or later in the week and find the older coins and relics that I'm sure are waiting for us! As always, thanks for looking! 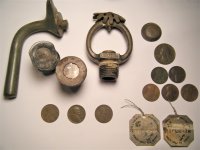 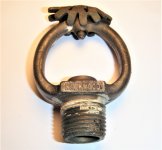 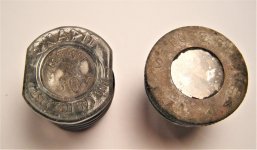 Congrats on a permission! I would get back there soon. Construction permissions sometimes have a bad habit of turning into a do not enter site. The quicker you get back, the greater the odds that you are welcomed back with open arms. There is more to be found. Good luck!
OP

RJGMC said:
Congrats on a permission! I would get back there soon. Construction permissions sometimes have a bad habit of turning into a do not enter site. The quicker you get back, the greater the odds that you are welcomed back with open arms. There is more to be found. Good luck!
Click to expand...

Thank you, and I will try to get there again tomorrow!
S

Your 1932 penny is a great start. Congratulations!

Congrats on the Wheats,, now go find the Silver.

Those old screw in fuses bring back memories of when I was a kid. Fun finds. Gary

Looks like a few nice relics. Congrats on the Wheats.

Congratualtions on the nice finds!

I bet there is more keepers!

The wheaties are a good sign! Be sure to get back there before it's developed...
You must log in or register to reply here.