Another beach day nets a little silver and LOT of lead

It's been a while since I was able to make it to the beach, but I managed to sneak in a few hours today. Unfortunately, there weren't as many targets as usual, so I dug every signal. The result was a small amount of clad, a lot of fishing sinkers and bullets, and a few keepers. I did manage to find one silver dime - which, based on the reverse of the coin, was a Mercury dime. The obverse, however, was beyond salvage, so I'll never know what year it was minted. The best find was a silver bracelet which was marked "DNT .925 Italy" and weighed in at 11 grams! (It also cleaned up nicely!) I also found a copper medallion which turned out to be an Anheuser Busch pendant. I was able to find some just like it on eBay, but none of them have a date range of when it was manufactured. If I had to guess, based on most of the clad I found, it's from the 70's. It also cleaned up well via electrolysis. I know it isn't much, but it was a lot of fun to get back out to the beach! Thanks, as always, for looking and happy hunting to all of you! 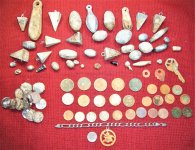 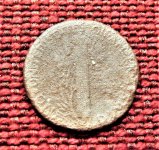 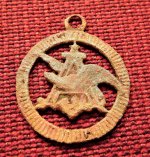 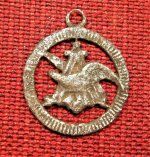 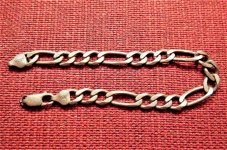 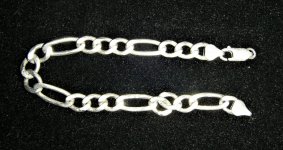 Looks like you had a good hunt. Silver is always nice and I like fishing sinkers for some strange reason.

Keep swingin. I’m sure there is a lot more out there to find.

Great finds and I like fishing weights also but I melt them down and make new weights for drop shot fishing.

tnt-hunter said:
Looks like you had a good hunt. Silver is always nice and I like fishing sinkers for some strange reason.

Keep swingin. I’m sure there is a lot more out there to find.

Thanks! It's probably going to be after the new year before I can get back out there, but you know I will!
OP

Back-of-the-boat said:
Great finds and I like fishing weights also but I melt them down and make new weights for drop shot fishing.
Click to expand...

Thanks! I give them to the people fishing when I can, but yesterday there were only a few of us out there.
OP

Tom, great bunch of finds there Congrats! Boy the beach sure does a job on a Merc!
OP

Thanks, and you're right. Most of the silver coins I find at this beach are very toasted, and this is the first one that was so bad you couldn't even see an outline of the profile on the front of the coin, let alone the date! I'll still take it, though - silver is silver!
T

Cool finds,now you can do a lot of fishing.
OP

thrifty76now said:
Cool finds,now you can do a lot of fishing.
Click to expand...

LOL, it just so happens that's my second favorite hobby!
You must log in or register to reply here.