Button found at a home built in 1880. Help ID this please. 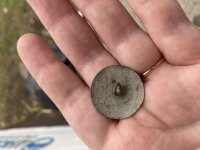 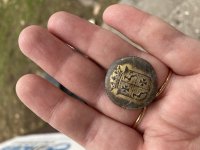 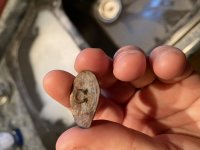 Hi there! Brand new to the group but found you while trying to learn more about a button in found in the ground outside of our home in NW Minnesota. Any help identifying this buttons origins would be highly appreciated.
Sort by date Sort by votes

Welcome! That's a nice looking button. There are experts here that will nail it down quickly.

My guess is a British livery button.
Upvote 0

Hi Jennifer boy did you come to the right place it?s a beautiful button somebody will know a lot more than I but it definitely looks British with the gold guilt and I think that might be a old shank back
Upvote 0

duggap said:
My guess is a British livery button.
Click to expand...

I agree. Looks like a livery button.
Upvote 0
I

If you gently clean the back there may be a maker's mark.
Upvote 0

Agreed. It is a livery button and a very nice one.
Upvote 0

I think pseudo-livery fashion button rather than that being an actual family or company crest. Looks to be a fantasy using borrowed heraldic elements of greyhounds(?) and Maltese crosses. Couldn't find it in 'Fairbairn's 'Crests of Great Britain & Ireland'.
Upvote 0

I pulled these from other TN threads...

Great info on button dates vpnavy , thanks for posting
Upvote 0

Red-Coat said:
I think pseudo-livery fashion button rather than that being an actual family or company crest. Looks to be a fantasy using borrowed heraldic elements of greyhounds(?) and Maltese crosses. Couldn't find it in 'Fairbairn's 'Crests of Great Britain & Ireland'.
Click to expand...

On this one I'm going to somewhat disagree.
I think the quality is there for a 19th C Livery Button, although without a back-mark & a reverse looking more late 18th C rather than 19th C, it's a bit of a guess based on the fact most are 19th c. Plus the gold gilt is in keeping with the usual examples.
As many of these from this period would often be for up & coming (new money) industrialist etc, the generic designs were often picked off the shelf & have no previous family heraldry history. So these people created the illusion of a family with a higher class than they actually were. This could be linked to a family name but not always via the traditional heraldry route.
There are too many designs that have never been documented properly, so your unlikely to match it.

The Crown type is similar to a Ducal Coronet, which might be one route to research.
Last edited: Oct 1, 2021
Upvote 0
You must log in or register to reply here.