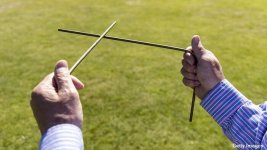 An extreme drought currently impacting California has resulted in big business for practitioners of the ancient art of dowsing. Although the centuries-old technique of locating water by way of divination, often by using a rod or some other instrument, has largely been dismissed by skeptics as a form of pseudoscience, desperate owners of numerous ranches, farms, and vineyards have reportedly turned to so-called 'water witches' in the hopes of finding some relief from the current crippling conditions afflicting the state this summer.

"This is my busiest I think I've ever been in my life," dowser Rob Thompson marveled at the sudden demand for his services. His work consists of wielding a pair of three-foot-long metal rods and walking through a property with the divination devices until he senses heretofore undiscovered water often located hundreds of miles below ground. What a dowser feels when they hit a target apparently varies depending on the person as one water witch said that "it leaves me hot, just like if you short a battery," while another described it as a "chilling sensation."

As one might imagine, experts have a dim opinion of the practice with the National Ground Water Association declaring that dowsing is "totally without scientific merit." To that end, hydrogeologist Timothy Parker observed that his work locating water involved using a variety of sensitive high-tech instruments "compared to dowsing, which is a person with a stick." For his part, Thompson dismissed the scientific skeptics, arguing that "they don't know the facts" and claiming that "I'm rarely wrong."

While there is an undeniable difference of opinion as to whether dowsing has genuine merit, landowners who have found success using water witches swear by their work with vineyard director Doug Hill musing that "seeing in believing." This sentiment was echoed by Johnnie White, the operations manager of a company that oversees a whopping 70 vineyards and employs numerous dowsers, who revealed that "I haven?t ever used a geologist to find water."
You must log in or register to reply here.