While the vernacular of 300 years ago has changed...its clear what a big deal this was.

It would take months for this story to circulate. Bet they wish they had Internet and cellular phones back then.Its pretty interesting.
OP

You can see how the news changed from 10 ships lost to now 2 ships lost and all the treasure recovered.I guess that news thru the grapevine got changed.Then we have the 1715 story 300 years later and it was 11 ships lost and the griphon was the only ship that survived.I have never heard of the V.Z. The Flying-Heart that survived.

Detector(s) used
I detect the history: I've visited archives up & down the entire US East Coast, Bahamas, Jamaica, Kew, The Hague, etc. Have yet to go to Seville or S.American archives.

I couldn't find any Boston News-Letter stuff from August 1715 thru April 1716, so either they didn't report it, my eyes were too tired to see it in the old print, or news took a year to hit the northeast coast. The latter seems unlikely since Bellamy was already on his way from Massachusetts to "fish ye wrecks" by April 1716 & there's lots of misc documentation in 1716 about the wrecks. 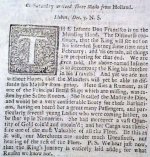 I believe Madre de Dios could be any of the ships. It's not like they had their names blasted on the bow or the stern.

But now I question whether this is 1716 (even though Saturday January 7 aligns with 1716). The "infante" Francisco was the short-lived 2nd son of Philip V, born 1717, died 1 month later. However, the queen had a miscarriage in January 1715 just 1 or 2 months into pregnancy, so now I'm really confused. Maybe this entry has nothing to do with the 1715 wrecks?

If it is 1715 (reporting on ships lost in 1714), perhaps Madre de Dios was one of the many ships Ubilla lost while languishing at Veracruz?
You must log in or register to reply here.