We at the Kindle Farm School are fortunate to have our campus located on a property that dates from the 1750's. Our treasure hunting class finds all kinds of neat items, but none so far as neat as this one! Last week while doing some trail building we uncovered this absolutely incredible bayonet. It was in found adjacent to a stream bed and either washed out of the hill side or was dug out of the stream while preparing it for the trail bridge. After comparing it to pictures we found online, it looks like those that were made between the time of the American Revolution and the Civil War. We haven't attempted to clean it yet, but it has the letter U followed by some other lettering on the side. Can anyone give a more specific date range for it? The integrity of the metal is incredible, its still razor sharp and has minimal rust issues. Should we use apple cider vinegar to restore it a bit?

A couple weeks ago we received and e-mail from Joe Serbaroli, author of European Bayonets of the American Civil War: A Guide to the Imported Bayonets of the Union and Confederacy, Including American-made Bayonets for Foreign Arms. He was able to provide some fantastic new information on our bayonet. While we received great information from members here and through our own research, Mr. Serbaroli offered some corrections and additions.

Our bayonet was manufactured in the city of Liege, in modern day Belgium between 1760 and 1780. Liege was one of the major arms manufacturing centers servicing many European powers and also private merchants. He was able to date the bayonet as being made after 1750 because the mortise (slot) has a 3rd step, as opposed to only 2 steps. The 3rd step or leg was an improvement first noted on French bayonets in the 1750's. A similar example to this Liege-made bayonet was excavated at Fort Ligonier, but has a 2-step mortise typical of the French & Indian War era. This particular bayonet might have been either issued to American colonial troops rather than British regulars during the French and Indian Wars; or it may also have been smuggled in during the American Revolution by a merchant. If it was smuggled in, it would have shipped from Amsterdam or Rotterdam and arrived in Portsmouth, NH as part of the business operations of smugglers like Patriot John Hancock. Once in the colonies, the serial number would have been hand engraved. The D would likely be the company number, and the N 826 would have been the weapon number.
Since our school is situated on a mid-1700's home site first owned by former New Hampshire settlers with a military background, the bayonet probably saw service during the American Revolution. This is not to say it was used in battle, but it would have been in the militia inventory and assigned to a militiaman.

We are currently in the process of building a display case to exhibit the bayonet and other finds from our area.

Also, with the start of 4th Quarter, the Treasure Hunting Class will once again be out in force! We will provide weekly updates of our finds, so stay tuned! 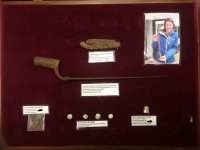 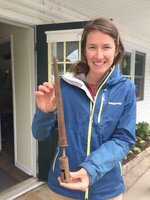 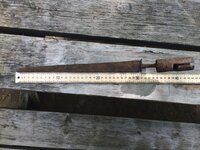 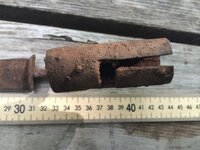 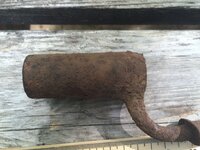 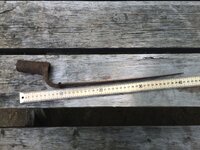 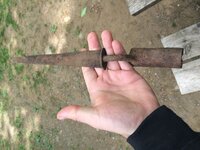 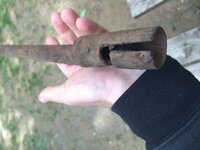 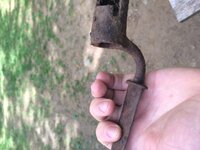 Great find there and welcome to the board, you just never know whats out there

What you have is called a "socket" bayonet...

Nice find, it's in amazing shape, I like it. And welcome to T-net
OP

Thanks everyone! We started our Treasure Hunting class last Fall. So far we've found a few flat buttons, an engraved sterling thimble, a VT Copper, Civil War General Service button, and an 1800's pocket knife. We did coin roll hunting in the winter and managed to nearly fill a few old Whitman binders of pennies and nickels. The kids love the activity. It has been great to get to introduce treasure hunting to our students as it is one of my personal passions. On my own time I post as Oxbowbarefoot here on T-Net, but I felt that the school should have it's own profile to share our finds

Can't help with an ID but with iron relics, it's best to have someone that's done it before perform electrolysis to keep the iron from crumbling to nothing. I've never done it and DIY is pretty simple but I watched a cannon projectile (canister shot) that I dug flake and erode in less than a year
OP

borntohunt460 said:
Can't help with an ID but with iron relics, it's best to have someone that's done it before perform electrolysis to keep the iron from crumbling to nothing. I've never done it and DIY is pretty simple but I watched a cannon projectile (canister shot) that I dug flake and erode in less than a year
Click to expand...

Thanks borntohunt, I've had a lot of success with apple cider vinegar to remove rust and then using oil to preserve the iron. Thanks for the idea on the electrolysis.
OP

After a light brushing, the lettering on the side appears to say: DN°826

Thought sure I responded to this already but my computer has been acting screwy. Anyway.. Make a solution of 1 part molasses to 10 parts hot water and soak it for a week or so. It's kinder to the metal than vinegar. Remove & scuff with 000 steel wool. Repeat as needed. A plastic window box type planter works good for soaking long narrow objects.
Last edited: Jun 1, 2015

Wonderful find and wonderful program at the school. Wish they would have had classes like this when I was a young boy in school.
OP

fongu said:
Wonderful find and wonderful program at the school. Wish they would have had classes like this when I was a young boy in school.
Click to expand...

The kids have a blast. We were able to buy 2 Garrett Ace 250's in the Fall. They have served us well, but now the class is so popular that we need to figure out a way to buy a few more to meet the demand. 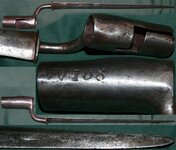 Based upon the size, locking mechanism and blade style I agree that this would be a German-Dutch bayonet from the Revolutionary War. This specific type of bayonet would have been used by the Hessian troops during the war. According to the National Museum of the American Revolution, "This German-Dutch knife-blade bayonet, made to attach to an eighty-caliber musket barrel, represents the most vicious type employed during the Revolutionary era. Outlawed by all Nations except Germany. Washington ordered all captured examples stored and warned the enemy that no quarter would be granted any soldier captured with one." This is one of the more rare bayonets of the American Revolution.

KINDLES LOOKS REV WAR TO ME, CORRECT ME IF I AM WRONG FELLAS AND GALS,VANZUTPHEN
OP

Wow, That would be so cool if it is from the Revolutionary War. I'll try to get some better pictures up tonight. Thanks for the comments!
A

Great Find ! If there had been "treasure hunting class" when I was in school , my attendance would have been perfect , my grades
off the charts , but they wouldn't be able to graduate me !
You must log in or register to reply here.

Low hopes and an entry level detector but I still ended up finding an awesome relic!