Mauch Chunk, also Upper Chunk and East Chunk : (pronounced Mock-Chunk) Sometimes called just plain "Chunk". Not a patch; the former name of the town now called "Jim Thorpe". In the mid-1950's, the town was looking to attract industry. It struck a deal with the descendants of Jim Thorpe (the athlete) to have Mr. Thorpe buried in Mauch Chunk. The town agreed to erect a memorial to Jim Thorpe and to change their name from Mauch Chunk. Jim Thorpe did spend part of his youth in Pennsylvania. He played football at Carlisle Indian University.

Roaring Creek is a tributary of the Susquehanna River in Columbia County and Montour County, in Pennsylvania, 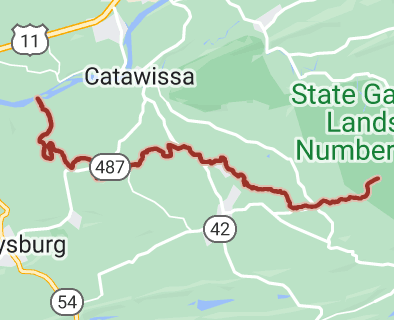 If you can figure out how to search using this

Gold in the UP