Bought a big house built during the war and found some coins in a hidden compartment (also found framed body building news paper clips but thats another story completely).

Don’t know much about coins and can’t find much information about this coin, maybe anyone has more knowledge then me?

It is a miniature gold colored 1978 Liberty Quarter, weighs less then a gram and is about half an inch wide (give or take) - see picture for size reference.

Front: Liberty, 1978, in god we trust
Back: United States Of America, Quarter Dollar

My original thought was that it was something similar to the Canadian Royal Mint that made mini gold bullion that came in “tablets” 1gram x 20 design, you could pop them out of their sheet or keep them as they were. However, this seem to weigh a bit under one gram (on my kitchen scale) so not sure it is the same.

Also thought it might be fake but it is highly detailed and why bother to make a mini when you could do a true to size one?

If anyone has any idea feel free to enlighten me! 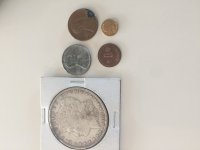 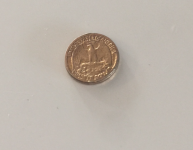 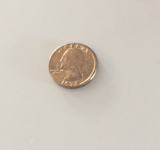 gold plated
You must log in or register to reply here.

Help with a guestimation?