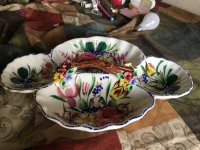 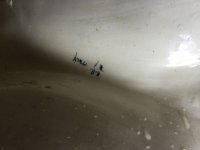 Any help would be great

Just browsing around and spotted this. Old post, I know, but unanswered.

It’s a generic/unsigned Italian workshop piece with the importer mark for Koscherak Brothers of New York. They began importing fine ceramics and glassware in 1895, operating as a wholesaler to high-end department stores and boutiques (Bloomingdale’s, Macy’s, B. Altman and such), and had a major showroom on 5th Avenue.

Mid 20th Century and more the kind of thing that would be bought now to use, rather than a collector’s piece. It looks a reasonable size, so I would say somewhere in the region of $25-$30
You must log in or register to reply here.