I returned to my friend's house that was built in the 1700s for a second hunt. This time he shared a family story prior to my hunt. He stated that his great grandparents, who once owned the house, also owned a local tavern in the early 1900s. At the tavern they had slot machines. You placed your money in the slot machine, and winnings were paid by the machine in tokens. You would then cash your winning tokens into the bartender who would pay you out in cash. After being open for some time, his family members began to suspect patrons were counterfeiting the tokens. Ordering replacement tokens, his great grandfather took the original tokens and tossed them in the fields as he plowed, according to family lore. Having not found any tokens during my first hunt, only a sweet Mercury dime and some wheaties, I thought his story was probably just that, a story. That is until I hit a five foot square patch were I found all of these "Gordon's" tokens in 5, 10, & 50 cent denominations. If you look closely at the two 50 tokens, the font of the numerics is different, wonder if one of them is counterfeit. I also found a silver ring and what I think is a silver plated handle from a pair of fact scissors. I returned everything to my friend and suggested that he hand them out a stocking stuffers to the remainder of the Gordon family for Christmas. 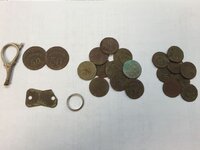 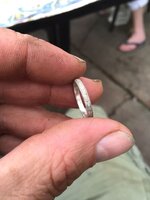 Cool story regarding the tokens and great find! What are "fact scissors" (or did you mean grape/fruit)? I found a very similar silver plated piece from a pair of scissors just like yours.
Last edited: Jun 30, 2015
OP

Oh OK. I looked on eBay and these types of silver plated cast ornate scissors seem to be called "grape (or fruit) scissors." BTW, you can click on the edit button at the bottom of your post to correct it.

Rather than handing out those tokens, please consider putting them in a framed display to put on the wall. It would make a compelling piece of history and they wouldn't get lost again.

Here's the same piece from a similar pair of silver plated cast scissors that I found a couple weeks ago.

Thank you for the advice on editing posts. The grape scissors identification is amazing. Who would have thought that it would be common for scissors to break in that fashion

Agree. I had no idea what they were called until today. It was your misspelling of "fact scissors" that made me Google and come up with nothing LOL and then I decided to check eBay for "silver plated scissors" and there they were. First piece like that I've found in 15 years detecting. I did a double-take when I saw your similar piece broken in exactly the same location. I guess it was a stress point on them if the vine/stem was too thick. They are both quite pretty pieces though.

I'm surprised more people haven't commented on your cache token find. Maybe post a pic of them all laid out in a matrix. I'll get there are a lot more out there. It's a great find and deserves to be framed. Very nice of you to give the finds to your friend!

PA Sleuth said:
Thank you for the advice on editing posts. The grape scissors identification is amazing. Who would have thought that it would be common for scissors to break in that fashion
Click to expand...

Nice digs, I like the dog tag, what the year.
T

Those slot machine coins are really something else there.I wonder how popular those slots were back in those days.Your ring is very nice also.
OP

1974 for the dog tag
You must log in or register to reply here.

A few mixed relics this afternoon (one with teeth)